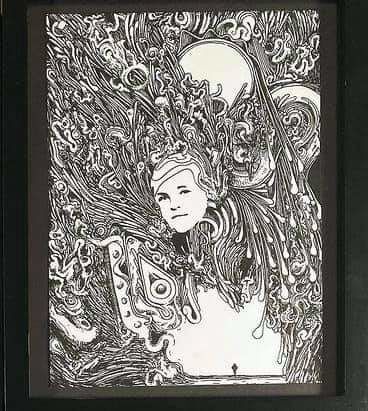 “Self-Portrait” is one of five pieces in the Caleb Garrett Collection currently on display at the Dawson Springs Museum and Art Center. 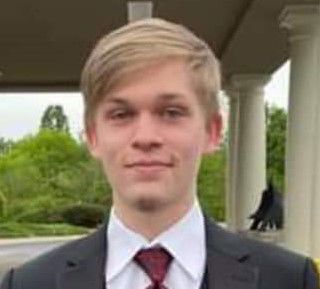 “Caleb’s art was featured in the school’s student show in the spring, and we have been lucky enough to hang on to five of his pieces for display,” said Virginia Chaney, a member of the museum’s Board of Directors. “He won the technical skill award in Hopkinsville’s 2020 Sean Wallace Encouraging Art Contest.”

“I have since branched out to painting and drawing on everything from shoes to desks to Rubik’s Cubes,” Garrett said. “I have five works on display at the museum. I tried to select five drawings that were completely different from each other to display the many styles that I like to work in.”

“I have an urge to outdo my previous works — scaling up the detail, size, and creativity,” he said.

Cindy Crider, who served as the art teacher for the Dawson Springs Independent School district for 30 years before she retired in June, is proclaimed by Garrett as one of his greatest supporters.

“She gave me extra time in class to work on my own projects and always got excited when I broke the ‘rules’ of art,” said Garrett. “I am very thankful and was very lucky to have her as my art teacher and friend.”

For Crider, the feeling was mutual.

“When I asked him to bring in a few examples of his artwork, my jaw dropped — he had developed such a unique style for his age,” Crider said. “His creativity and attention to detail allow the viewer to see many intricate hidden details within his art.”

The Dawson Springs Museum and Art Center is open Tuesday through Friday from 1 to 4 p.m. There is no admission fee. To see more of Garrett’s collection, fans can also follow the aspiring artist on Instagram @activeink03.