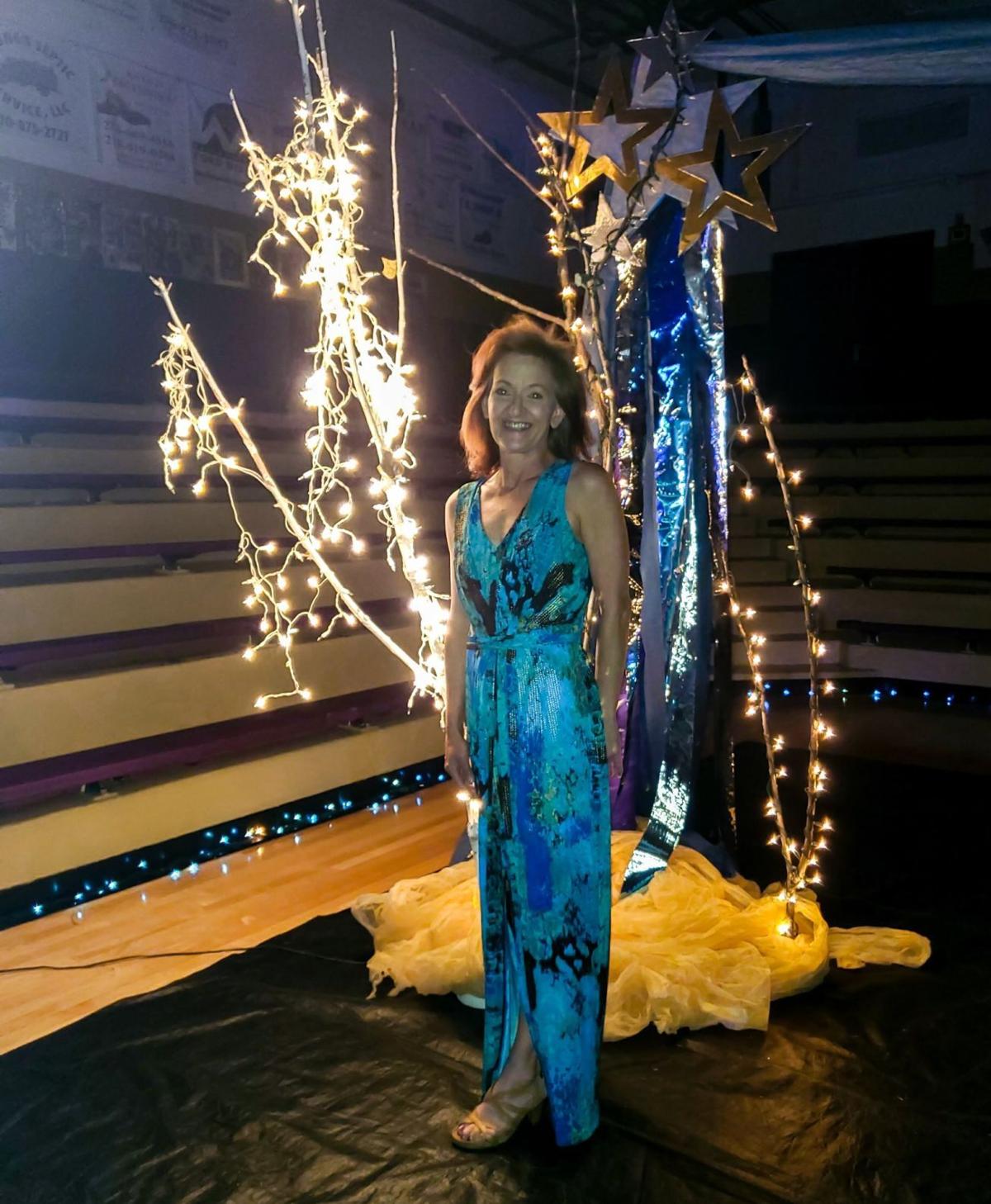 Cindy Crider coordinated her 27th and final prom at Dawson Springs High School on Saturday night. The theme was “A Night Under The Stars.” 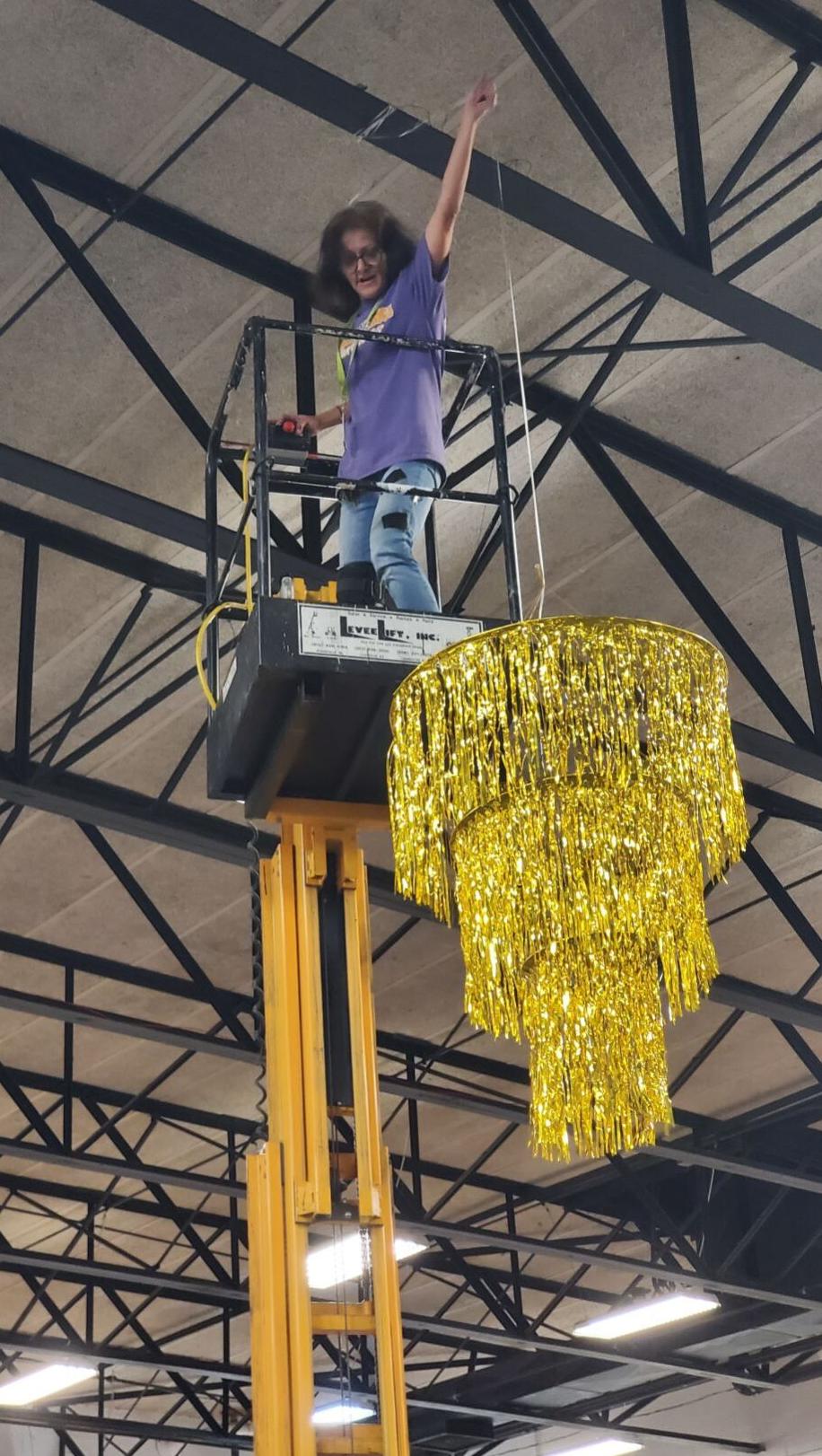 Cindy Crider hangs a chandelier last week in preparation for the 27th prom she has served as junior class sponsor and prom coordinator. After almost 31 years as the district’s art teacher, Crider will be retiring from Dawson Springs at the end of the school year.

Cindy Crider coordinated her 27th and final prom at Dawson Springs High School on Saturday night. The theme was “A Night Under The Stars.”

Cindy Crider hangs a chandelier last week in preparation for the 27th prom she has served as junior class sponsor and prom coordinator. After almost 31 years as the district’s art teacher, Crider will be retiring from Dawson Springs at the end of the school year.

In the movie “27 Dresses,” actress Katherine Heigl portrays a character who served as maid of honor in 27 weddings. For Dawson Springs Independent’s district art teacher Cindy Crider, the most elegant night of the school year — prom — has been all hers 27 times.

Hired to teach art in grades K-12 in 1990, Crider moved to Dawson Springs from her hometown of Columbia, Kentucky. With close to 31 years of service to the Panthers, she plans to retire effective June 30.

“When I was first hired, teachers were assigned as sponsors to the upcoming freshman class and stayed with that group all four years, enjoying the trials and tribulations of planning prom, senior trip, and graduation,” said Crider. “Since I found myself helping out every year, our principal at the time — Ms. Teresa Ashby — suggested I become a continual junior sponsor and a prom coordinator was established.”

Coordinating prom as a junior class sponsor is an extra duty that calls for planning during an entire calendar year.

“Sponsoring prom means fundraising during junior year,” Crider said. I keep a budget of $1,000 to $1,500. to put on prom — which includes, food, decorations and music. The prom catalogs start arriving in January. Interested juniors sign up for the prom committee, get ideas, vote on a theme, and colors.

“Once a theme is established, materials are ordered and most decorations aren’t made until the week before prom — the juniors blindly follow my instructions of tracing, cutting, gluing and painting and are excited to see it all come together,” she said.

Self-proclaimed as frugal, Crider recycles many of the materials used from proms past, and her storage game is strong.

“When I first started helping with prom, expensive kits were bought, constructed and thrown away — kits that were nothing more than patterns, instructions, shiny paper and glitter — such a waste of money,” said Crider. “As I became more involved, the juniors would look for ideas and we would make the patterns ourselves.

“Through the years, I have kept certain materials that have been used for other events within the school and community,” she said. “When the school built the outdoor classroom and storage building, they graciously allotted some space for prom storage.”

Stars from Saturday evening’s “A Night Under the Stars” featured stars used in Prom 2003 — which was hosted by the Class of 2004. Yards of material in varying shades of blue were also utilized, recycled from the Class of 2014s junior prom in 2013.

The first prom under her direction was 1993’s “Drift Off to Dream,” which had an underwater theme.

“The most fun and creative theme was the 2012 prom, ‘A Night to Die For,’ celebrating the Apocalyptic prediction of the Mayan Calendar foretelling the end of the world — it was such a current event at the time and so menacing,” said Crider. “We decided to create a Mayan temple with lava flowing down the sides and a beautiful walkway with arches — if it was going to be our last prom, we had to make it memorable.”

“Shades of blues and teals created the illusion of the bottom of the sea, the ruins of Atlantis, with sculptures and a glittery sunken ship,” said Crider. “Both groups of juniors were full of amazing artists that created some fantastic detailed decorations.”

During the past 27 years, prom has been held in three locations — in the multi-purpose room of the high school, at Pennyrile Forest State Resort Park, and in Panther gymnasium.

“The gym is my preferred spot because it is more efficient — work smarter, not harder,” Crider explained. “Decorations can be utilized for both promenade and prom, and all students are kept on campus and easily contained.”

“Both of my daughters have been very active in prom construction since they were babies — going where mom went,” said Crider. “During prom construction, I remember them falling asleep on students at 1 a.m. in the morning, chasing the balloons around the gym floor, riding on the lift to the ceiling, but most of all, they loved the transformation of cardboard and paint into a castle or some other fanciful creation.

“When it became their junior year and they got to be a part of the decision making and working nights the week before prom, they loved it even more — it was finally their time,” Crider said. “It was finally their turn after all those years, and I got the added bonus of working with them during that week and seeing them dressed up and beautiful.”

Crider knows it takes a group effort to pull off a prom to remember.

“I might be the creative force behind the prom and get the accolades for pulling it off again for yet another year, but I couldn’t do this without the other junior sponsors and staff members who just volunteer because they know it’s a big job,” Crider siad. “This is truly a remarkable school and community, and I have been so blessed to be a part of it for the last 30 years.

“I may have left my mark, but this school has left a mark on me as well. It’s surreal thinking this was officially my last prom.”