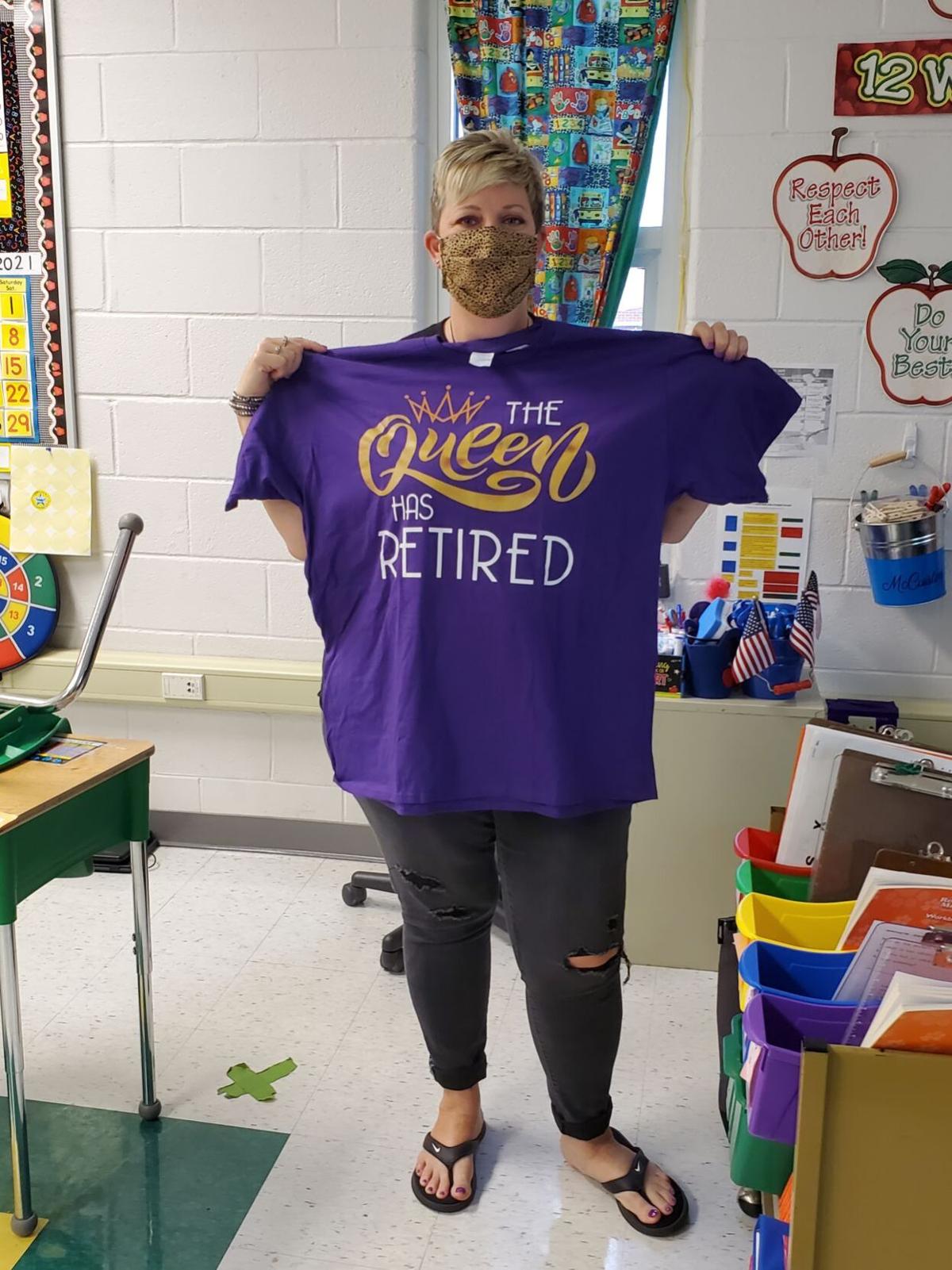 Directly above the school office on the second floor in her first grade classroom, teacher Marcella McCuiston proudly displays the shirt she and the other retirees would be wearing to their retirement reception. 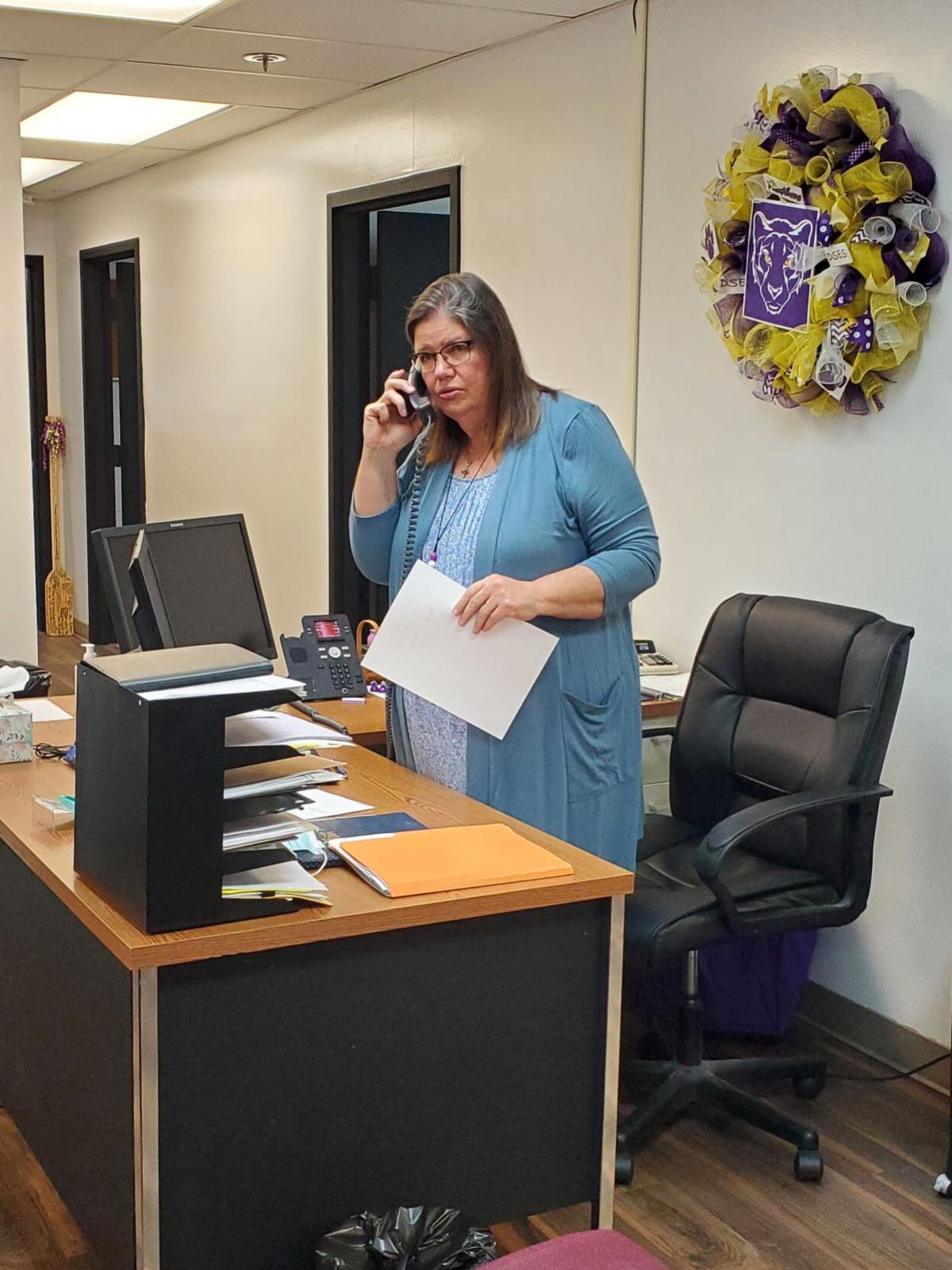 Mere yards from the welcoming committee, another retiree, elementary secretary Ashley Marsili, fields phone calls to help make the last morning of school for students go as smoothly as possible.

Directly above the school office on the second floor in her first grade classroom, teacher Marcella McCuiston proudly displays the shirt she and the other retirees would be wearing to their retirement reception.

Mere yards from the welcoming committee, another retiree, elementary secretary Ashley Marsili, fields phone calls to help make the last morning of school for students go as smoothly as possible.

It appears to be retirement season locally, with no entity realizing that more than Dawson Springs Elementary School.

With over a combined 145 years in education, Tammy Audas, Cindy Crider, Marcella McCuiston, Ashley Marsili, and Terri Freeman are retiring effective June 30, but all managed to enjoy their final day with students last on May 26.

Audas is retiring from her current post as the elementary school’s Response to Intervention reading teacher.

“I worked as an aide in a special education classroom for several years and realized that that was where my heart was leading me,” she said in regards to her decision to become a teacher.

Most Panther parents recognize Audas as the staff member who greets their child at the door each morning, welcoming them to school. She has received an entire generation of students as they exit their cars to enter the front door of the elementary school, which houses preschool through sixth grade. Her greeting of a hug, a high-five, fist bump, or a dance to the oldies playing on her boombox is special to Dawson Springs, and like the parents who appreciate her efforts, she will miss her morning routine.

“I will miss those sweet little smiling faces and all my morning hugs,” Audas said.

She lists the current situation with the pandemic as the factor behind her decision to retire from Dawson Springs Independent Schools.

“This year has been a very tough year with COVID,” she said.

However, Audas plans to remain in the education game. “In the fall, I will be teaching first grade at Christ the King in Madisonville,” she said. “I am very excited.”

Dawson Springs is a special place to Audas.

“I just felt like it was the right time for a change,” she said. “I have been a Dawson Springs Panther for many years, and I will always cherish my years there — the students and staff are like a second family.”

Crider was hired in 1990 as the district’s art teacher, serving students in kindergarten through twelfth grade. While her classroom is located in the Jr./Sr. High School, she can often be found helping elementary students reach their classrooms before the first bell rings, which is how she spent that last morning — proving that her retirement will have a districtwide effect.

“She’s just a couple days shy of 33 years,” said Superintendent Leonard Whalen referring to Crider’s tenure in Dawson Springs. “Ms. Crider is somebody that’s so committed to the school district and the kids--just massive shoes to fill for whoever comes in and takes that over--just a giant in the Dawson Springs Schools.”

“I don’t want to see her go,” he said. “We go to her when we need something decorated, we need banners made, we need a hoop for the ballgame, or have a question — and that’s just gone.”

“Except for about 12 years of my entire life, I have been a part of Dawson Springs Schools,” said McCuiston on her last day with students. “I started in Kindergarten and graduated in 1989 from Dawson Springs High School — teaching and education has been a part of my life for 45 years and it always will be.”

McCuiston was initially hired as a teacher for Hopkins County Schools, but transferred to Dawson Springs early in her career to teach first grade — where she remained until her retirement. She completed year 27 last week.

“Seeing children grow and learn is just amazing,” McCuiston said of her goal of becoming a teacher. “ I taught Sunday School and Bible School at a young age and knew that I wanted to continue that.”

Several factors played a role in her decision to retire.

“I just can’t handle the stress of having two different households and families to care for and manage,” she said. “The paperwork — the demands and expectations of my personal time — just wore me out.”

McCuiston sees her first graders each year as if they are a second family.

“I love the children,” said McCuiston. “It was never because I didn’t want to teach the children.”

Her younger son, Carlton, graduated from DSHS that same night. With both sons now out of school, McCuiston has plans.

“I may want to be a substitute after a while of taking a break, but I love to fish, be with my family and scrapbook,” she said. “I am planning on working at Hobby Lobby.”

“I will always be a Panther,” McCuiston concluded.

Marsili has been an important component of the Panther tapestry for many years, most recently as secretary for the elementary school.

“In addition to my regular duties, I also take care of procuring substitutes for the teachers and instructional assistants,” Marsili said.

Technology has evolved quite a bit since she first joined the Panther staff.

“She was amazing and taught me so much,” she said. “Of course the other part of the job was very interesting too since it involved ‘telelinking’ with other schools, museums, and facilitating the Murray State University’s night classes.”

She compared her position of coordinating classes with the KTLN to the present time.

“Now those would be online or done with Team or Zoom meetings,” said Marsili. “The students loved it.”

When contemplating retirement, Marsili took some advice to heart.

“I’ve always heard that you will know when it’s time to retire and I believe that,” she said. “My plans for retirement are many: reading, traveling, relaxing, seeing our grandchildren more, doing some things around the house that have been put off for way too long — one of the biggest things will be not setting an alarm clock for 5 a.m.”

Twenty-three years ago, Terri Freeman was “contracted by our school to provide day care services in 1993.”

“It was licensed for 46 children and we operated with financial support from FRYSC for eight years,” said Freeman. “I was later hired for my current position with this being my 15th year.”

Freeman is retiring as the secretary for Districtwide Programs.

“Ms. Terri has been a staple in her current position for many years,” said Kristin Merrill, Coordinator of Districtwide Programs. “When I posted the job description, she said, ‘Heck, I would never have applied for this job description,’ but she does it all and has figured out how to manage many hats.”

Freeman has been Merrill’s right-hand during Merrill’s entire time with the district.

“She has no idea how much she does just because she has learned it and it comes natural since she figured out a system to all our madness,” Merrill said. “She is my saving grace and I will forever miss her.”

As for Freeman’s retirement, “I plan to throw away my alarm clock first thing, and I foresee lots of beach trips with Tammy Audas (her sister) and (retired Dawson Springs teacher) Jamie Brantley.”