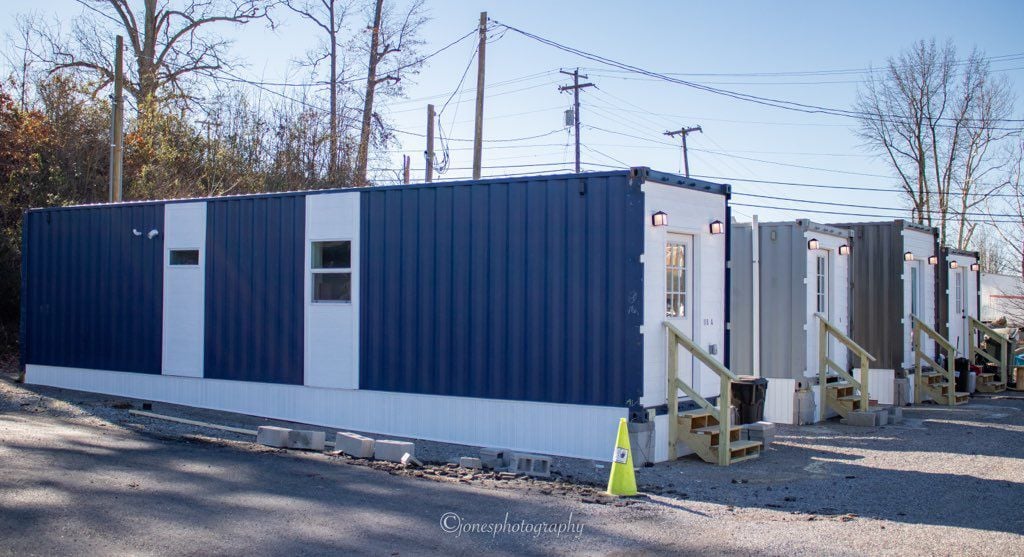 Four “Eko” houses made from recycled shipping containers sit to the immediate right of the Dawson Springs Board of Education property on Arcadia Avenue.

Four “Eko” houses made from recycled shipping containers sit to the immediate right of the Dawson Springs Board of Education property on Arcadia Avenue.

Since an EF-4 tornado ripped through Dawson Springs on Dec. 10, Dawson Springs Public Schools have been the heart beat of the community. Within minutes of the storm, school officials were welcoming victims into their buildings, providing emergency medical assistance to the injured and housing those who had lost everything.

In the month since, the school has operated as a collection and distribution location for food and supplies for those in need. Despite all of the work being done by the county and FEMA, for many local people, the school system became the go to place not just for their personal needs, but for their hope for the future.

Perhaps one lesser known fact about the schools is that since the tornado hit, school property has also been utilized to provide housing for some of those in need.

Currently, four “Eko houses” are located side-by-side on school property next to the Board of Education building on Arcadia Ave. Made from recycled shipping containers, each of these structures consists of a kitchen, bathroom, shower, and bedroom, and sleeps three to four people.

Four families displaced by the tornado are occupying the houses, including the school district’s Director of Transportation, LaDonna Hooper, and her family. The Hoopers lost their home on Locust St. during the Dec. 10 tornado. According to the corporation’s chairman, Mark Jensen, the City of Dawson Springs determined which families were placed in the temporary units and are rent-free for the first six months.

During a meeting earlier this week, Board member Wes Ausenbaugh made a motion to authorize Whalen as facilitator in regards to utilizing district-owned properties, mainly the corner of Hickory Street and the land between the gym’s parking lot and the bus compound for additional temporary housing “as a last resort.”

“Eighteen of our staff members lost most everything,” said Whalen, describing the destruction of the tornado.

If the issue arises, Whalen will be collaborating with American Resources Corporation to provide the lots for additional temporary housing options.

“This would be like the units next to the Board of Education office,” he said.