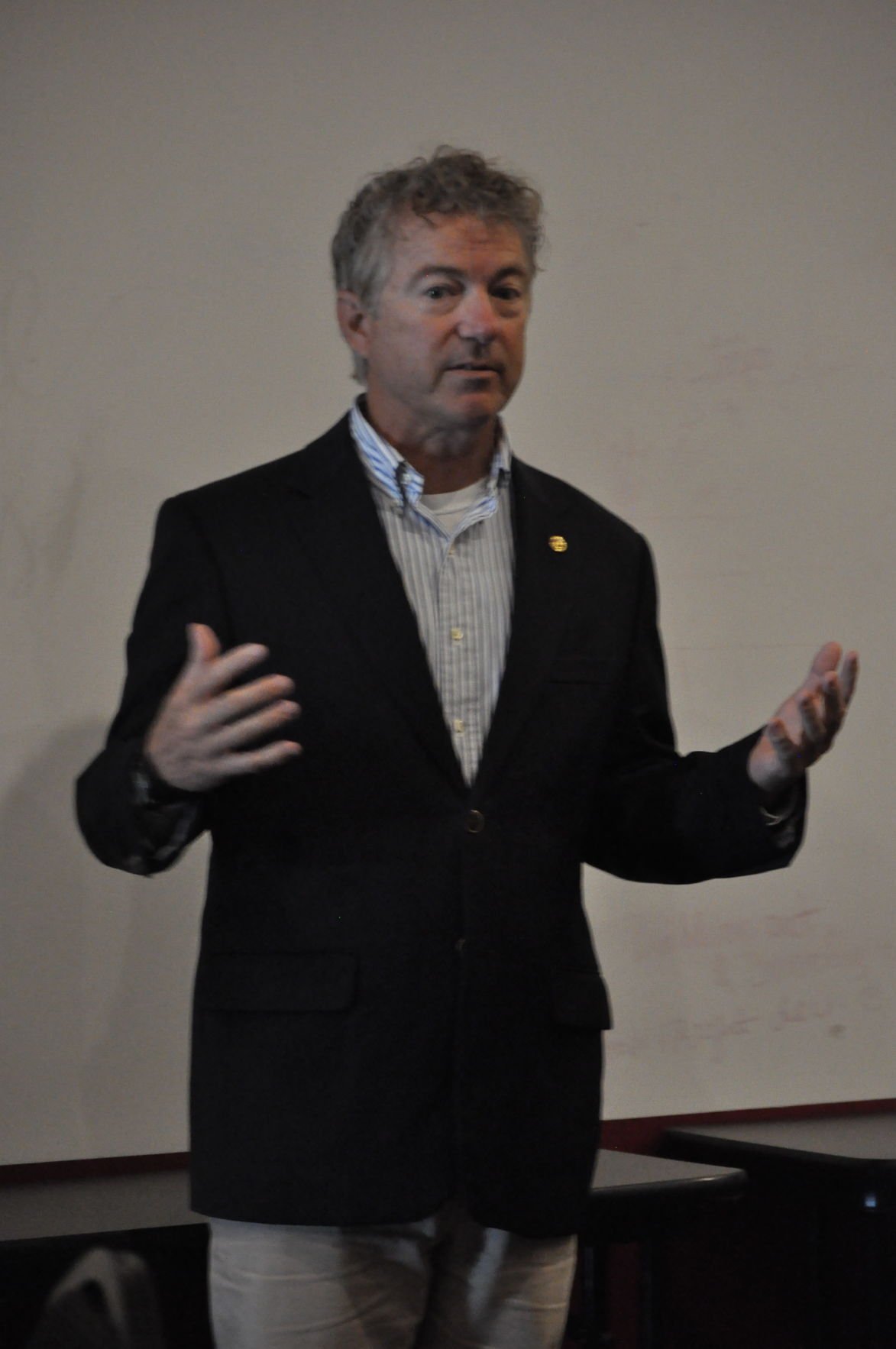 U.S. Sen. Rand Paul visited Madisonville on Wednesday to meet with community leaders to discuss what he could do in the senate to improve Kentucky. 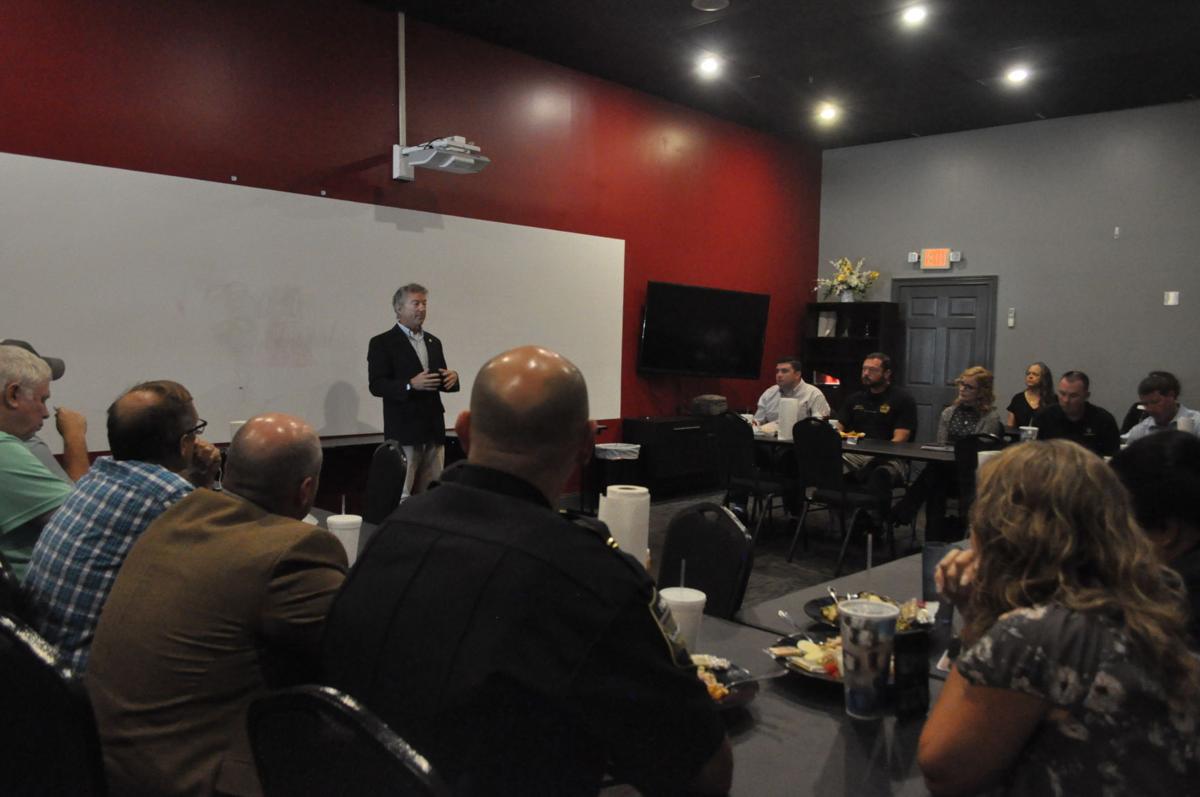 U.S. Sen. Rand Paul opened the floor to questions and comments during his meeting with the community in Madisonville on Wednesday.

U.S. Sen. Rand Paul visited Madisonville on Wednesday to meet with community leaders to discuss what he could do in the senate to improve Kentucky.

U.S. Sen. Rand Paul opened the floor to questions and comments during his meeting with the community in Madisonville on Wednesday.

U.S. Sen. Rand Paul stopped in Madisonville Wednesday to meet with community leaders and constituents during a five-county tour across the western part of the commonwealth.

The Madisonville stop was the third of several for Paul, who also had appearances scheduled in Calhoun, Beaver Dam, Greenville and Morgantown.

Paul spoke at Brother’s BBQ on a variety of topics, including COVID-19, his thoughts on mask-wearing and vaccinations before opening the floor up for questions.

Kentucky’s junior senator has been an outspoken critic of mask mandates. He said there has been no evidence the mandates have changed the incidence rate of COVID-19.

However, according to the Centers for Disease Control’s website, masks do help create a barrier to prevent respiratory droplets from reaching others when worn over the nose and mouth. How effective the mask is, depends on how the mask is made, the fabric used, and how well the mask fits.

Paul is a supporter of the COVID-19 vaccine, but believes it should be an individual choice.

“The good news is that 90% of people over 65 have gotten vaccinated,” he said. “I think that was the right decision to make.”

On Wednesday, the Hopkins County Health Department reported 406 new COVID-19 cases, bringing the number of active cases in the county to 1,655. There have been 4,965 people who have recovered from COVID-19 locally and 164 people have died from virus-related complications in the county.

During the meeting, Paul did advocate for the monoclonal antibody treatment, which hospitals are using to help treat symptoms of COVID-19. The treatment has to be used early on in the COVID-19 diagnosis to be helpful.

“It can save lives, but if you wait too long, you are no longer eligible for the treatment,” said Paul.

Paul opened the floor up to questions from those in attendance.

One individual in attendance asked Paul about his thoughts on the United States exit from Afghanistan, and if the Senate will shine a light on the inept exit.

Paul called the exit a disgrace and said it will haunt the administration. He did agree with pulling the troops out, but said there was a lesson to be learned.

“Many are saying we left too soon. I think it isn’t that we left too soon, it is that we stayed too long,” said Paul. “We tried to create a country out of a country that has been a bunch of different tribal regions.”

He said he would bring the matter of investigation up next week to U.S. Secretary of State Antony Blinken.

“There will be a chance to ask questions, but they usually evade the question,” he said. “I don’t think Congress will investigate them because President Biden’s pawrty controls all the committees.”

Hopkins County Magistrate Ronnie Noel was able to ask one of the last questions to the senator before the meeting ended. He asked about the Kentucky school choice bill, which would create a tax fund allowing parents the option of sending their kids to different school districts or private schools.

Paul said he had a bill in the works that would help keep money with the students, whether they went to private or public school, and would follow the child throughout the school years.

“It is primarily the money that comes from the federal government to the school districts that is for poor children, Title 1 funds,” he said.