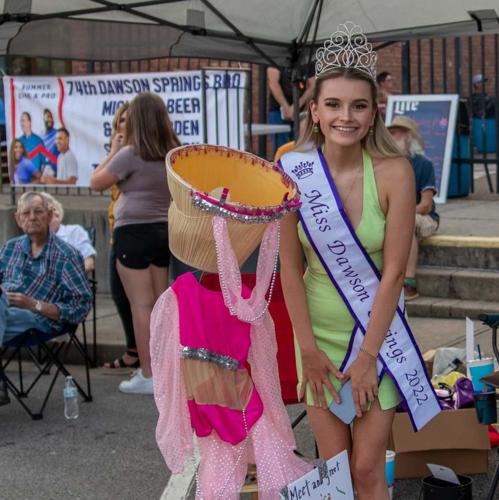 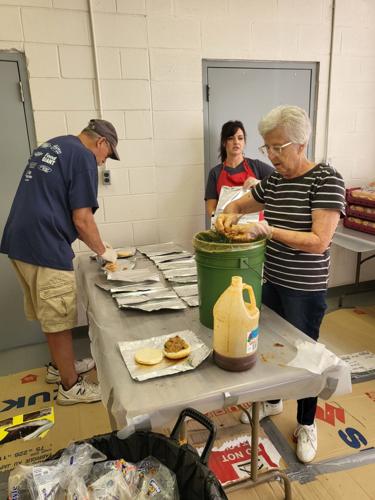 From left, Joe Allen, Lindsey Morgan, and Virginia Chaney prepare sandwiches to sell at last Friday’s Dawson Springs BBQ. The annual event benefits the Dawson Springs Community Center. Allen and Morgan are members of the center’s Board of Directors. (Photo by Cassie Ipock) 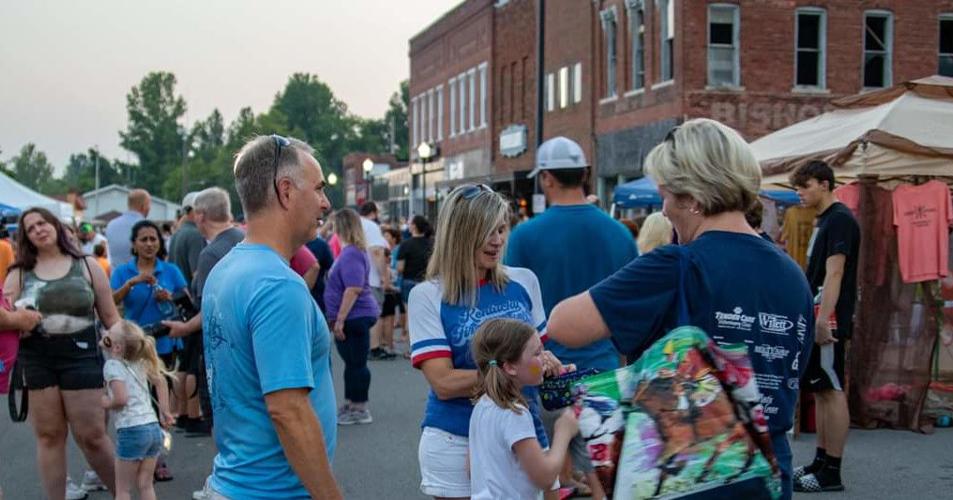 A large crowd braved the heat to enjoy the street fair portion of the 74th Annual Dawson Springs BBQ along Railroad Avenue on Friday night. (Photo by Jason Jones)

From left, Joe Allen, Lindsey Morgan, and Virginia Chaney prepare sandwiches to sell at last Friday’s Dawson Springs BBQ. The annual event benefits the Dawson Springs Community Center. Allen and Morgan are members of the center’s Board of Directors. (Photo by Cassie Ipock)

A large crowd braved the heat to enjoy the street fair portion of the 74th Annual Dawson Springs BBQ along Railroad Avenue on Friday night. (Photo by Jason Jones)

Many Dawsonians past and present braved the heat to celebrate the 74th Annual Dawson Springs BBQ last Friday.

It was the first major event held in the town since it was ravaged by an EF-4 tornado on Dec.10, so celebration was indeed the name of the game.

“While we are still calculating financial totals — based on raffle and meat sales — this year’s BBQ was a huge success,” said Lindsey Morgan. Each year, residents of the small community unite to raise funds for the Dawson Springs Community Center. Morgan is one of the center’s Board of Directors.

The town may be small, but the efforts of the BBQ’s volunteers are vast. 3,600 pounds of meat went onto the pits at around 7 a.m. Thursday morning, July 21. The Knights of Columbus stood watch over the pits until early Friday morning--about 22 hours of cooking--when the Boston butts were transferred to the community center for shredding. A room full of folks were on-hand to help ensure that the meat was prepared to sell by 11 a.m. After the shredding, the meat was made into sandwiches, packaged by the pound, or added to trays for nachos. Starting at 11 a.m., BBQ attendees were served lunch, while a handful of volunteers operated a make-shift drive-thru on Keigan St. during the lunch rush. Everything was packed up and transferred to the street fair by 6 o’clock. From 6-9 p.m., there were 46 vendor and game booths operated by volunteers fundraising for the community center and other Dawson Springs organizations. At 8:30, the drawing for the raffle’s 38 prizes began, following a week-long ticket sale by members of both the community center’s Board and the Dawson Springs Rotary Club. When the street fair ended, a small crew cleaned Railroad Avenue by streetlight until no traces of the fair were left.

The winner of the raffle’s $500 grand prize, who wished to remain anonymous, donated the winnings back to the community center. The grand prize was sponsored by the Plastic Surgery Center/Dr. Garth Smith of Madisonville.

BBQ by-the-pound was sold out by 5 p.m. The sandwiches ear-marked for the street fair were gone by 7 p.m. Trays of BBQ nachos were wiped out by 8:15. Around 80 sandwiches held for Saturday’s Dawson Springs Cars & Coffee’s BBQ Car Show were all sold in a 15-minute time frame. “We were down two pits due to tornado damage this year,” Morgan said. “Donnie measured the pits and calculated the precise number of Boston butts which would fit — there wasn’t space remaining for one more.” Donnie Mills leads the charge of cooking the meat each year.

As of press time, the only remnants of the 74th Annual BBQ were 21 pints of sauce and two commemorative shirts. Those wishing to purchase bottles of the sauce can stop by Beauty Shop on the Square during business hours. A pint of sauce is $6. To claim one of the remaining shirts, both sized medium, comment on the Dawson Springs Community Center’s post on Facebook. The shirts are $15 each and proceeds from the 2022 shirt sale went to the Dawson Springs Independent Schools’ Family Resource Youth Services Center (FRYSC).

Many of Dawson Springs’ citizens refer to the fourth Friday in July as “BBQ weekend,” and for good reason. Saturday boasted events such as the annual BBQ 5K, golf scramble, and car show, while a host of class reunions were conducted on both Saturday evening and Sunday afternoon.

Donnie Dunbar, who organizes the Dawson Springs BBQ 5K annually, announced the winners of the race. Each received a medal during the ceremony following the event. Overall race winners in the age 4-39 category were James Maglasang, who finished with a time of 16.26, and Kate Keller, 20.41. Winning overall in the 40-plus age bracket were Jared Southerland, 20.16, and Ursula Dugger, 29.28. Keller, Southerland, and Dugger claimed course records as well.

The champions of the 2022 installment of the BBQ Golf Scramble held at Pennyrile Forest State Resort Park were announced by Reed Smiley, who helped organize the event. The team of Chad Audas, Phillip Cotton, Dennis Crook, and Kolby Crook tied for first place honors with the team of Jeff Jennings, Owin Riley, Schyuler Storms, and Addison Whalen. There were also various challenges conducted during the tournament, and those winners were: Ashley Bailey, longest drive; Jonathan Arms, longest putt; and Grayson Brewer, Chase Dawson, KO Taylor, and Tommy Larimore, closest to the pin.

Joe Allen, who also sits on the community center’s Board of Directors, announced the trophy winners of the BBQ Car Show, which was hosted by Dawson Springs Cars & Coffee. Ross Nash of Oregon was selected as the People’s Choice, and Blake Stewart won Mayor’s Choice.