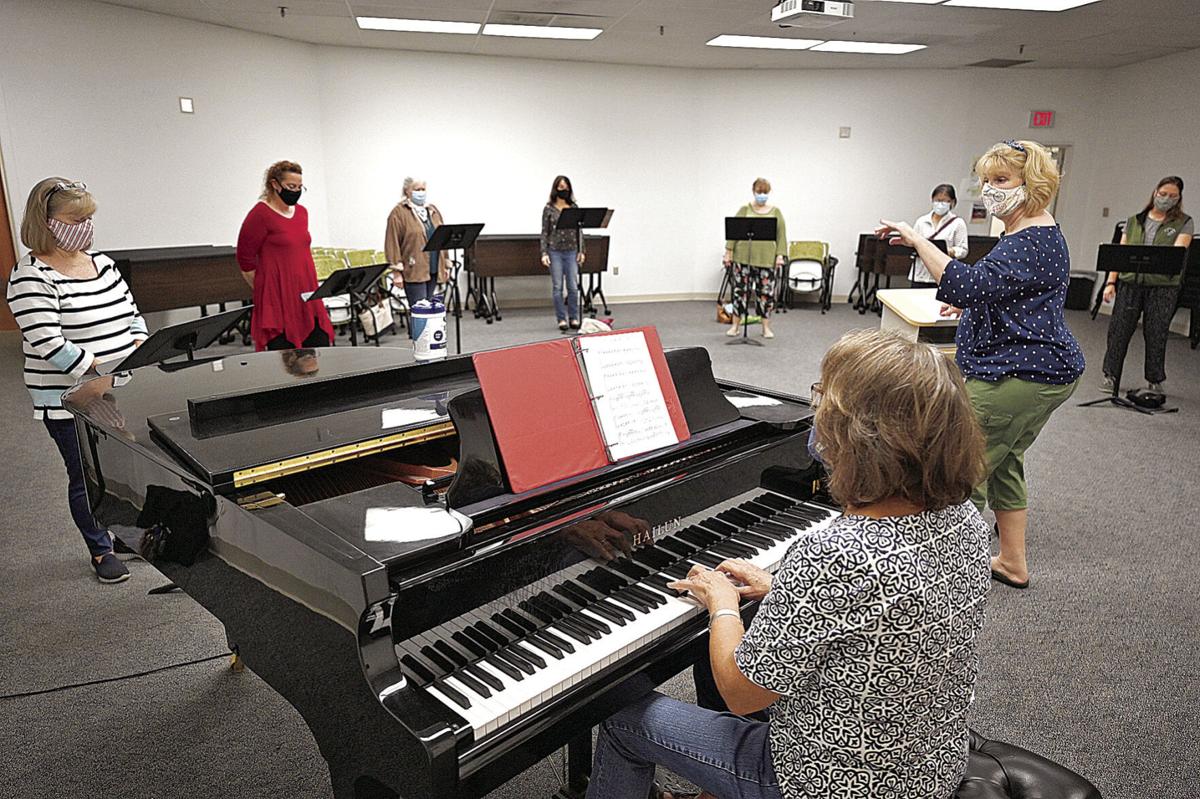 The Choral Arts Society of Frederick artistic director Lynn Staininger leads choir members as Carroll Howe plays piano and sings during their first rehearsal back since March at Frederick Community College on Sept. 29 in Frederick, Md. 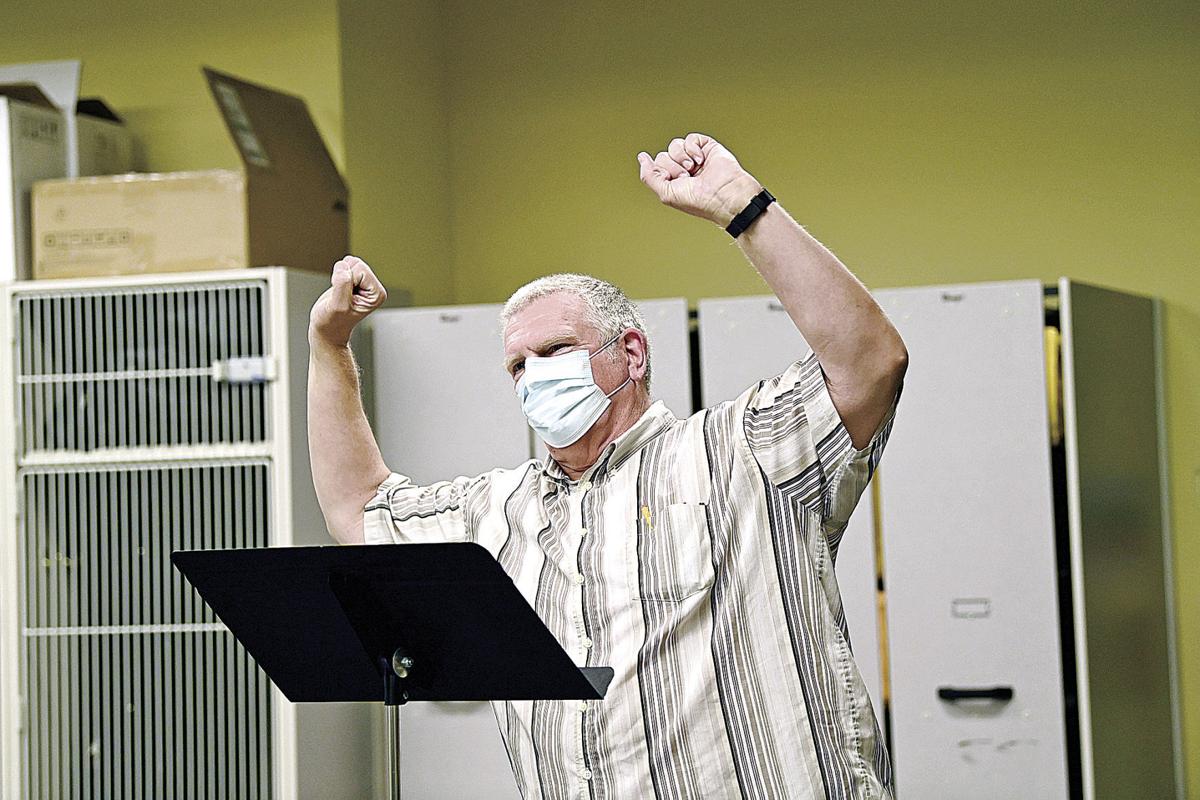 The Choral Arts Society of Frederick artistic director Lynn Staininger leads choir members as Carroll Howe plays piano and sings during their first rehearsal back since March at Frederick Community College on Sept. 29 in Frederick, Md.

At 7:03 p.m. on a recent night, conductor Lynn Staininger asked the pianist to sound the correct pitch. She counted to three and the Frederick County classroom filled with song.

The choir’srendition of “Angels We Have Heard On High” sounded less than heavenly, especially the wavering alto line that Staininger described as “gnarly.”

But it was the first time that choral members had rehearsed together since March, when the coronavirus was declared a pandemic and forced everyone into quarantine.

“How is it breathing through the masks?” Staininger asked the eight women spaced at least six feet apart around the room.

“I’ve had worse,” someone replied, before the small group turned to more prosaic musical issues, such as enunciating “In excelsis Deo.”

The Choral Arts Society of Frederick pushed ahead with its first group rehearsal in more than six months, meeting for short sessions and in small groups as part of the guidelines imposed by its leaders and Frederick County Community College, where they practice. They were also mindful of the tragedy that touched another choral group this year when several members became sick after a rehearsal.

There are about 80 members in the choral group, but only about 20% of the choir elected to sing. All appeared to be fine a week later, despite a health scare involving one member who came down with a covid-19-like illness but ultimately tested negative for the coronavirus. They sang in groups of 10 or less for no more than 30 minutes.

“A lot of other basses are afraid to come back,” said Jeff Fishman, 67, a home inspector who lives in Frederick and leads the bass section. Fishman, who sang with a mixed group of four women and three men, said he had missed the group practices so much that he thought the rehearsal was worth it. “Life’s all about calculated risks.”

For choirs and choruses, the risks of contracting and spreading the coronavirus through singing are particularly high. Last month, the virus sickened at least 30 of 41 members of the River Troupe Gospel in northeastern Spain following a rehearsal. Poor ventilation is thought to have spread the virus despite the singers’ taking other sanitary precautions.

Far worse happened after the virus swept through a rehearsal last spring by the Skagit [pronounced SKADGE-it] Valley Chorale in Washington state. Of 61 members who attended a 2½ hour rehearsal March 10, 52 members contracted the coronavirus, including three who were hospitalized. Two members died.

Although that group took several precautions, even the smallest gestures of communal courtesy, such as offering refreshments or putting one’s folding chair away, helped weaponize the virus’s ability to spread, according to analysis by the Centers for Disease Control and Prevention, which characterized the rehearsal as a superspreader event.

“It was really terrible,” Adam Burdick, the Skagit Valley group’s artistic director and conductor, said. Burdick said although less was known about the disease at the time, he had a premonition that it would be unwise to rehearse that night. He went ahead because many members still wanted to get together as part of their preparation for an upcoming tour to Europe. He said members still struggle with their shock and grief over the event.

“The first thing that I would say is that I don’t think it’s safe for groups to get back together,” Burdick said. “I don’t think they should be considering that,” he said.

Last week, the CDC confirmed that people can become infected with the coronavirus through airborne transmission, especially in enclosed spaces with inadequate ventilation. The risk is high because the virus can remain suspended in tiny droplets and particles for minutes or hours, the agency said.

Several national organizations of choral groups commissioned research that points to the same conclusion and suggests there are significant risks for transmitting the coronavirus among singers. The groups also developed a number of practices to minimize risks for choral groups that want to resume their work. The protocols include holding brief rehearsals of no more than 30 minutes, preferably outdoors without enclosures, enforcing social distancing and requiring masks.

“We do have a number of groups around the country that are rehearsing in that manner,” said Allen Henderson, executive director of the National Association of Teachers of Singing, which is based in Jacksonville, Fla. “They’re distanced. They’re singing with masks, even outdoors.”

If rehearsals are held indoors, chorus members should be even more cautious, paying close attention to the size of the space and ventilation, Henderson said.

Yet the guidelines also hamper the ability to sing. It’s difficult for singers to breathe with masks, even when using long conical ones resembling birds’ beaks that are specially designed for singing. Spacing chorus members far apart can make it more difficult to harmonize and dissipate the overall volume.

Before resuming rehearsals, the Frederick choral society’s board considered the risks and the best precautions to take before proceeding, president Brenna Hill said. The Choral Society of Frederick, which traces its history back to 1943 — last sang together right about the time of the ill-fated rehearsal with the Skagit Valley chorus.

“That is what made choral musicians’ blood run cold because we were all still rehearsing in March,” Staininger said. “And you either thanked God on your knees that you had stopped rehearsals or that you were just about to stop rehearsals.”

After surveying members, the choral society’s leadership decided to resume rehearsals so the group could perform holiday carols in public. Although there is no immediate financial pressure, Staininger and others also worried about the long-term impact on their organization if the hiatus continued indefinitely.

“There is a finite point at which arts organizations, if we don’t get support from grants and the state, were we just have to cease to exist,” Staininger said.

For the Frederick group’s Sept. 29 rehearsal, eight female singers met at 7 p.m., accompanied by a pianist and led by Staininger in a classroom in the school’s visual and performing arts center; another group of seven met at 7:40 p.m. in a different classroom.

The singers stood at least six feet apart, and all wore masks. Hand sanitizer dispensers were mounted on the walls near whiteboards with blank musical staffs. A large fan whirred. Staininger asked that everyone warm up before arriving. There was little time to socialize, before or after. Some said they felt jitters, or that the gathering was “surreal,” but those paled in comparison to the joy of singing with others.

“It was good,” said Steven King, 66, of Monrovia. King, a retired mailroom employee of The Washington Post, who anchored the bass line for “Silver Bells,” “Carol of the Bells” and the motet “Übers Gebirg Maria geht.” “But I haven’t used my voice enough, so my voice fatigued quickly and my range has been restricted by not singing.”

Shawn Dean II, a full-time music student in her second year, said it felt good to harmonize with other singers again in the same space, even if it was only a small group.

Two days after the rehearsal, however, Dean became sick: a fierce headache, aches all over her body, fatigue and labored breathing. She said she alerted Staininger and went for coronavirus testing right away, but the results took longer than expected to return.

Staininger, who said privacy regulations prevented her from alerting anyone until the test results came back, said she was in agony wondering if the rehearsal would prove to be a disastrous mistake.

“I had to live with this every single day,” she said. “It has made me sick to my stomach worrying about it. The last thing I want to do is put anybody in danger.”

The singers plan to have another rehearsal Tuesday, but Staininger, after the health scare, said she was having second thoughts about whether to go through with it.