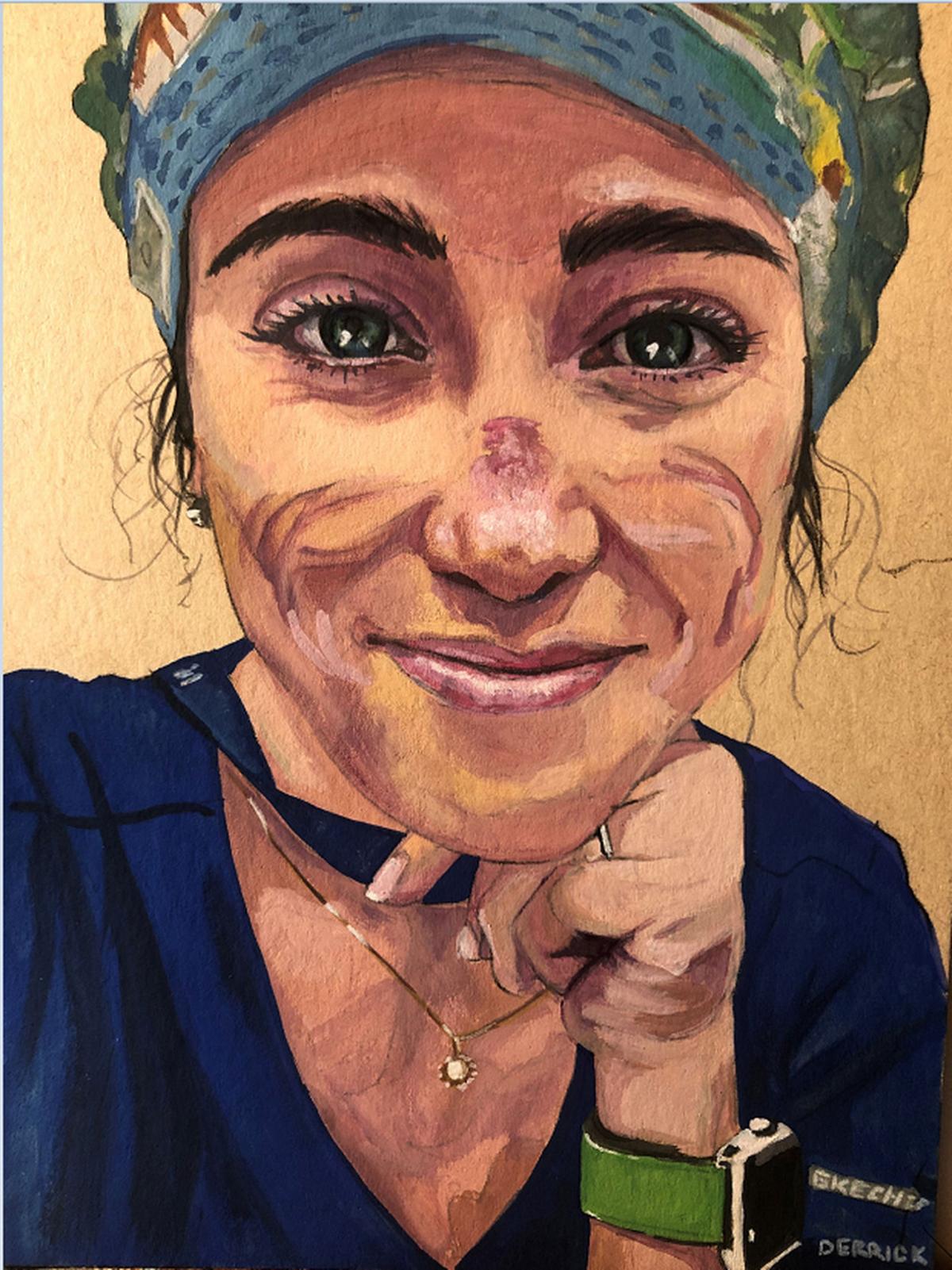 Steve Derrick’s painting of Leah White, an ICU nurse of 13 years. She moved from Houston to New York to help during the peak of the pandemic. 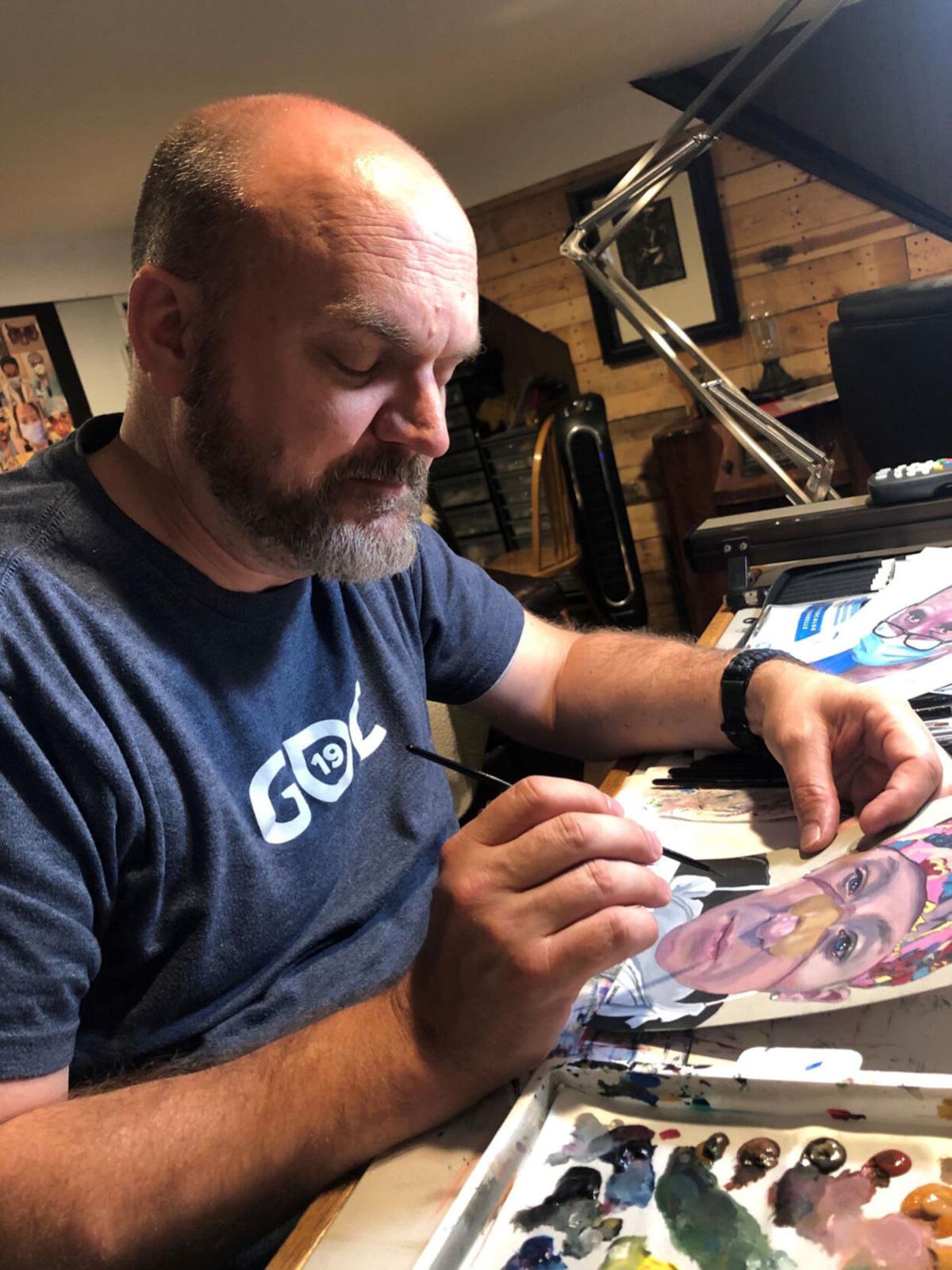 Steve Derrick at his home in Clifton Park, N.Y. He is a video game developer but spends his spare time painting portraits of health-care workers. 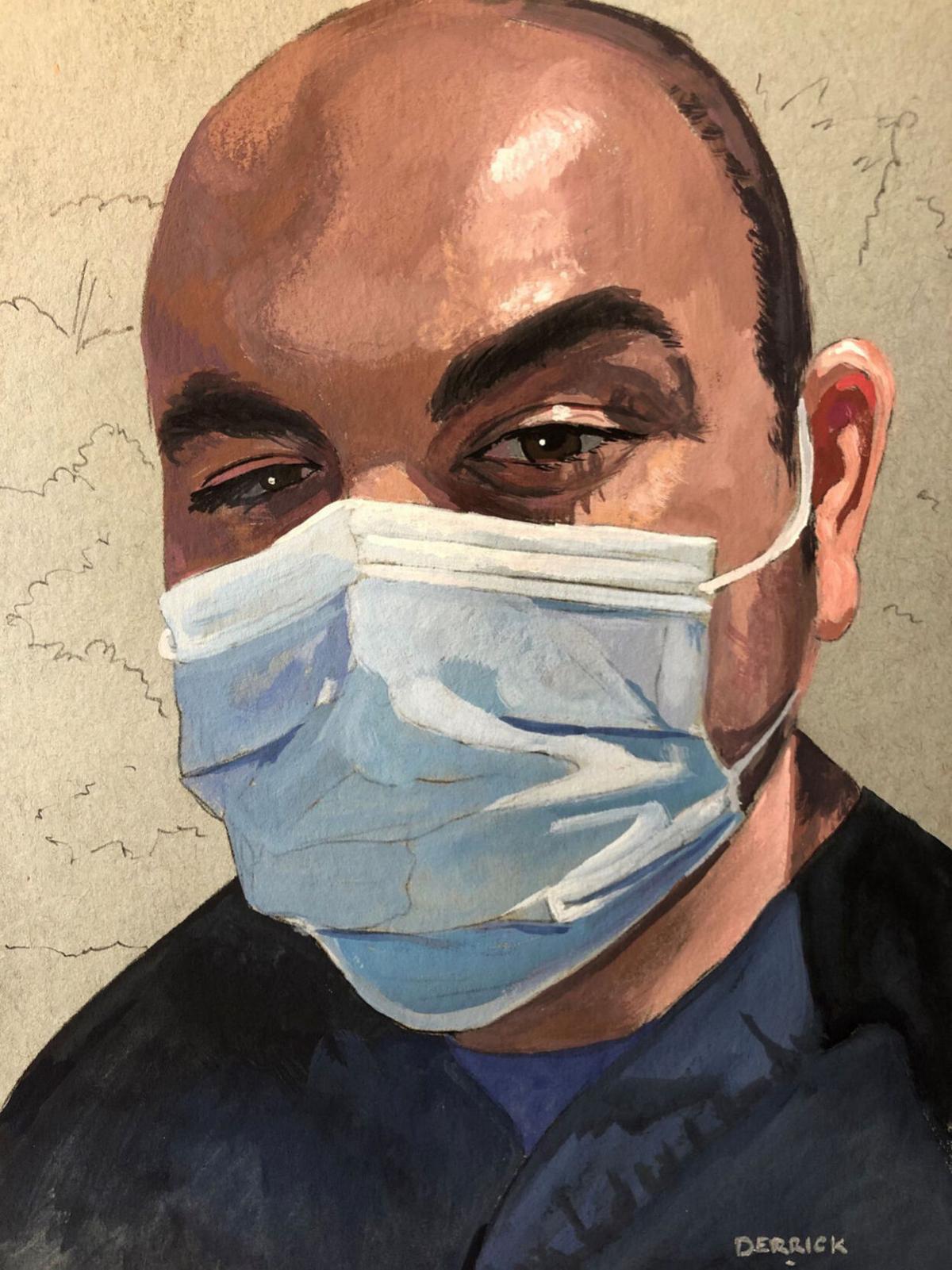 A portrait by Derrick of Numan Rashid, 43, a pulmonogist at Saratoga Hospital, in Saratoga Springs, N.Y. MUST CREDIT: Courtesy of Steve Derrick.

Steve Derrick’s painting of Leah White, an ICU nurse of 13 years. She moved from Houston to New York to help during the peak of the pandemic.

Steve Derrick at his home in Clifton Park, N.Y. He is a video game developer but spends his spare time painting portraits of health-care workers.

A portrait by Derrick of Numan Rashid, 43, a pulmonogist at Saratoga Hospital, in Saratoga Springs, N.Y. MUST CREDIT: Courtesy of Steve Derrick.

Medical workers around the world have posted photos on social media from the front lines: Mask marks etched onto their skin, dark circles under their eyes and pained expressions on their faces.

While the perils of the pandemic have taken a universal toll, health-care workers have been facing the virus head-on.

Steve Derrick was moved by the images they were posting and decided to document this critical period in history, while also thanking the front-line workers. He decided to paint them and send them the portraits to let them know that others do notice and care.

Although Derrick, 54, works full time as a video game developer, he spends his spare time at an easel, stroking colors onto a canvas until he forms the exhausted faces of front-line workers around the world — none of whom he’s met in person.

When the pandemic hit, Derrick was holed up at his home in Clifton Park, N.Y., restless and lonely. Though he continued to work remotely, he felt unmotivated and unhappy, he said, wishing there were more he could do to help heal the ailing world around him.

In early April, Derrick stumbled upon an Instagram account called @frontlinehealthheroes_ — which chronicles the experiences of health-care workers during the pandemic, depicting their harrowing tales.

“I was completely moved by health-care workers and what they’re dealing with,” Derrick said, adding that reading their stories made his own pandemic-induced isolation feel inconsequential.

After scrolling through the stories and images, Derrick settled on one — an Italian health-care worker, whose goggles and mask had left prominent bruises on her face.

He gathered his tools — palette, paintbrushes, acrylics and canvas — and started painting. The finished piece embodies the fear, fatigue and strength he saw in the stranger’s face.

After completing his first painting, Derrick immediately moved on to the second, then the third, and the fourth. His pile of pandemic portraits quickly grew.

He started directly contacting medical workers he found on social media, asking whether he could paint their portraits and mail them the finished product, free of charge.

Derrick contacted Meredith Borzotta, 42, a nurse in Philadelphia, who posted a powerful photo on Instagram on a particularly troubling day when she listened to a daughter say goodbye to her mother over the phone.

“Listening to the love in the daughter’s voice was the most beautiful and heartbreaking experience. I could not hold back the tears,” she wrote in the post. “I silently promised that I would care for this woman as if she was my own mother. I am so sorry we can’t save everyone. I am so sorry for the families left behind in the wake of this. I am so sorry that some people continue to believe that this is ‘just a flu’. I am so sorry that I can’t do more.”

Borzotta said she was humbled when Derrick contacted her and asked to re-create that moment — and delighted when she finally received the painting, which she said was clearly made with immense care.

“He included every detail,” Borzotta said. “He even got the clip on my shirt.”

“I was completely surprised when he contacted me,” said White, who has been an intensive care nurse for nearly 13 years.

At the beginning of April, she traveled from Houston to work at a hospital in Brooklyn, where cases of the novel coronavirus were mounting.

“It was like nothing I had ever seen before,” White said. “They were so understaffed, and these patients were very, very sick.”

But for White, Derrick’s gift served as a light in an otherwise devastating time in her life.

“The portrait is beautiful,” said White. “I will always keep it close to my heart.”

Eventually, the roles were reversed, and medical workers, their family members and even their patients began asking Derrick for portraits.

“I started getting requests from Italy, the U.K. and Spain,” Derrick said. “The interesting thing is, the requests followed the pandemic peaks. There were also a lot from New York, and now Texas, Arizona, Florida and Brazil.”

Numan Rashid, 43, a pulmonogist at Saratoga Hospital, in Saratoga Springs, N.Y., had heard about Derrick’s paintings through his colleagues, some of whom had received portraits.

When Derrick offered to paint Rashid, he was honored, he said.

“It was truly amazing,” Rashid said. “I gave it to my mom. It was a big deal for her to see a painting of her son.”

Rebekah Maciorowski, 26, became one of Derrick’s subjects, too.

The nurse from Denver tested positive for the novel coronavirus in early June after transferring to a New York hospital to work. Maciorowski, who developed the illness covid-19, said she still has a chronic cough and other residual symptoms of the virus.

When she received her portrait from Derrick, “there were tears,” she said. “It’s the nicest thing anyone has ever done for me.”

Once a professional artist, Derrick — a father of four — ultimately traded his passion for a more stable career many years ago, although he never gave up art. He dabbled in drawing as a hobby and typically did not show his work to others, he said.

But now, sharing his art with health-care workers has become his greatest source of joy.

Since the end of April, Derrick has painted more than 120 portraits of health-care workers, with more than 200 left on his list.

Other artists from around the world have also been using portraiture as a means of honoring essential workers.

In Britain, one artist started painting NHS [National Health Service] workers’ portraits free, and hundreds of other artists began to do the same.

“At the beginning of lockdown, I felt rather disillusioned and couldn’t see much point in doing my usual work,” said Andrew Dibben, an artist based in England, who has completed nine paintings.

A similar trend has emerged in Canada.

“A pair of local artists started #FrontlineFacesNL, and I thought what a great way to say thank you to these people,” said Heather Coughlan, an artist in eastern Canada, who contributed to the initiative.

While Derrick’s goal is to honor health-care workers, his paintings have also brought perspective to others beyond the medical community, as his work is being showcased virtually at a gallery in Albany, N.Y.

For Derrick, forming a bond with front-line workers and understanding their experiences has been the most rewarding aspect of his portrait project.

“Their stories are just incredible,” he said. “Hearing them is what has kept me going.”