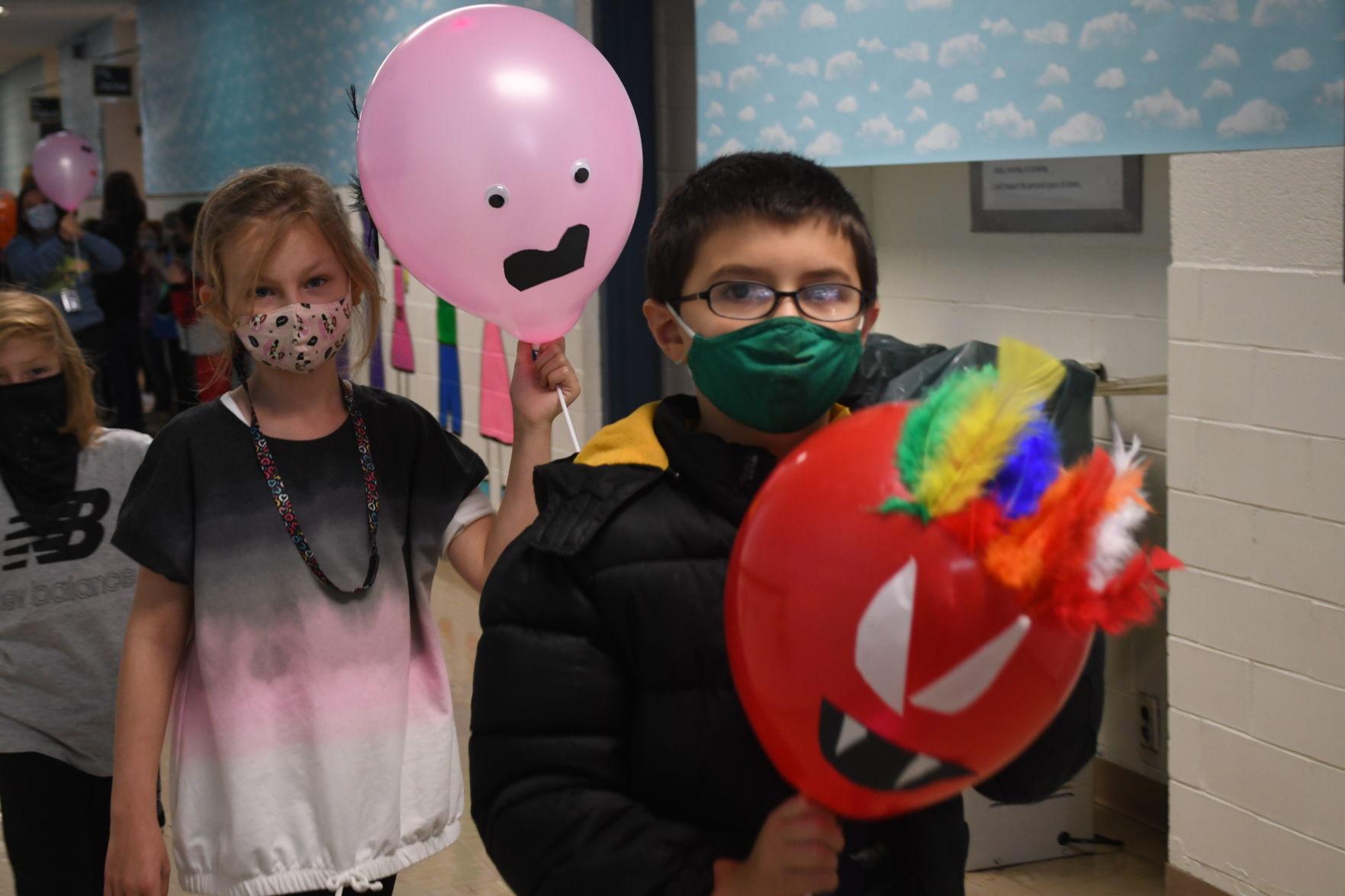 Third-graders at West Broadway Elementary decorated balloons the last of school before Thanksgiving break and showed them off to the rest of the school. Addison Arnold, left, and Davian Harralson, show off their decorated balloons.

How will you be spending the biggest shopping day of the year?

For millions of people around the country, Black Friday is the time to do some Christmas shopping, even before the last of Thanksgiving leftovers are gone. If you fall into this category and want to kick off the unofficial start to the bustling holiday shopping season but want to avoid some of the larger lines, shopping small may be the way to go.

Venue 42408 in Dawson Springs, normally a venue that is available for folks looking to host parties, will be posting a special Pop-Up Shoppe event beginning as early as Thanksgiving night at 8 p.m., and continuing all weekend long from noon to 9 p.m.

Whether you are looking for a custom hand-crafted gift or simply window shopping, organizers hope there is something for everyone at this holiday event.

Some of the vendors that you can expect to see:

Mark Wayne Adams Books: where you can browse many award-winning books from bedtime to 8th grade level. Author/Illustrator Adams will be available to autograph books to readers on your gift list.

Artistry by Bella Company: this is an exclusive clothing line that began with a pair of jeans that didn’t fit. Shoppers can expect to find unique clothing, ocean inspired attire, or you can request her to create something special that you will love.

Quilts by Miss Mary: Miss Mary is a former librarian who turned to her love of quilting. She has an array of handcrafted items from quilt tops to completed quilts and more.

The pop-up event will take place at 103 East Railroad Avenue in Dawson Springs.

Members of the Professional Women’s Club (from left) Amie Thomas, Cheryl Hamby, and Ashlee Mawdsley presented the club’s annual Spirit Award to Christy and Jeff Winfrey (at right) on Sunday during the City’s holiday lighting event in Veteran’s Memorial Park.

Miss Dawson Springs 2021, Aly McCord, signals the start of the holiday season in Dawson Springs by calling for the illumination of the city’s Christmas decorations.

Photos by Cassie Ipock/for The Messenger Peggy Ferguson (far right) was named Citizen of the Year by the City of Dawson Springs at its annual holiday lighting ceremony in Veterans Memorial Park on Sunday night. Making the presentation on behalf of the city (from left) were Dianne and Philip Back.

It’s beginning to look a lot like Christmas in Dawson Springs.

Just after dark on Sunday evening, the City of Dawson Springs hosted its annual Christmas lighting ceremony downtown in the square. Miss Dawson Springs 2021 Aly McCord led the crowd in a countdown to the illumination of the city’s holiday decor, and special recognitions were conducted by the Professional Women’s Club and the City.

Ashlee Mawdsley, on behalf of the Professional Women’s Club, presented Jeff and Christy Winfrey with the club’s yearly ‘Spirit Award,’ ”for their hard work and dedication to the community of Dawson Springs,” said Mawdsley.

The Winfreys “do so much for our community--from preaching the gospel at their home church or at the local nursing home, to going to the Hopkins County Food Bank to give food and deliver it to families in need,” Mawdsley said as she awarded the couple a plaque in recognition of their efforts. “They also shop and work for the local DAPS food bank and help load vehicles at the square when the food trucks come to town.”

“They volunteer their time and services to the Family Resource and Youth Services Center in the Dawson Springs school system and the Shop with a Cop program,” Mawdsley continued. “Whatever the need, they are always eager to help--they are truly what a community service family is made of.”

Philip and Dianne Back proclaimed that Peggy Ferguson was named ‘Citizen of the Year’ for 2021 by the City of Dawson Springs. Ferguson “grew up in Dawson Springs and graduated from Dawson Springs High School with honors in 1972,” said Mrs. Back. “While in high school, she worked at Pennyrile State Park, and this is where her friendship began with Philip and I.”

A graduate of Western Kentucky University, Virginia Tech, and the Air War College, Ferguson resided in Dawson Springs until 1981, when she accepted a position with the federal government, working in Louisville, Washington, D.C., and St. Louis.

“In 2006, she retired and returned to live in the home built by her late grandparents in the Charleston area,” Mrs. Back said. “Since retiring, she has become active in the following Dawson Springs organizations: Museum Board member and treasurer; Historic Preservation Society, chairperson; West Hopkins Industries, member; Friends of Pennyrile, member; YW member and president; Garden Club member; and Methodist Church treasurer.”

At the conclusion of the ceremony, Mayor Chris Smiley reminded the crowd that the Dawson Springs Christmas Parade will be held on Sunday, Dec. 5 at 5 p.m.

The deadline to register for the parade is Thursday, Dec. 2 at 4 p.m.

Interested parties can submit applications via the drive-thru of the annex building until the deadline.

The theme of the parade is ‘A Season of Giving.’ Volunteers with DAPS, or Dawson Area Personal Services, will be walking alongside their float accepting donations of food items by those in attendance at the parade, according to member Rusty Akers.

“All in the spirit of giving, our float will be a big, decorated basket,” he said. “This is a great way to replenish shelves at the food bank.”

These mini bamboo cutting boards are perfect for engraving and making a personalized gift this holiday season.

Want to give a little love with a handmade present but don’t know where to start? The Kentucky Movers & Makers are offering unique classes during the holiday season for people interested in crafting and making personalized gifts for family and friends. In addition to their usual offerings, these special classes are in high demand and many spots have already been reserved.

On December 10, from 9 a.m. to 3 p.m., Movers & Makers will be welcoming people to reserve a one hour block of time to come in individually and personalize/engrave a mini wooden cutting board. The cost is $25 and each booking will go home with one customized cutting board. There are multiple different styles and fonts that people can choose from for monogramming or customizing. This creates a unique way to make a Christmas gift, and the makers will be hands-on in creating it.

Additional available classes will be posted on the Movers & Makers website, kentuckymoversandmakers.com, be sure to check back often as spaces have been filling up.

Cameron Edwards, who has been active in several areas of civic engagement in Webster and Hopkins counties, was recently named to a prestigious program that addresses a variety of issues affecting communities across the South.

Edwards is one of 33 people from a variety of backgrounds and professions chosen for the 2022 Delta Leadership Institute organized annually by the Delta Regional Authority.

The Webster County resident is Senior Pastor of Webb Memorial and Slaughters First United Methodist churches. He is also Chairman of the Hopkins County Regional Chamber Of Commerce Board of Directors.

The DRA is a federal-state partnership created in 2000 by the U.S. Congress to promote economic development in the lower Mississippi River Delta and Alabama Black Belt regions. It covers 252 counties and parishes over eight states, including Kentucky.

The institute is a nine-month executive leadership program that brings together leaders from the public, private, and nonprofit sectors to focus on the needs of communities in the DRA’s target areas. The intent is to gather participants to discuss the necessities for growth of business and job creation. The goal is to improve the program graduates’ knowledge of how to overcome a variety of challenges to help economic development.

Areas of focus in the multiple sessions include transportation, policy and government, entrepreneurship, infrastructure, culture and tourism, and regionalism, among others. The sessions will be held in New Orleans; Memphis; Washington DC; Carbondale, IL; Selma, AL; and Cleveland, MS.

Edwards is one of three named to the 2022 class from Kentucky. Jason Lemle of Mayfield and Missy Vanderpool of Henderson are both heads of their respective counties’ economic development organizations.

Since 2005, the DLI has hosted more than 600 community leaders in the Delta region.

Click and hold your mouse button on the page to select the area you wish to save or print. You can click and drag the clipping box to move it or click and drag in the bottom right corner to resize it. When you're happy with your selection, click the checkmark icon next to the clipping area to continue.