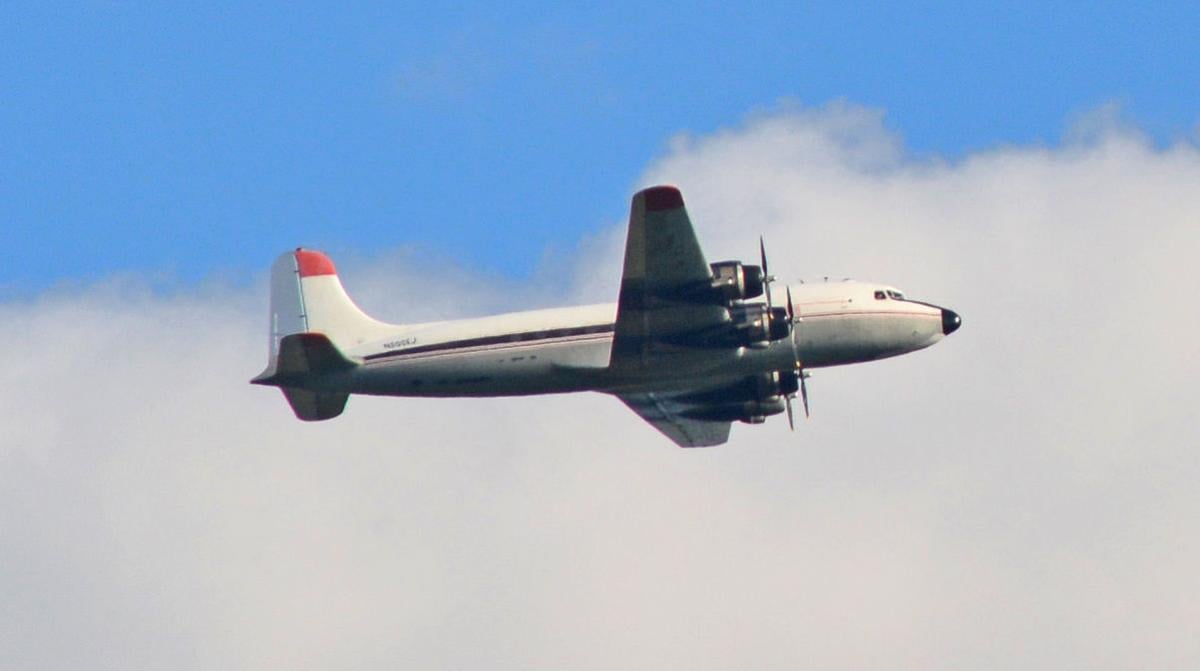 A historic Douglas C-54D Skymaster passes over the Madisonville City Park earlier this month after refueling at the Madisonville Regional Airport in Anton. The plane was one of 330 C-54s that flew in the Berlin Airlift in 1948 and 1949. 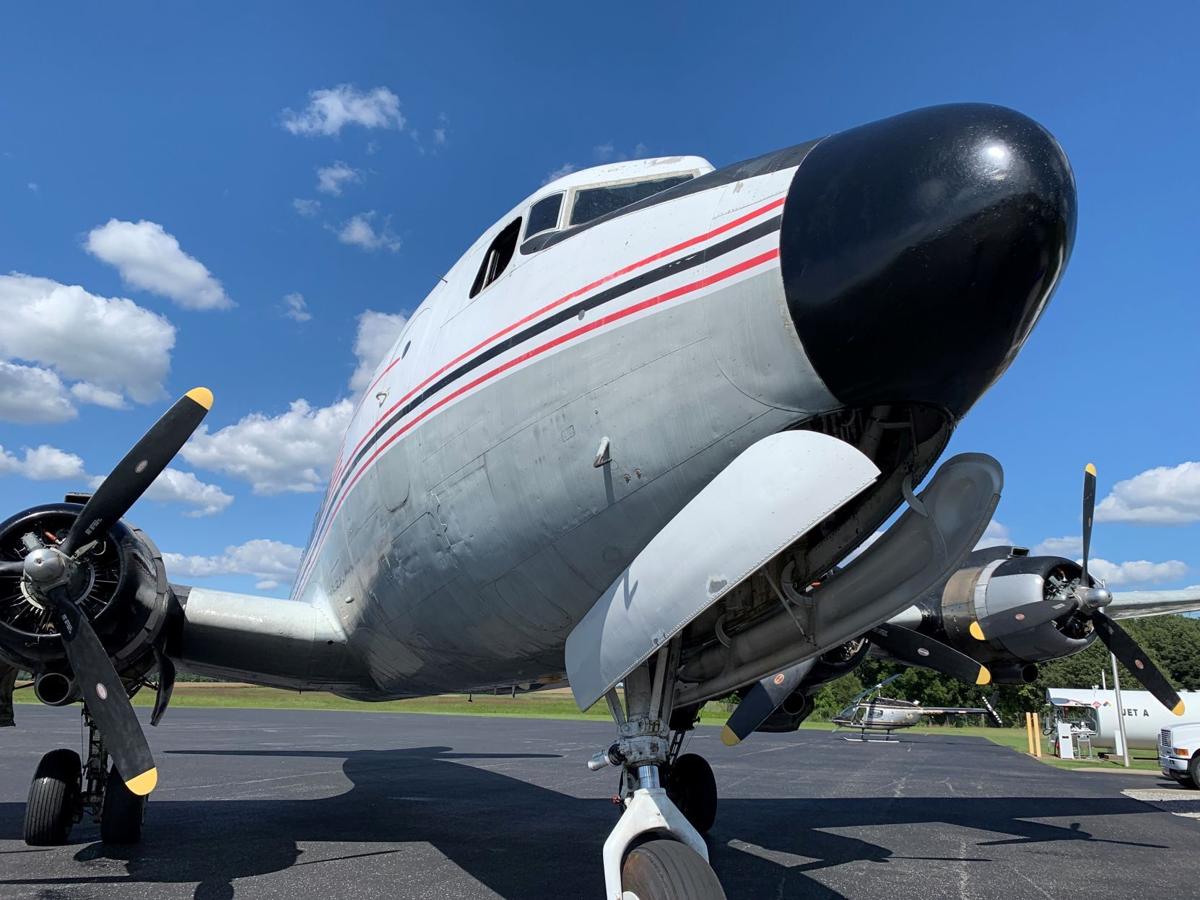 Once painted, this Douglas C-54 will enter service as a flying museum, helping to spread the memory of the historic Berlin Airlift missions of the 1940s. 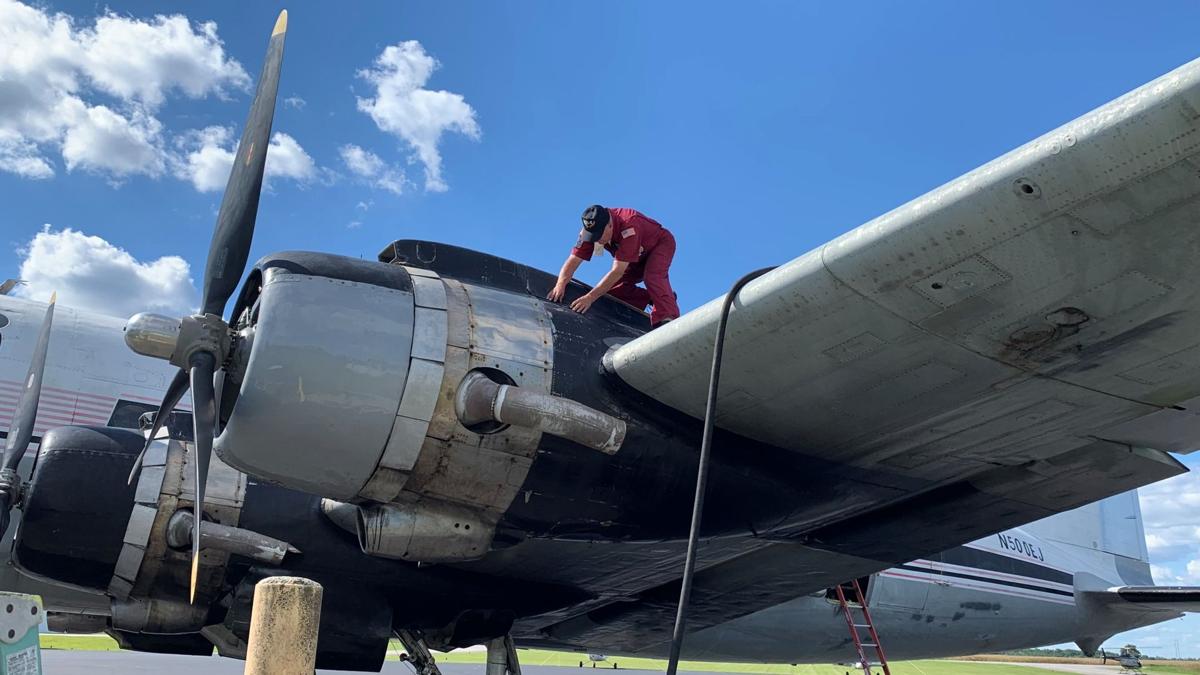 Tim Chopp, founder and president of the Berlin Airlift Historical Foundation, checks out his C-54D after landing at the Madisonville Regional Airport for fuel. The plane was bound of Mena, Arkansas to be painted to carry the same 48th Troop Carrier Squadron paint scheme it carried during the Berlin Airlfit.

A historic Douglas C-54D Skymaster passes over the Madisonville City Park earlier this month after refueling at the Madisonville Regional Airport in Anton. The plane was one of 330 C-54s that flew in the Berlin Airlift in 1948 and 1949.

Once painted, this Douglas C-54 will enter service as a flying museum, helping to spread the memory of the historic Berlin Airlift missions of the 1940s.

Tim Chopp, founder and president of the Berlin Airlift Historical Foundation, checks out his C-54D after landing at the Madisonville Regional Airport for fuel. The plane was bound of Mena, Arkansas to be painted to carry the same 48th Troop Carrier Squadron paint scheme it carried during the Berlin Airlfit.

Early one evening in mid-September, the sky over Madisonville came to life with a unique sound that drew looks from anyone that was outside at the time.

Onlookers likely witnessed an unusually large airplane taking off, but had no idea that this particular aircraft played a key part in struggles against the Soviet Union during the early days of the Cold War.

That noise was the sound of four Pratt & Whitney R-2000 Twin Wasp radial engine roaring in unison as they lifted a Douglas C-54D Skymaster into the air. It was a sound that was heard many times over West Berlin in 1948 and 1949.

This particular plane belongs to the Berlin Airlift Historical Foundation — a New Jersey-based organization dedicated to keeping the memory of one of the earliest struggles of the Cold War alive.

As World War II came to a close, the Allies sat down and decided the future of Germany. The USSR took control of the eastern half of the country, while the US, Britain and France took over equal sections of the western half. The two sides also split the German capital city, located 100 miles deep inside Soviet Controlled East Germany, right down the middle.

By the end of the 1940s, the US, Britian and France began working to reunite their sections of Germany, including West Berlin, into one country, even introducing a unified currency, the Deutsche Mark.

The Soviet government shut down all roads into West Berlin and blocked all railroad and river traffic attempting to reach the isolated city. With 100 miles of East German real estate between the city and the rest of West German, West Berlin was effectively cut off from all food and supplies.

Unwilling to use military force to break the blockade for fear of turning the Cold War into a shooting war, the allies arrived on a decision to use cargo planes to deliver food, fuel and other goods to the people who lived in the western part of the city.

Code named “Operation VITTLES” by the military, the Berlin Airlift was born. For more than a year, Douglas C-54 Skymasters and Boeing C-97 Stratofreighters kept the people of West Berlin fed and alive.

In 1988, 39 years after the last Airlift flight, New Jersey resident Tim Chopp purchased one of the 330 C-54s that flew in the historic operation. He had the plane painted with the original 48th Troop Carrier Squadron paint scheme that it had carried during the Airlift, and began filling the interior of the craft with artifacts, displays and information, effectively creating a flying museum.

Hear Zelensky claim that Russia is plotting coup against him

From that one plane, the Berlin Airlift Historical Foundation was created. The organization now owns several C-54s and a C-97 which are flown to locations all over the globe to memorialize the Airlift missions and what they meant to the people of West Berlin.

The organization’s original C-54 met an untimely end last year on April 13, 2020 when it was hit by a tornado in Walterboro, SC. According to WCSC-TV, more than 20 plans were destroyed and dozens more were damaged that day when the Lowcountry Regional Airport took a direct hit from a storm.

“They just bought this plane,” said Emily Herron, C.M., Manager of the Madisonville Regional Airport. “It was making its way from New Jersey to Arkansas for a paint job, and stopped here to refuel.”

Herron and the other crew on the ground took advantage of the plane’s presence to learn more about, a service that Tim Chopp was happy to provide.

“I very much enjoyed our visit to the Madisonville Airport to take on fuel for the flight to Mena,” said Chopp. “I really wanted to stop in once again because of the great reception we had by the good folks at the airport, but it appears now we will not be returning to the east coast via Madisonville but will be taking a route about 70 miles south.”

Chopp himself served as pilot of the plane for the voyage, which was destined for Crider Aircraft Painting, Inc. in Mena, Arkansas. Once painting is complete, the new plane will join the organization’s fleet of flying museums.

Although the C-54D will not be making a return trip to Madisonville as originally planned, the time it spent in Hopkins County will be fondly remembered by the locals who had a chance to see it.

“It was a really neat airplane with a cool history,” said Herron.

The Berlin Airlift Historical Foundation is a 501©(3) charity dedicated to honor those who flew in the airlift missions, including the 101 fatalities, 31 of which were Americans, that occurred during 1948 and 1949.

They regularly appear in air shows around the world.