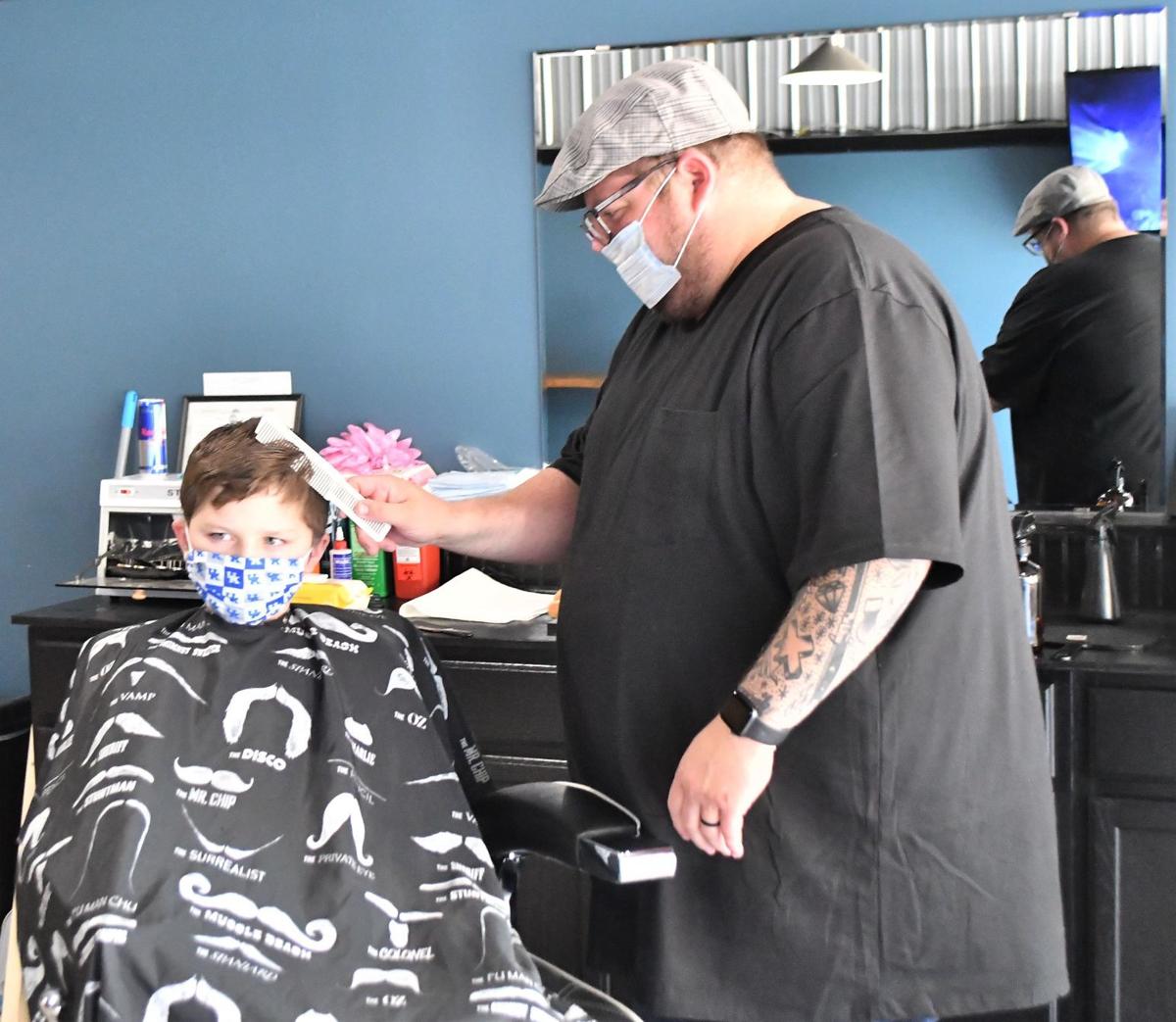 James Carr Trice works on a young customer Monday at the opening of his new barbershop in downtown Madisonville. Trice had been delivering food since losing his independent contractor job in March to the coronavirus. 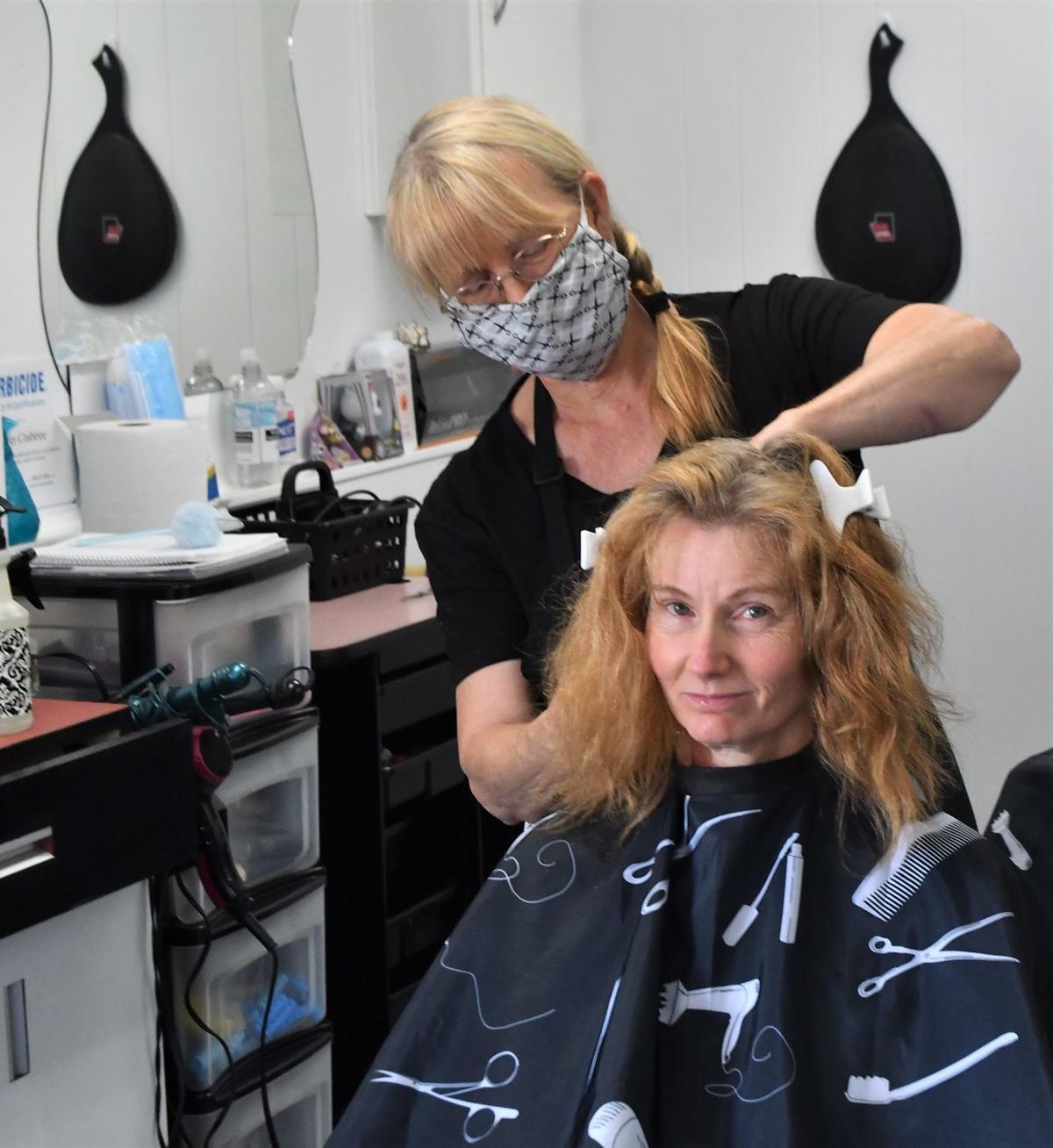 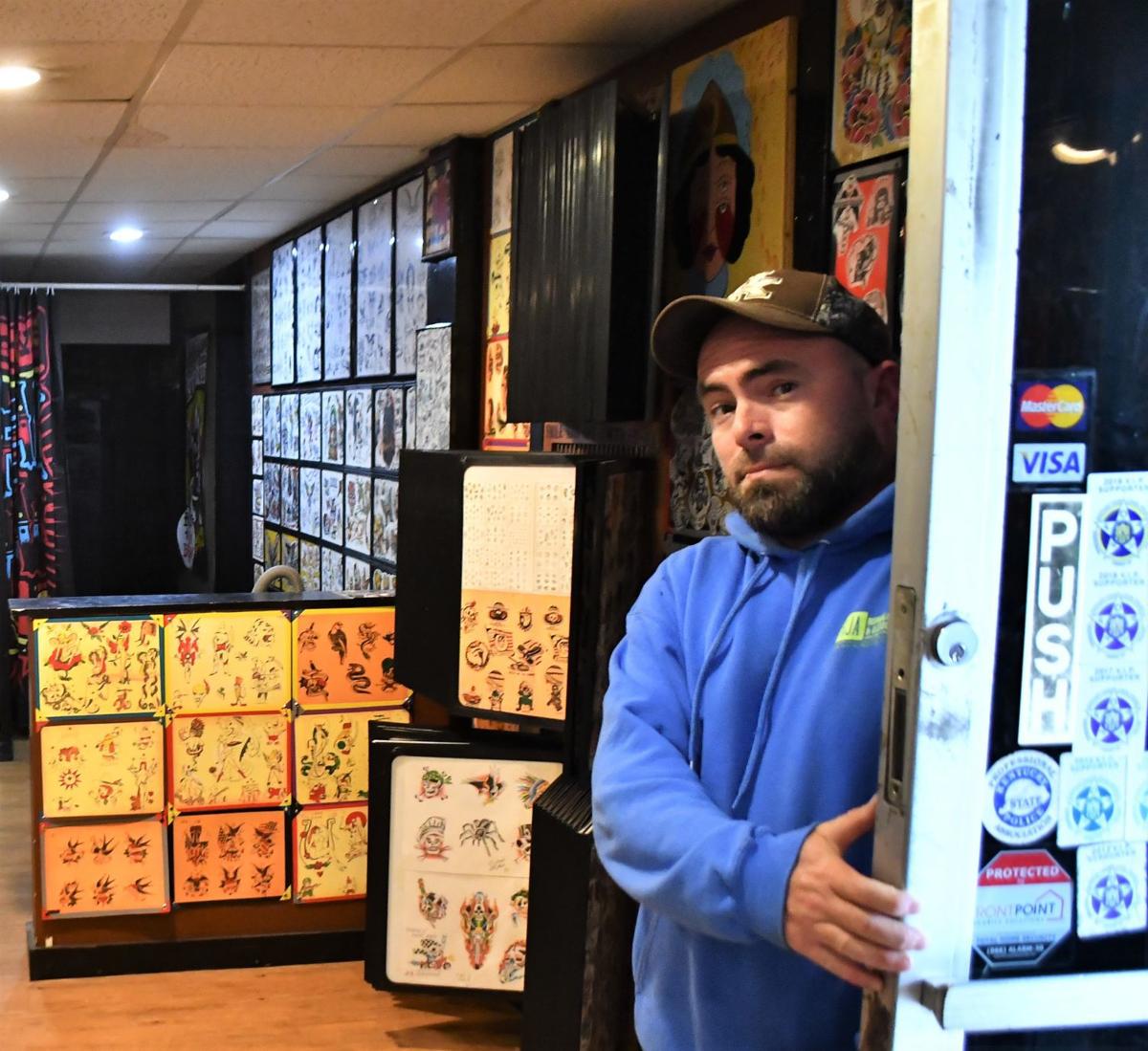 Jack Hinton prepared for weeks for the Madisonville tattoo parlor where he works to reopen. It happened Monday with new signage “American-Made Tattoos.” But customers are limited under coronavirus rules.

James Carr Trice works on a young customer Monday at the opening of his new barbershop in downtown Madisonville. Trice had been delivering food since losing his independent contractor job in March to the coronavirus.

Jack Hinton prepared for weeks for the Madisonville tattoo parlor where he works to reopen. It happened Monday with new signage “American-Made Tattoos.” But customers are limited under coronavirus rules.

A new tradition may have begun across Hopkins County Monday — the great Memorial Day haircut.

But when asked if he and his 5-year-old brother Hudson missed visiting the barber for 10 weeks, they shook their heads no. Boys can be like that. Yet their dad knew it was time — perhaps well past time.

Barbershops and salons that might normally be closed for a Monday holiday, reopened for the first time in more than two months. It was their first day of business since Gov. Andy Beshear ordered them c;osed as a coronavirus precaution Wednesday, March 18.

But for James Carr Trice, Monday was a grand opening instead of a reopening. After years of work at another local barbershop, he stepped out on his own and launched the Mug and Brush downtown. It’s in a building where style icons Elvis Presley and Marilyn Monroe are displayed outside.

“It just kinda happened,” Trice said of the timing.

The last time The Messenger met Trice in late March, he was an unemployed independent contractor. Trice delivered groceries and restaurant items to feed his family of five. But now, his new business is off to a fast start.

Booking is a key word in the reopening process. Beshear’s “Healthy at Work” guidelines for barbers and salon owners say they must “provide service by appointment only,” with no waiting areas.

“I tried to go when they first shut down,” Twilla Phelps said from the stylist’s chair. But she missed the deadline, which meant she could have done the home “quarantine cut” like some celebrities have displayed on social media.

“I thought about it,” Phelps said. Instead, she waited for owner Denise Scott and employee Jennifer Crabtree to return Monday. Crabtree called it an awesome day, and quite a change from the last couple of months.

“I played games with the kids, and did what we could,” Crabtree said. “We couldn’t do anything or go anywhere.”

Hinton said the staff only can work on three customers at a time. The Governor’s guidelines have a limit of “33% of the occupational capacity of the facility.”

Some protesters have become so annoyed with Beshear’s rules and cautious reopening plan that they hanged the Governor in effigy Sunday in Frankfort. Despite some rough recent weeks, Trice wouldn’t have gone that far.

“That was a bit out of whack,” Trice said.

No new statistics on the coronavirus were released Monday, at either the local or state level. Hopkins County stands at 219 confirmed cases, with 160 recovered patients and 28 deaths.

In other new developments related to COVID-19:

• state statistics showed Hopkins County is third in deaths from the virus in Kentucky. Only Jefferson and Kenton counties have more.

• a sign outside Gordmans said the Parkway Plaza Mall store will reopen Thursday. Parent company Stage Stores has not announced any change in its plans to “wind down” operations at all locations, after filing for bankruptcy protection.

• Earlington Mayor Phil Hunt called a special city council meeting for Thursday at 3 p.m. It will take place at City Park instead of City Hall as a virus precaution. Hunt is concerned about the small size of the City Hall meeting room and the older age of several members.

• the Hopkins County Regional Chamber of Commerce scheduled its annual golf classic for Friday, Oct. 2. Last year it was held in late June.