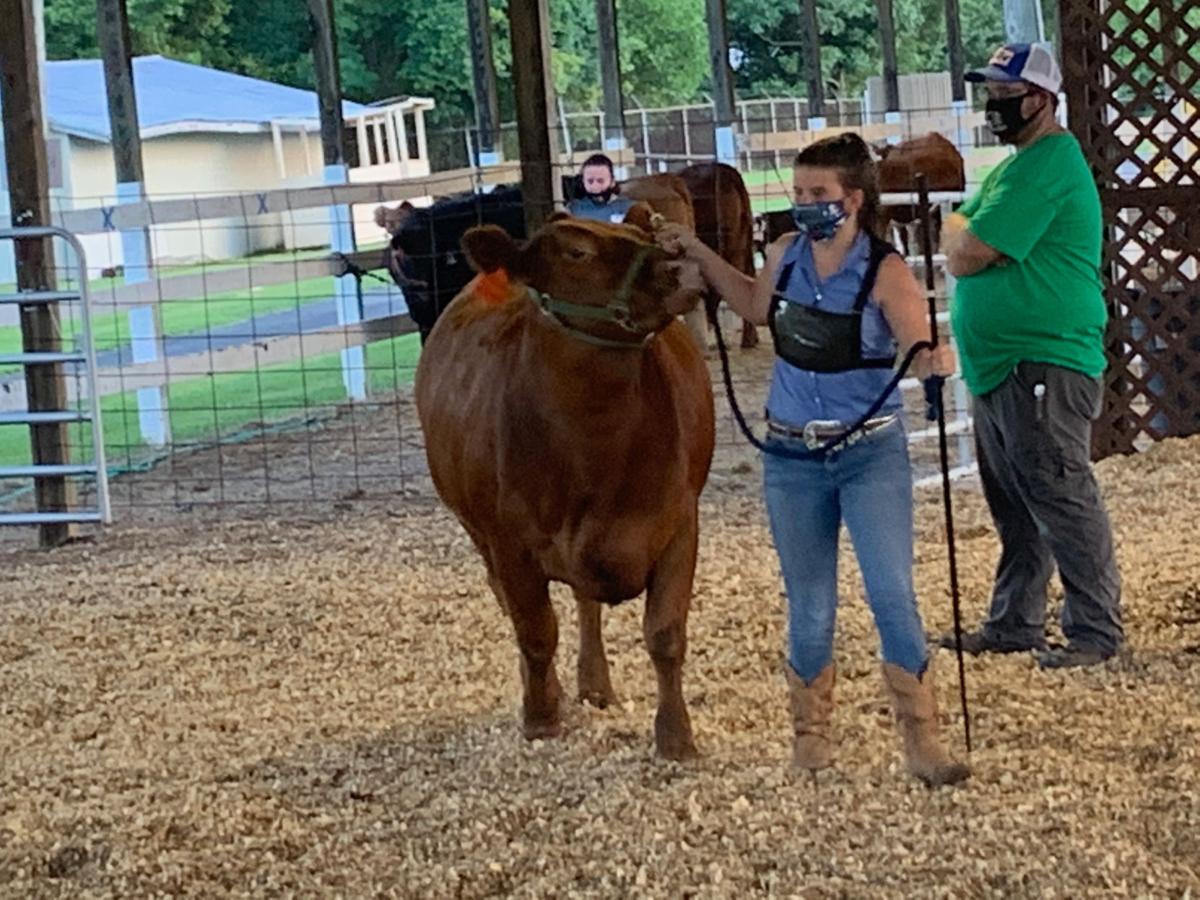 Madisonville North Hopkins High School FFA member Destiny Holmes walked her animal into the showing ring Thursday night so judges could get a good view of the cattle’s muscling and structural confirmation. 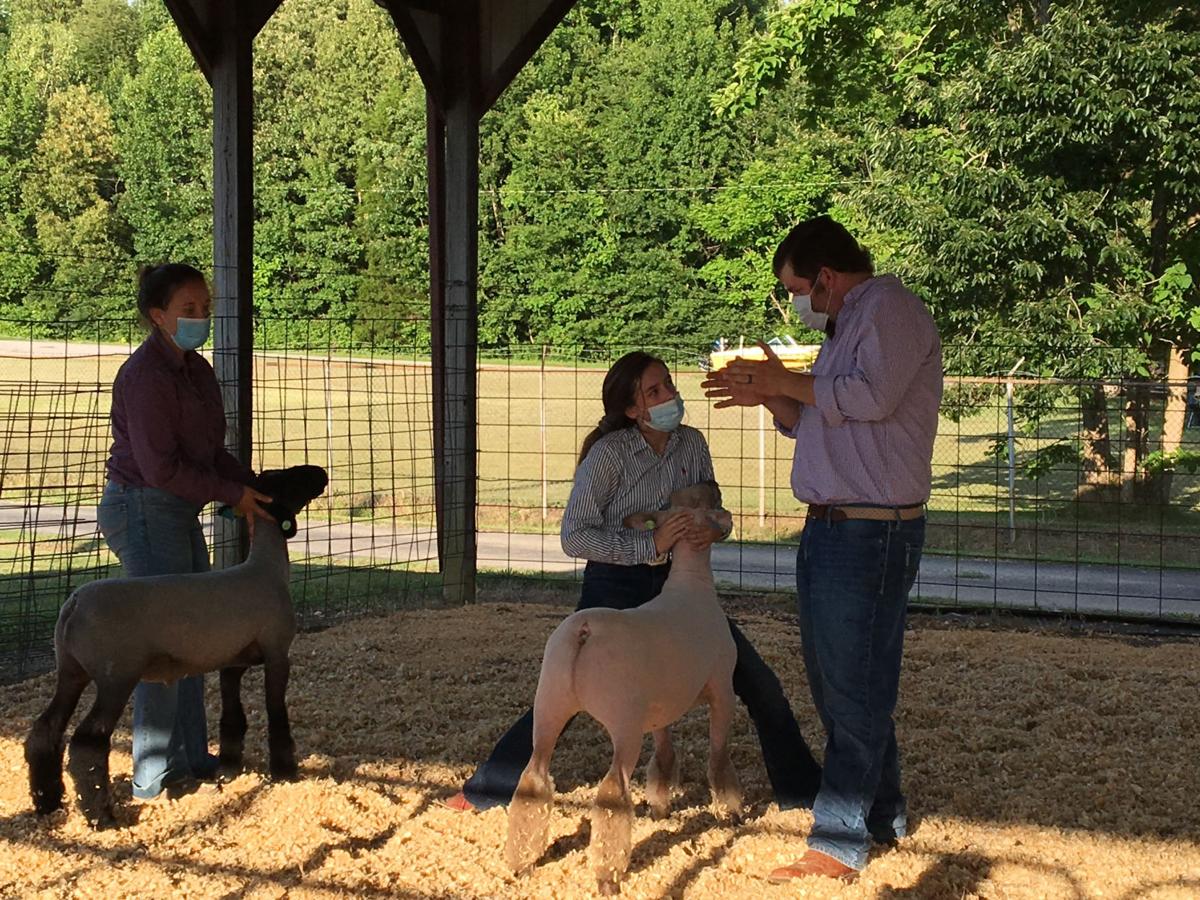 At the Hopkins County Fair’s sheep showing, contest judge Corey Wallace, right, talked with Elly Hampton, center, about how to improve her lamb for the future.

Madisonville North Hopkins High School FFA member Destiny Holmes walked her animal into the showing ring Thursday night so judges could get a good view of the cattle’s muscling and structural confirmation.

At the Hopkins County Fair’s sheep showing, contest judge Corey Wallace, right, talked with Elly Hampton, center, about how to improve her lamb for the future.

There are no sounds of carnival rides nor smell of funnel cakes in the air this summer in Madisonville.

With COVID-19 restrictions set in place, the Hopkins County Fair went back to its roots in 2020 — agriculture.

Madisonville North Hopkins High School agriculture teacher Brian Welch said people want a sense of normalcy. He also noted that both livestock exhibits and the ag portions were what created the fair as we know it today.

“As we’re trying to rebuild, moving forward, I think trying to find those traditions were really important,” Welch said. “You’ve got a lot of people invested in this — in the agriculture in showing and the theory behind it. It’s a fundamental capstone to a lot of hard work and ethics that go into developing the students.”

Fair board vice president Byron Pruitt said although it is a different year for the fair, which was closed to the public except for exhibitors and their families, they had a decent turnout.

“We’ve had decent numbers at our shows. They’re not what they normally are, but we’ve had quality animals,” he said. “We’ve had good displays in our home and garden building from the 4H and (Future Farmers of America). But given the year, I’ve been very satisfied with the participation.”

Throughout the fair, people had to wear facemasks at all times. Pruitt said no one complained.

Pruitt said the fair board was thrilled to have a place for their exhibitors.

“We’re just so happy to be able to do this for the exhibitors. Madisonville Rural King, Land O’ Frost, Rep. Melinda Prunty — and all those who have financially supported the fair this year to provide the premiums for the exhibitors and also for the fair board, the community volunteers, our FFA teachers, advisors and our local extension staff for their support,” Pruitt said. “Without all the volunteers coming and supporting it and helping us put it on, we couldn’t get it done. It’s been very supported, and we appreciate the community and the businesses willing to be apart of this year’s exhibits and the fair.”

Hopkins County extension agent Katie Mills said they had 17 kids from 4H and FFA enter over 220 projects. They had participation from local students and ones from other counties — with one exhibitor coming from Tennessee.

“Kids have enjoyed it. They’re excited to finally get out and show their projects that they’ve been working on all year long,” she said. “A lot of them spend quite a bit of money on their animals to be able to upkeep them, feed them and take care of them. They were excited to be able to stick it out and show them, even if they had to wear a mask the entire time with almost 100-degree weather.”

Welch said the students that competed this week are the ones who get up before they eat their own breakfast to take care of their animals.

“It’s the hard work and dedication that these people are putting into it, and therefore, I think there’s a little bit more of that humbleness that comes along with it that makes it easy to support them,” he said. “It’s not like an overnight project. This is years or months in the making. The big takeaway for us is the amount of support there has been from the community to make this happen.”