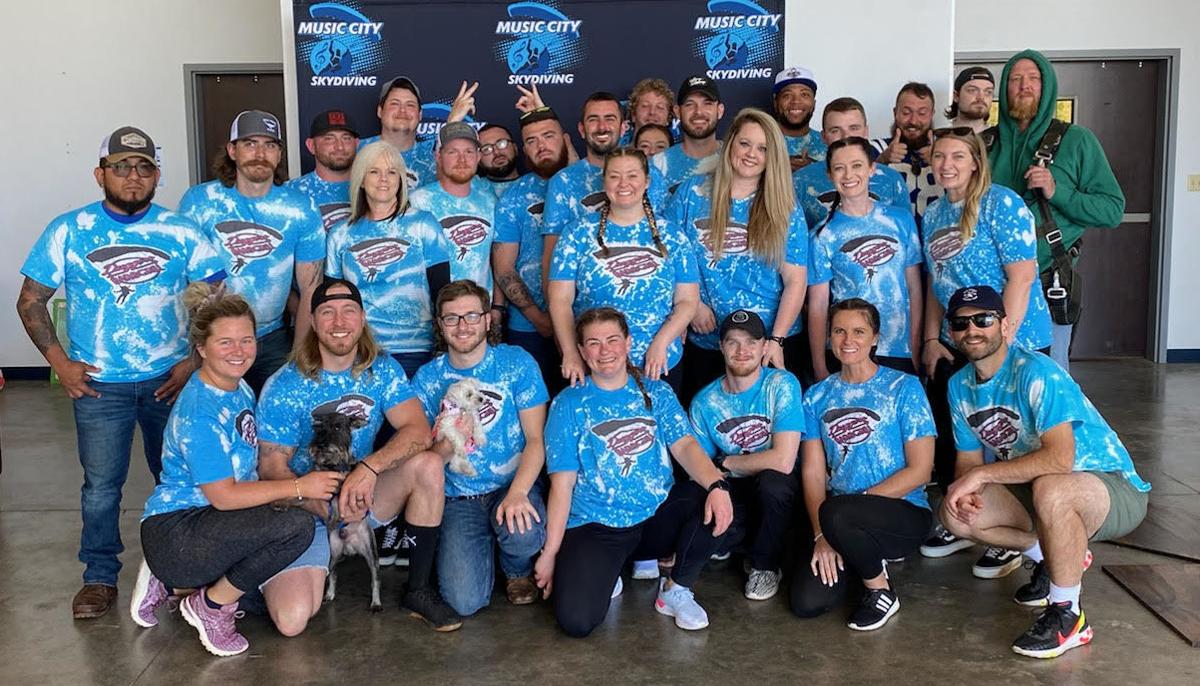 Inspired by a quote from Will Smith, “God put the best things in life on the other side of fear,” Cody Dugger, owner of Duggers Bar and Grill, took around 40 people skydiving last weekend.

The trip started by helping a friend, Noah Davis, who is a regular at the bar and has always wanted to go skydiving.

“I never had a chance to talk to anybody about it because everyone I spoke to was like no way,” said Davis.

Dugger and his girlfriend, Kaitlyn Jones, who is also the general manager at the bar, came back from a trip to Hawaii last month where Jones skydived for the first time and Davis wanted to know about it. Dugger and Jones offered to go with him for his first time.

“I asked them some questions and then all of a sudden, I have a bunch of my buddies jumping out of a plane,” said Davis.

According to Dugger, several of the employees and regulars at the bar heard about the skydiving trip and decided they wanted to go to.

Jones booked the trip with Music City Skydiving in Waverly, Tennessee and organized it for everyone who wanted to participate. She said they were originally supposed to jump on April 11, but inclement weather forced the trip to be postponed.

She said for the first trip, they had around 20 people interested in going, and by the time April 25 came, close to 40 people were going.

“We just kept asking everyone if they wanted to go and got more people on board,” said Jones.

The skydiving company only had smaller planes because their larger one was stuck in another state, so only two people could jump at a time, she said. It turned into an all-day event, with 40 people eventually jumping.

“We were there just hanging out with everyone,” said Jones. “It was a different atmosphere than at the bar.”

Davis said jumping was one of the best moments of his life, and he wants to skydive again.

“I was one of the fortunate people,” he said. “I was on the third plane, so I didn’t have to wait all day.”

On the ride up to 14,000 feet, Davis asked his tandem jumper, Kevin McLemare, what his biggest fear was and McLemare answered, “dying strapped to a 230-pound man.” Davis said that was the best answer he could have heard right then since he is scared of heights. He said he wanted to jump because he wanted to face his biggest fear.

“If I can conquer my greatest fear and do it to an extreme of that level, then I feel like there isn’t anything that could stop me,” said Davis.

Dugger said several people in the group had not skydived before and there were a few who hadn’t even previously been on a plane.

“The first time they did, they jumped out of it,” he said.

Out of all of his jumps, Dugger said he has never seen anybody hate the experience once they have jumped.

He said he wants to make this an annual or biannual event.

Jones said she feels like everyone should go skydiving at least once in their lifetime.

“It is the most amazing feeling in the world,” she said.