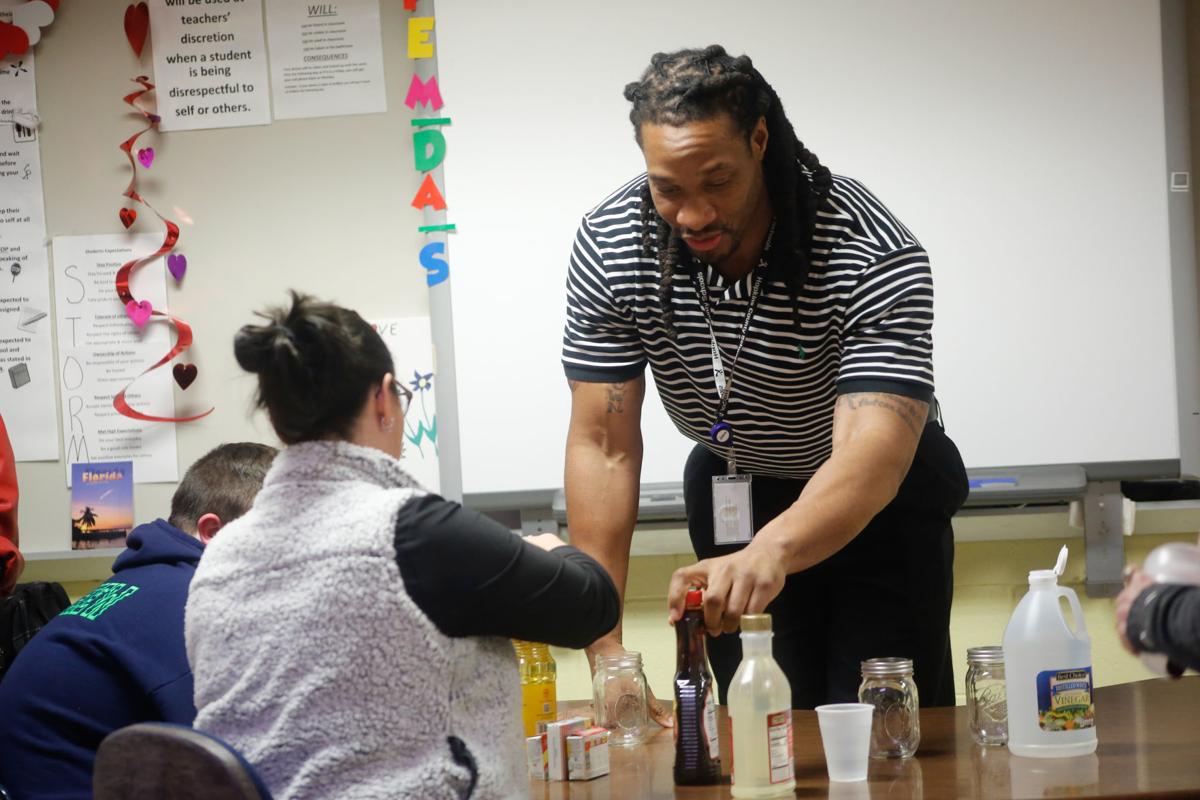 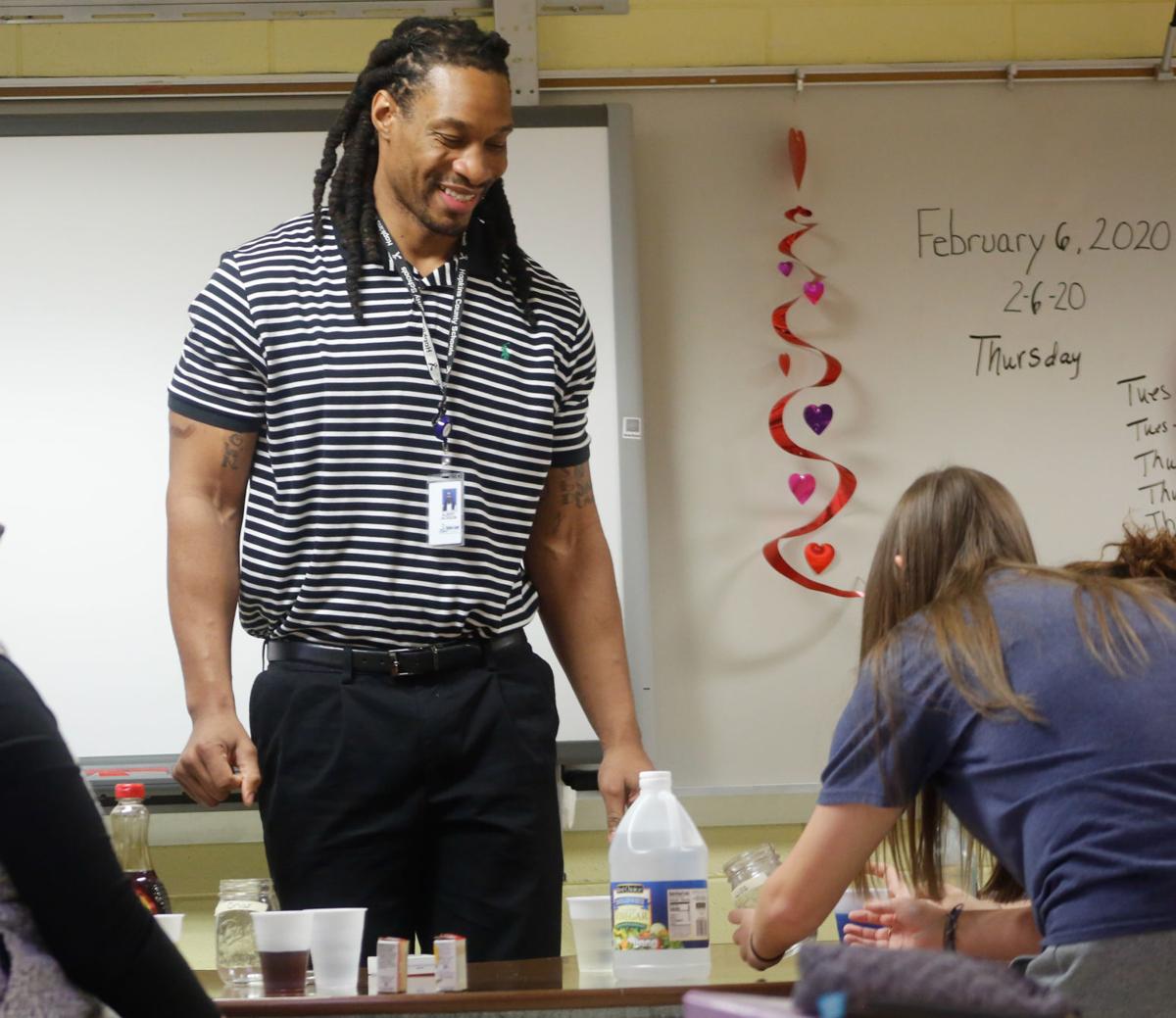 Albert Jackson smiles as his students work on an experiment where they combine liquids and identify the reaction.

Albert Jackson smiles as his students work on an experiment where they combine liquids and identify the reaction.

At 6 feet, 9 inches tall, Albert Jackson is a giant to most, but it’s the work he’s doing with kids that’s making the biggest impact in Hopkins County.

In his classroom, Jackson teaches his students that they can do whatever they set their minds to do. For years, Jackson has honed his knowledge and abilities to reach his peak capacities and now ready to pass those traits on to others.

“I’ve been that kid that’s been told I can’t do something. I’ve been the kid that was cut from teams,” he said. “The first time I tried out for the basketball team in sixth grade, I didn’t make the team. I was always the kid that people said, ‘Aw, he can’t do this or that. No, he’s not good enough.’ But I figured out that if you work harder than somebody else, and if you put the time, effort and energy into it, you can accomplish whatever, and I want my students to see that they can do that.”

Growing up in Earlington, Jackson eventually made his basketball team. He played at Hopkins County Central High School until his senior year when he played for the famed Oak Hill Academy in Virginia.

After high school, Jackson went to the University of Georgia, where he played for the Bulldogs for four years while earning a degree in early childhood and family development.

Following college, Jackson lived out one of his lifelong dreams by playing basketball professionally. He played internationally for nine years and played in 17 countries.

“I’ve been all over the place,” he said. “It’s been a blessing, a kid from Earlington, a town with less than 2,000 people, having an opportunity to see the world, and while doing what I love has been absolutely amazing.”

Today, Jackson pursues his passion, youth education, both in the classroom and through training. He has come full circle and now teaches at Central. Jackson teaches special education for the Functional Mental Disability unit.

Jackson said he saw there was a need for the FMD unit.

“They hadn’t had a steady FMD teacher in a little while,” he said. “Everybody was like, ‘Man, FMD is so tough,’ but once I got in there and met the kids, I wouldn’t change it for the world.”

The most significant impact Jackson wishes to have on his students is to teach them confidence and self-respect.

One of the reasons Jackson returned home is to be a catalyst for change in the community.

“There’s a need for people who want to work with the youth, who have the right intentions and are willing to put in the time, effort and energy it takes to make change happen,” he said. “A lot of times we talk about change, but we don’t have action behind it. I tell people you should be the change you want to see, but at the same time, you can’t be a talker. You have to be a person of action. There are a lot of people around here that are people of action. We are starting to see some change, but we have a long way to go.”

Another reason for coming back is Jackson wants to be a bridge for the younger generation to connect with the older generations.

“I know a lot of kids look up to me. I know a lot of kids aspire to do what I do, plus more. And, I know the impact that I can have in Hopkins County, in the school system, out in the community,” he said. “I know that my presence and investing time into kids’ lives can make a difference in the community. I can’t do it by myself, but I also know that I can play a big part in being a catalyst for getting it started. I want to be that bridge that connects the younger and the older and really gets the wheels turning. I think some amazing things can happen around here in the next five to 10 years.”

For the last five years, Jackson has hosted a summer basketball camp at the Hopkins County Family YMCA. Jackson also does speed and agility training with local athletes.

“The reason I stated this is because kids are driving to Clarksville, Hopkinsville, Henderson, Evansville, or Nashville even, to get training that should be provided here,” he said. “We have a lot of good athletes, but their potential is not being maximized. I know a lot about training. I know what it takes to get the peak athleticism out of a person. I wanted to bring that to the kids, and I’ve had a great turnout, and there have been great results.”

Several of Jackson’s athletes have signed with colleges, and he said it’s in those moments when his students succeed that it’s worth all the time and effort they put it in.

“Those moments make all those long hours, early morning, late afternoons worth it,” he said. “I see how excited they get for accomplishing something, and that’s worth it.”

With his impact on the youth in the community, Jackson wants to instill confidence in the next generation.

“Once you get a kid to believe in themselves and be confident, the sky is the limit because that confidence can take you a long way,” he said.

Jackson and other staff members at Central are currently preparing for Olympic Field Day, which takes place in April. Olympic Field Day is an athletic event for more than 600 people with special needs. Jackson said the school is looking for people who are willing to donate their time and resources.