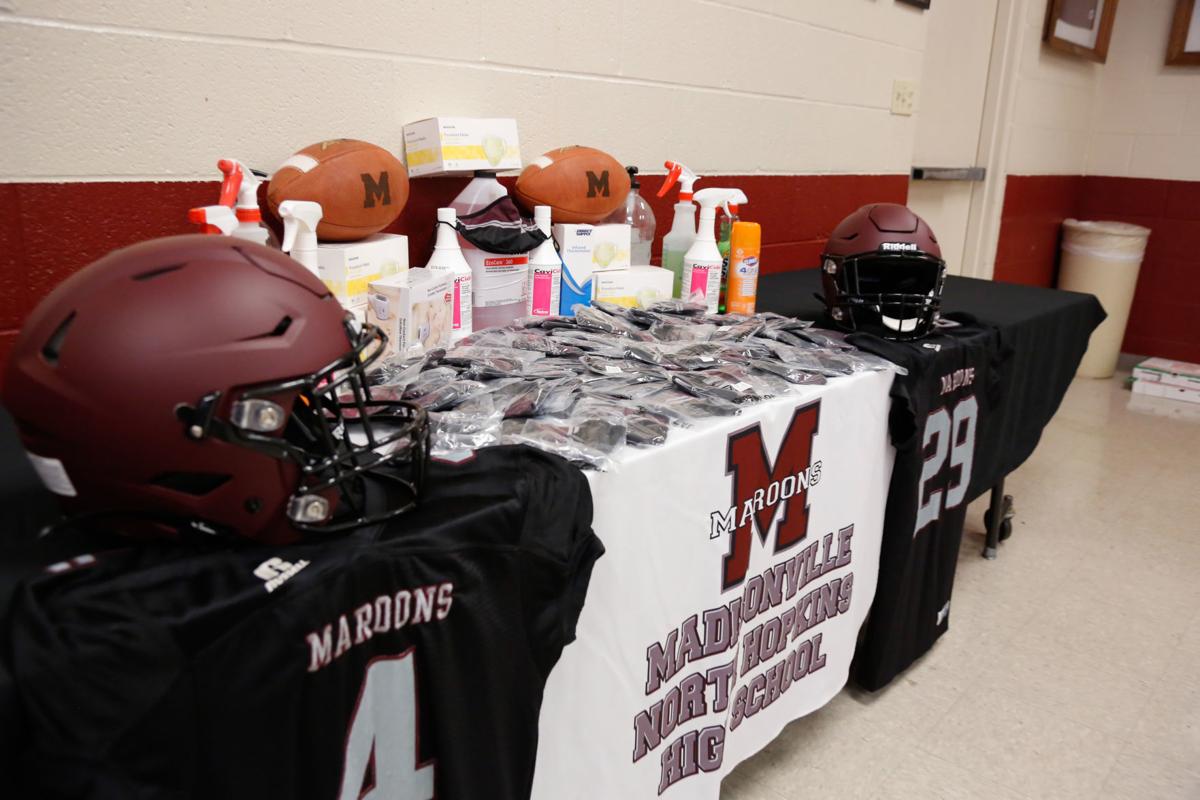 Madisonville-North Hopkins High School’s football team has 100 custom Maroon masks and 500 surgical masks. They have two laser thermometers, five gallons of hand sanitizer, and a lot of cleaning supplies to keep their facility as clean and healthy as possible during the pandemic. 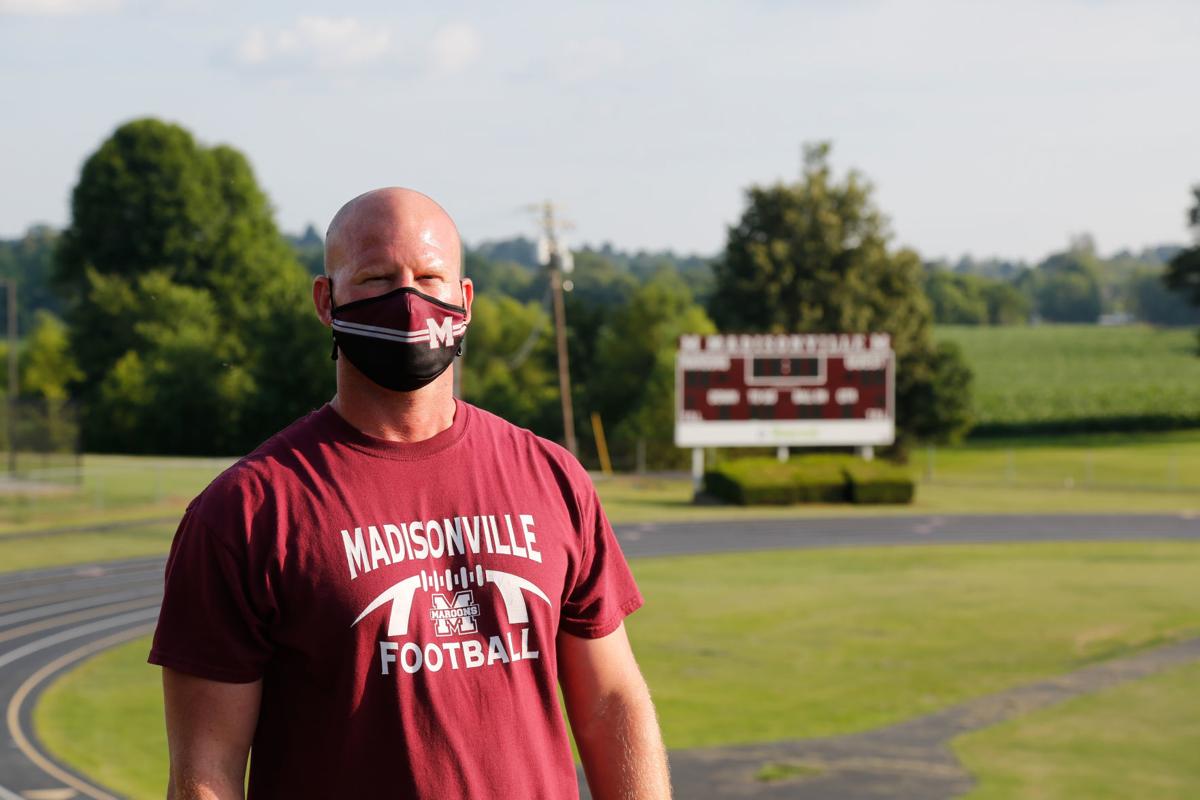 Madisonville-North Hopkins High School Football coach Jay Burgett stood by the field before his team’s workout last Friday. Burgett was elected to a Kentucky Football Coaches Associations group tasked with bringing football back safely. He represents class 4A, from Louisville to Murray.

Madisonville-North Hopkins High School’s football team has 100 custom Maroon masks and 500 surgical masks. They have two laser thermometers, five gallons of hand sanitizer, and a lot of cleaning supplies to keep their facility as clean and healthy as possible during the pandemic.

Madisonville-North Hopkins High School Football coach Jay Burgett stood by the field before his team’s workout last Friday. Burgett was elected to a Kentucky Football Coaches Associations group tasked with bringing football back safely. He represents class 4A, from Louisville to Murray.

Will Friday night lights show up this fall?

With athletic programs continuing through the Kentucky High School Athletic Association’s phased reopening, Burgett said his team is being diligent in maintaining a healthy environment for their athletes.

“This is huge, I mean, just being able to get back to football,” he said. “The social aspect for our kids, the mental aspect, the physical aspect, but more than that is we care about our players. We’re a family here.”

Burgett’s peers elected him to the Kentucky Football Coaches Association tasked with bringing their beloved sport back safely. He represents class 4A, from Louisville to Murray.

“Coaches all across the state voted on this,” he said. “We’re going to be part of the re-entry for football back in the state of Kentucky.”

This group will report their concerns and successes to the KHSAA for determining best practices for the state.

With North becoming a COVID-19 drive-thru testing facility for Kroger Health this week, Burgett said he doesn’t know when his team will be cleared to come back on campus to practice. Last week, his team met in shifts for workouts. Some met in the morning and others in the evening.

Going into his sixth year as head coach, he is concerned about his players, coaches and their health.

“I don’t want them taking this home to their families, I don’t want them doing things, and me be the issue because of that, or our football program,” Burgett said. “So we’re going to the extreme for some programs of making sure that we’re safe. We’re sufficient on all of our (Personal Protective Equipment). We’re just making sure that we’re doing it to the best of our ability.”

Before taking the week off, Burgett said his athletes would come to the practice facility and line up at six-foot increments, standing beside fence posts outside the football fields gate. Each student wears a mask at the beginning until they begin exercising, and only if they’re six feet apart.

There are five entry and exit points for athletes. A coach stands at each during the beginning of practice to record players’ temperatures.

The coach then asks them a series of questions, such as “Have you been exposed to someone with COVID-19?” Or “Have you traveled outside Kentucky within the last 72 hours?” Or “Are you experiencing any of the symptoms of COVID-19?”

Because of the temperature checks and the screening questions, Burgett said they had to send three athletes home.

One athlete’s parent had been tested for COVID-19, Burgett said once their test came back negative, the athlete was able to rejoin. Another had a persistent temperature of 102, so he was sent home, and the third was experiencing symptoms and was sent home as a precaution.

After entering, athletes would break up into five pods of 10 players with one coach — they alternate workout stations. The five areas at the complex are a manipulative station, speed and agility, platform lifting, a bench station and a rehab station where they work with bands and foam rollers.

“Once they moved to another area, we’ve got disinfecting sprays and all the different things we need to keep the things clean for each athlete,” Burgett said. “We spray. We wipe down. We do all the things to make sure that one player’s germs or one player’s touching doesn’t cross over to another player.”

The program has 100 custom Maroon masks, 500 surgical masks if a player forgets or doesn’t bring a mask. Burgett said they have two laser thermometers, five gallons of hand sanitizer, and a lot of cleaning supplies.

Jimmie Reed, the executive director of the KFCA, said they have been staying in contact with KHSAA commissioner Julian Tackett who has given guidelines from the state on how to move forward.

“Coaches are enthusiastic about getting started,” he said. “They are making the necessary adjustments and sacrifices that are needed to be able to implement all the new rules that we’re going to have to have in order to have football played this fall.”

Reed said he is in high hopes that football will return.

“I think there’s going to be some hoops that we’re going to have to jump through as far as what the commissioner is going to be guiding us to go through,” he said. “But I’m very confident that we will have football this fall.”

Some of the challenges the coaches face, Burgett said, is if other schools aren’t taking the same precautions.

“A lot of schools may not be doing all the things we are, and that’s one of the things I worry about,” he said. “Because the schools that aren’t doing it could hurt the ones that are doing it. I love football, it’s been my life’s passion, it’s given me a lot in my life, and I love the game, and I think the kids deserve to have a season this year. And we’re just working as hard as we can to get to that point.”

At Central, their boy’s soccer team has also been following the guidelines laid out by KHSAA. Both football and soccer are considered high-touch outdoor sports, which means that there can be no physical touching during workouts. Players are asked to bring their own balls to practice and can’t pass to one another, said coach Ben Lutz.

“We’re trying to follow all the rules laid out by the board,” he said. “You can only have a certain amount of people per coach.”

They have split their team up into groups. Each group has a different day they workout, according to Lutz.

Because players can’t pass to one another, Lutz said they are finding ways to be creative. One of those ways is practicing passing and touch drills against one of the school’s walls.

“We’re trying to do conditioning and incorporating the ball individually as best we can,” he said. “Like running sprints with a ball. We usually do weight room stuff, but I don’t want to do that right now. So, we’re trying to find ways to get stronger and doing different body weight exercises spread apart, like squats or push-ups.”

Lutz said his coaches too are checking players temperatures before practice.

“It’s a hassle, but it’s something. If we have to do it to keep our players safe, then you know that’s just another thing. Just add it to what people call the new normal,” he said.

Later this week, the KHSAA will release its next phase in reintroducing practices for fall athletics.

In Dawson Springs, the cross country team will begin practice at 7 p.m. Wednesday, July 15, at the Dawson Springs City Park. Students from grades 4 through 12 can join the team. All team members must have a sports physical to practice.