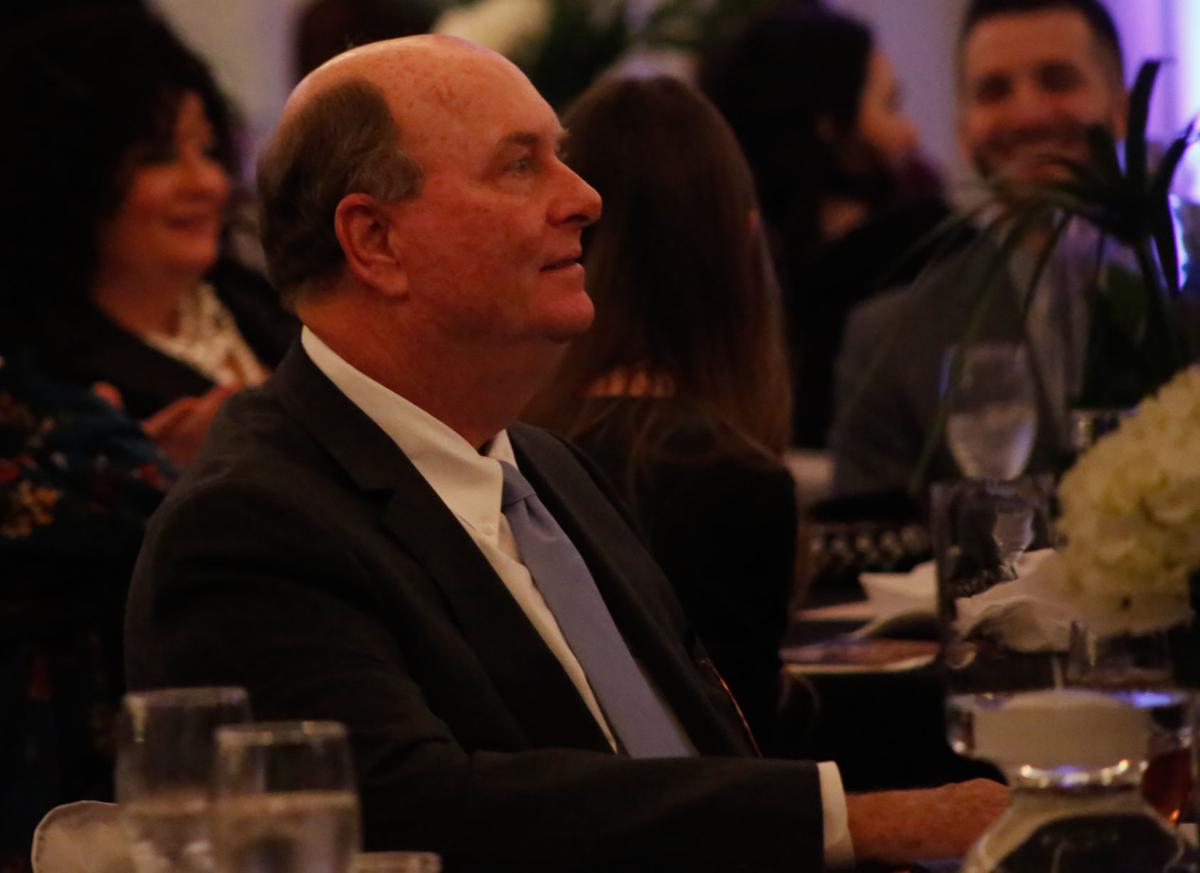 President of Hancock Bank and Trust Steve Cox sits at his table just as the award ceremony began Friday night at the Hopkins County Regional Chamber of Commerce Evening of the Stars event. Cox won the 2019 Corum Community Service Award during the event. 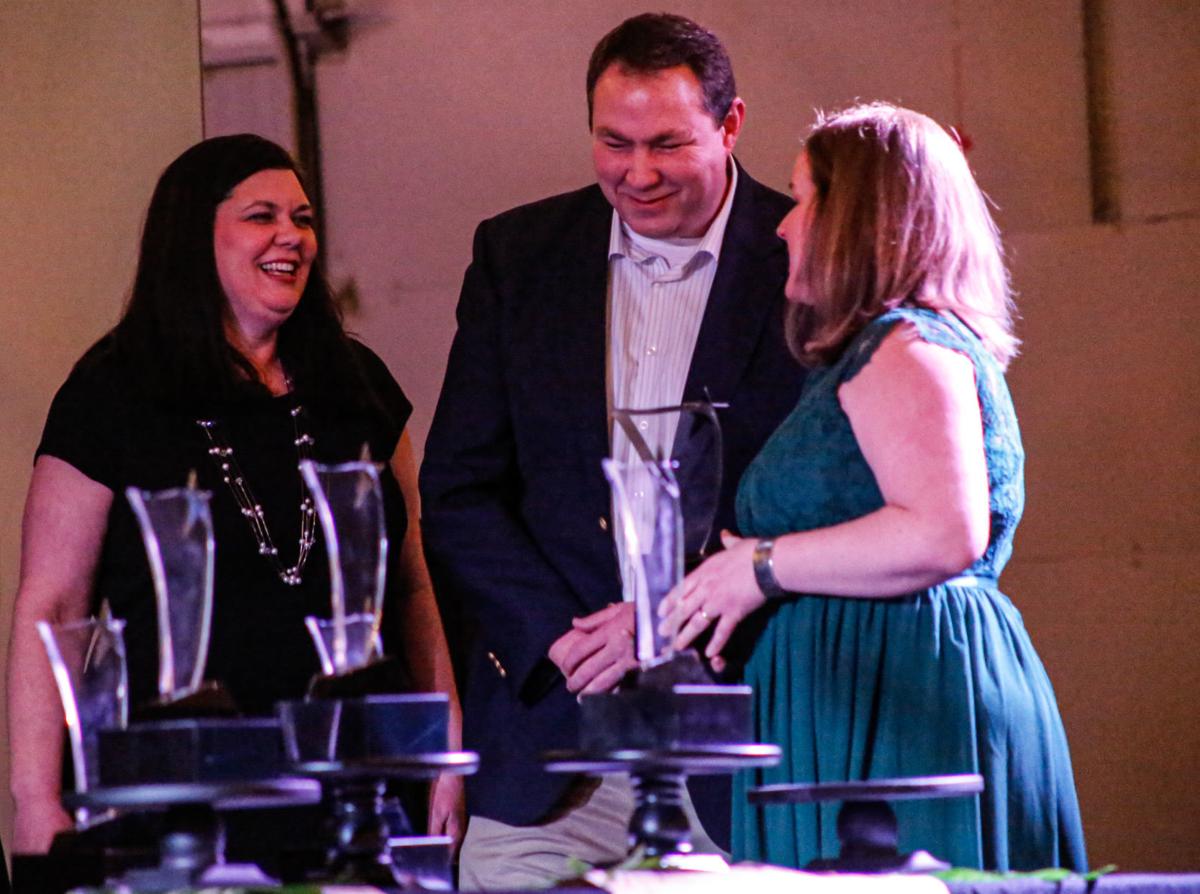 Suzanne and Kevin Maples, left, stand beside Rhea Ashby after the Maples won the 2019 Horizon Award for their business Campfire Roasters at Friday’s Chamber event. 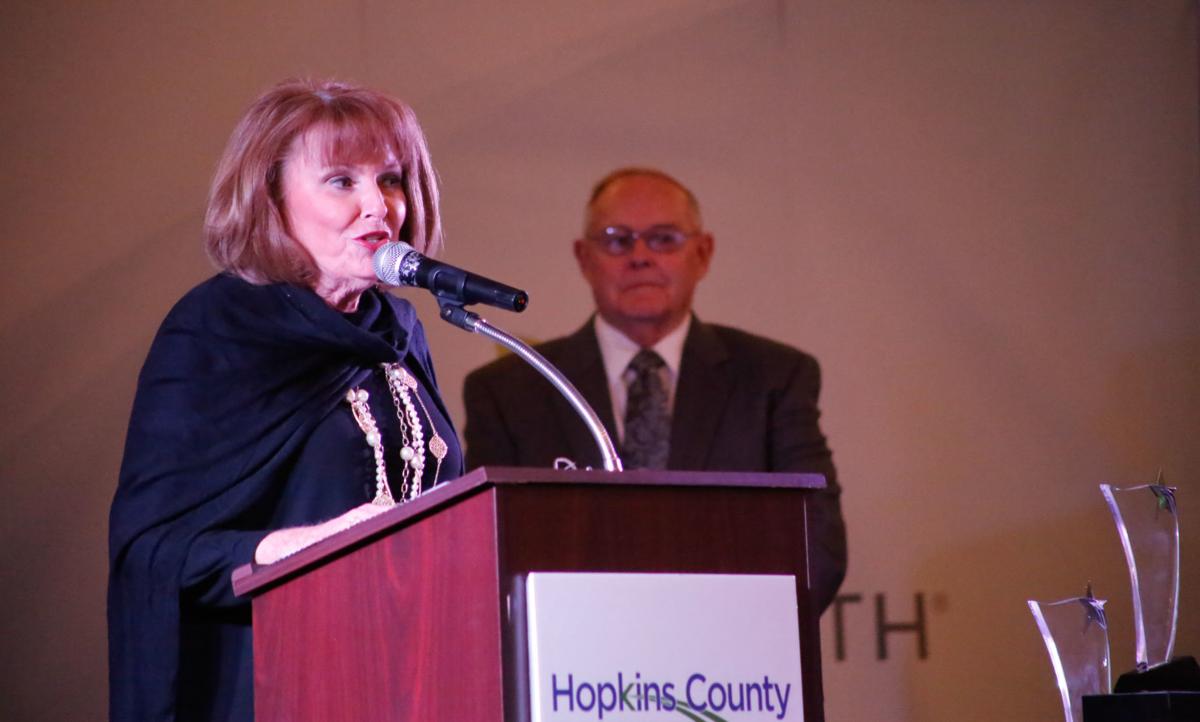 The 2019 Chamber Ambassador of the Year Tricia Noel gave her acceptance speech at the Ballard Center on Friday during the Evening of the Stars.

President of Hancock Bank and Trust Steve Cox sits at his table just as the award ceremony began Friday night at the Hopkins County Regional Chamber of Commerce Evening of the Stars event. Cox won the 2019 Corum Community Service Award during the event.

Suzanne and Kevin Maples, left, stand beside Rhea Ashby after the Maples won the 2019 Horizon Award for their business Campfire Roasters at Friday’s Chamber event.

The 2019 Chamber Ambassador of the Year Tricia Noel gave her acceptance speech at the Ballard Center on Friday during the Evening of the Stars.

Inside the Ballard Convention Center, guests were serenaded with big-band sounds during the Hopkins County Regional Chamber of Commerce seventh annual Evening of the Stars event, which was presented by Baptist Health Madisonville.

Many guests were dressed in their finest at Friday’s award show that annually honors outstanding businesses and individuals for their work in the community.

The event featured a social hour, dinner by Catering and Creations, entertainment by D.J. Magic Mike and its award ceremony. Nearly 300 people were in attendance this year.

As this event was organized during the interim of former Chamber President Leslie Curneal and current President Libby Spencer, operations coordinator Houston Knox and office assistant Jo Lynn Vincent were praised for their work curating the event.

“Houston and Jo Lynn have done a great job of making sure everything ran smoothly, and I think it was a wonderful event,” said Spencer after the event.

Taking home the 2019 Horizon Award for a business that has been in operation for three years or less was Campfire Rosters, which is owned by Kevin Maples and his family.

“We’re very thankful. We’re here tonight because Madisonville is a great place to do business,” said Maples. “I recognize that business is a competition, but I also know that a rising tide lifts all ships.”

The 2019 Small Business of the Year, which is awarded to a business with 50 or fewer employees, went to Ronald Johnson and Associates, an engineering firm that employes nine. Frank Williams, the company’s president, said he is thankful to be in Madisonville.

“Everybody helps everybody, they give you a leg up and it’s just a great place to live. I tell the staff, everything you’ll do has already been done, so do the very best you can, and don’t do what you’ve always done — think about how you can do it better,” he said. “I’ve said it many time; it’s a small company that does big things.”

With close to 1,000 employees in Hopkins County, the 2019 Business of the Year Award went to Carhartt. Director of Logistics Chris Cothran said because of the hard work and commitment of the community, Carhartt’s owners decided to build the nearly one million square foot facility in the county.

“Hopkins County is a prime geographical location for distribution,” he said. “We cover 67% of our customers within two days from this particular location. We’re proud to be partnered with Hopkins County. We generally stay in the background. We don’t look for notoriety. We just pride ourselves on doing the right thing for the right reasons.”

For only the second time at Evening of the Stars, the Chamber awarded a Non-Profit of the Year award. The 2019 award went to the Hopkins County Family YMCA. The Y’s CEO Chad Hart asked his board members (past or present) to stand, then asked for anyone in the crowd that had ever been a member to stand, then if anyone had ever had a child at a Y program to rise, nearly everyone in the crowd was on their feet.

“That’s true community impact,” Hart said. “Just in membership alone, we’re serving almost 6,700 members and between our outreach, well over 10,000 in the with roughly 42,000 population, that’s absolutely huge for one nonprofit. It’s something that, without the ones in this room, we are absolutely nothing, because we’re an organization built on volunteers.”

Tricia Noel was named the 2019 Chamber Ambassador of the Year. Jim McMurtrie presented her the award and said Noel was an ambassador for all things positive.

“She attends every event, every ribbon cutting with a smile and with excitement,” he said.

Noel said she was grateful for her fellow Chamber ambassadors for nominating her. She also expressed her love for the community.

“I want to take this opportunity to challenge each of you if you are not involved in something in this community to volunteer, the Chamber’s always looking for volunteers,” she said.

Two other individuals were honored at the event. Dr. Sree Kumar, the teaching chief of internal medicine at the University of Louisville trover campus, was presented the Loman C. Trover Award for having a profound impact on the health care of the region.

Chair of the Madisonville College Foundation, Steve Cox, won the Corum Community Service Award. The award is presented to a person who has outstanding community commitment.

“Madisonville is such a giving community,” Cox said. “I hope that each of you will work to teach your children and grandchildren how important it is to give because that’s the key to a successful community.”