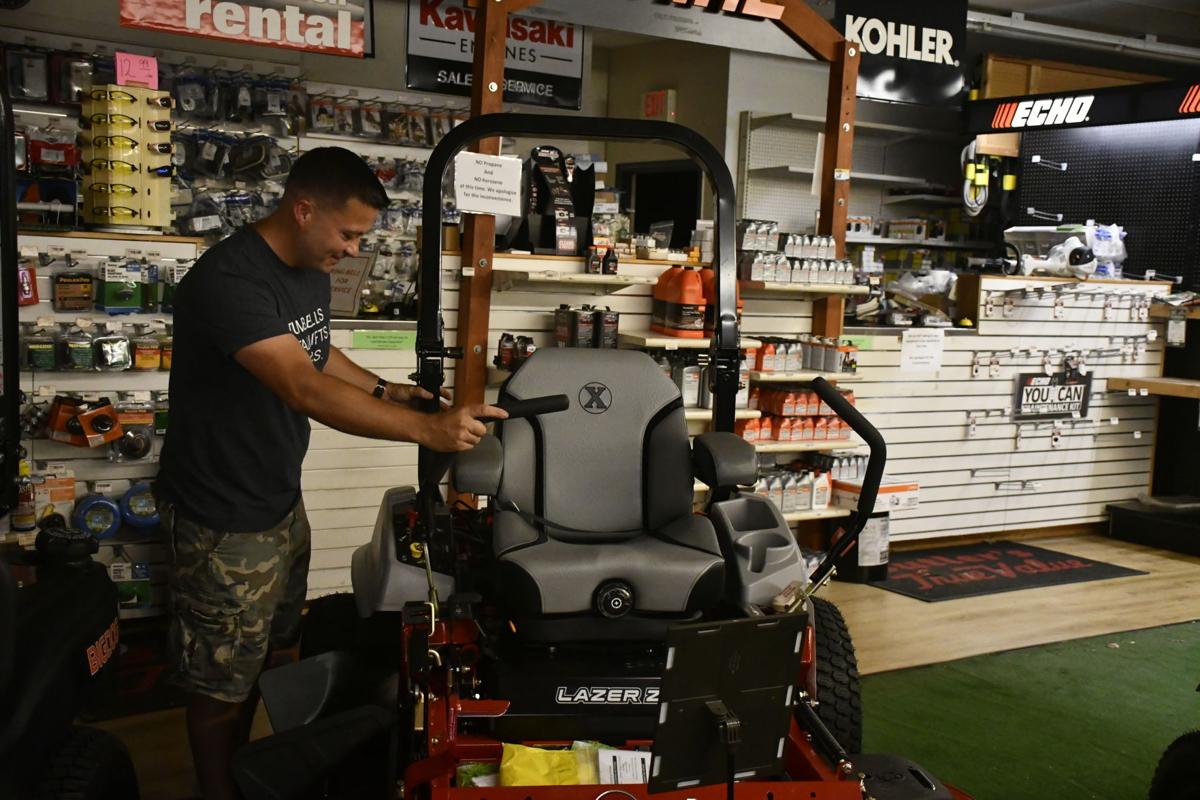 As part of the remodeling process, Ryan Clark has taken out some shelves in order to position the lawn mowers more at the store front. 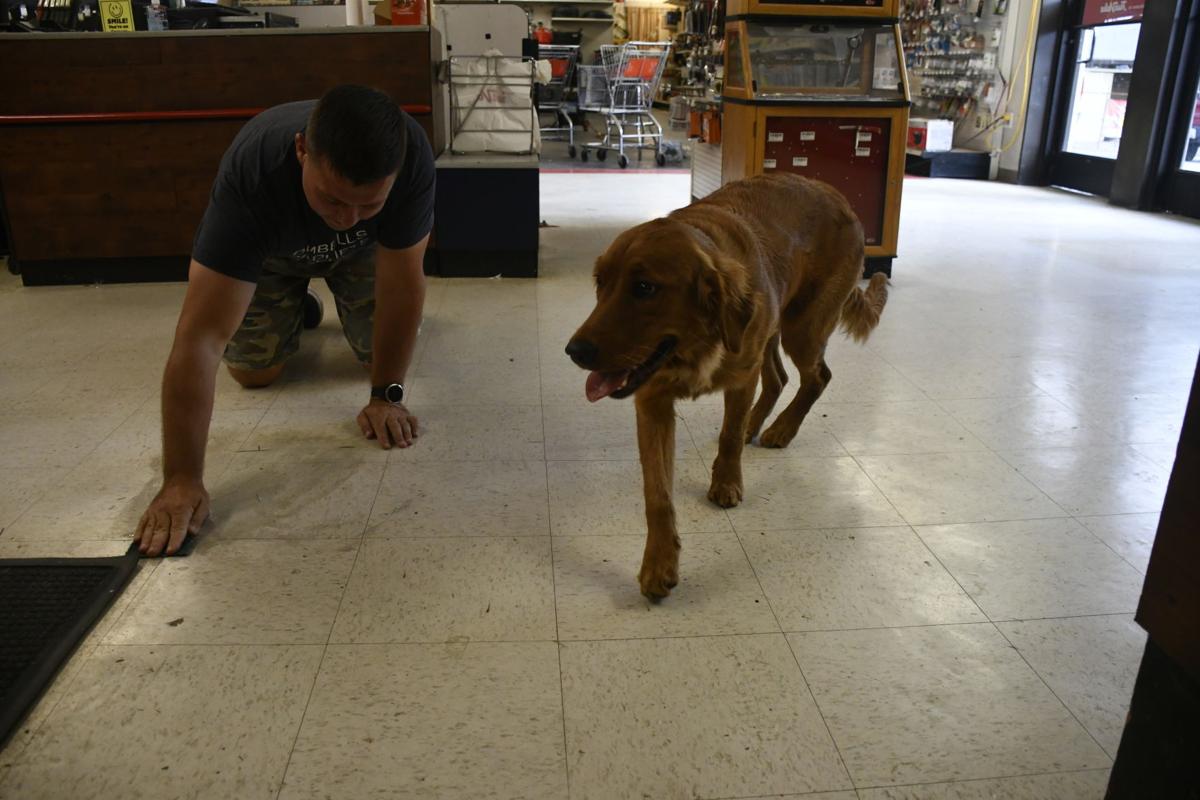 Ryan Clark, the new owner of True Value Hardware, scrubs the floor alongside his dog, Pickles. According to Clark, the store will undergo heavy cleaning and rearranging prior to its opening in September. 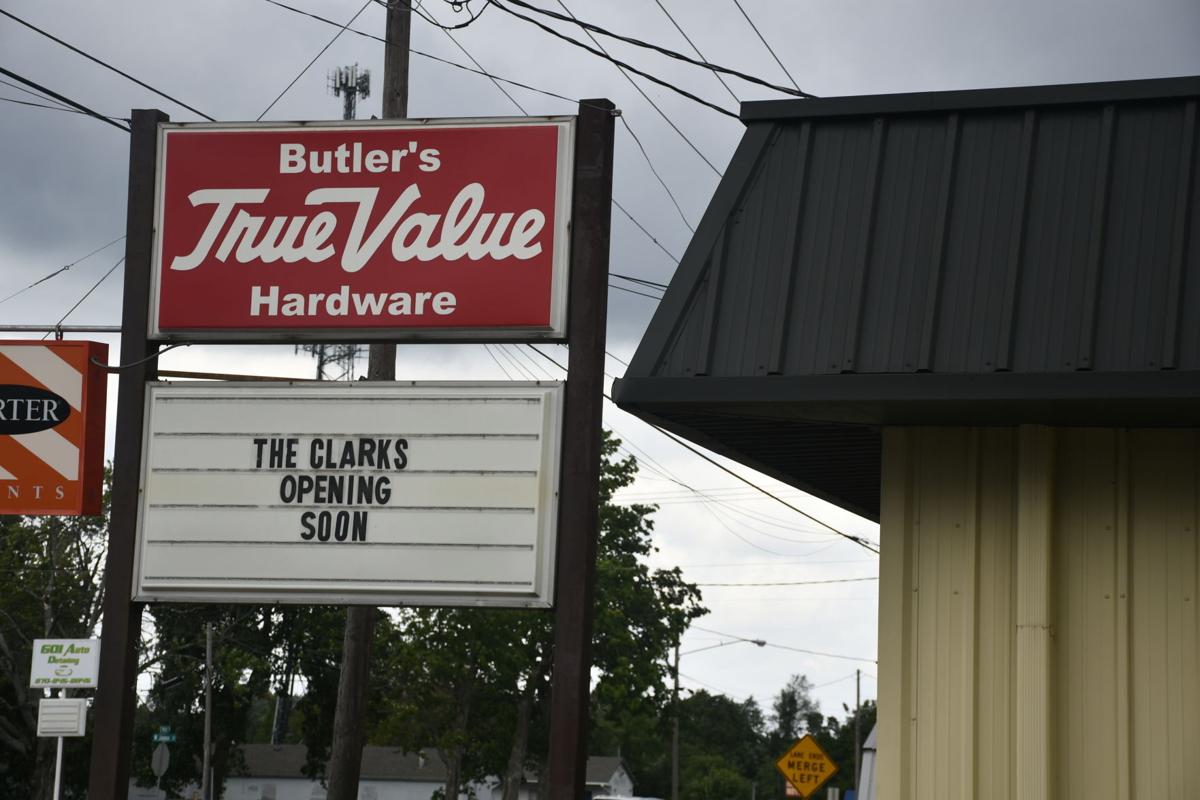 The sign on South Main Street says it all. The former Butler’s TrueValue Hardware store is now under new ownership, with a grand opening set for early September.

As part of the remodeling process, Ryan Clark has taken out some shelves in order to position the lawn mowers more at the store front.

Ryan Clark, the new owner of True Value Hardware, scrubs the floor alongside his dog, Pickles. According to Clark, the store will undergo heavy cleaning and rearranging prior to its opening in September.

The sign on South Main Street says it all. The former Butler’s TrueValue Hardware store is now under new ownership, with a grand opening set for early September.

The COVID-19 pandemic has impacted many small businesses across the nation. As owners struggle to keep their heads above water, one Madisonville couple has recently decided to dip their toe into the turbulent waters of opening a small business during a pandemic.

“The best time to do anything is now,” Ryan Clark, the new owner of the True Value hardware store, said.

Clark and his wife, Michelle Pennaman-Clark, purchased the store earlier this year when the former owners decided to sell the business and move to Texas to pursue a ministry.

“I really like True Value just because it’s got such a history and everybody comes here,” Clark said.

The hardware store has a strong connection to the local community, Clark said. The store opened in Madisonville in 1929 and has been located at 624 South Main Street since the 1970s.

According to Clark, he wasn’t interested in operating his own business until he tried to go to True Value one day and discovered it was closed. When he found out there was a possibility of the store closing permanently, he contacted the owner and offered to buy it on the spot.

“Guys like me, I’m always kind of looking for something,” Clark said. “When this opportunity came up, it was like a no brainer.”

Since March, businesses in Kentucky have been forced to adjust to constantly changing circumstances, such as partial or complete shut downs, capacity limitations and facial covering mandates.

Purchasing and operating a small business is already enough of a risk for many people — but Clark said he feels no such trepidation about opening True Value during this time.

“I guess there’s a certain level of fear,” Clark said. “To be honest, I’m not feeling it. I don’t feel any fear about this whatsoever. I’m not nervous about opening.”

Hardware stores such as True Value are considered “essential businesses” by Gov. Andy Beshear. Because of this status, True Value is less likely to completely shut down even if the second spike of new COVID-19 cases cause the governor to issue another wave of vendor closures.

According to Clark, he would argue that now is a “great time” to operate a local business due to the raised awareness around the importance of shopping locally.

According to Clark, he and his wife have had an overwhelming amount of support from the community already, and he anticipates the support to grow once the store opens.

True Value is anticipated to open during the first week of September. The store is now in the midst of remodeling its physical appearance and restocking its inventory.

According to Clark, the store will be rearranged to promote more open spaces rather than cramped shelving areas.

The inventory will also include a wider selection of power tools and home goods. In addition, the store will be “super service-oriented,” Clark said.

Since True Value will open in a few months, regulations related to COVID-19 are likely to still be in effect. Clark said the store will be compliant and follow all state recommended procedures to ensure the health and safety of their customers.

According to Clark, he highly encourages those looking to enter the realm of operating one’s own business to do so immediately. If one is looking to start a business only at the right time, it will never be opened, he said.

While timing is certainly an important aspect of starting a new venture in life, it’s only one factor of many others, according to Clark.

“My perspective is: if you work hard enough, you make the right contacts, you treat people right and you give them the service they deserve and they want, you’re going to be successful,” Clark said.