Will Cox provided a copy of his deceased uncle’s stimulus check that he returned to Congressman James Comer. More than 1 million checks totaling $1.4 billion were mailed to deceased individuals across the nation as part of the stimulus package. 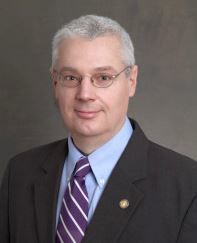 VOID is handwritten in bold, capitalized letters with a bright red Sharpie across a coronavirus stimulus check for $1,200. Beside the name of the check’s recipient, John H. Cox, is another word: DECEASED.

The federal government reportedly sent over one million stimulus checks to deceased individuals, totaling a loss of $1.4 billion, according to a recent report from the U.S. Government Accountability Office.

One of those recipients was John Horace Cox, a veteran and retired teacher from Hopkins County.

He passed away in March 2019, and his family immediately notified the appropriate agencies, such as the United States Department of Veterans Affairs, the Social Security Administration and Center for Medicare Services, of his passing.

John H. Cox’s family still has a P.O. box in his name that would be routinely checked by the executor of his will, Local Attorney and Former Mayor Will Cox. When Will Cox checked the P.O. box in April of this year, he was surprised to find a check in his uncle’s name from the U.S. government.

“He wasn’t impacted by the virus,” Cox said. “That money is supposed to go to folks who need it.”

In late March 2020, Congress approved of an economic-relief package for U.S. citizens impacted by the economic-related issues stemming from the COVID-19 pandemic. If citizens passed certain requirements such as specific parameters for annual income, individuals would be sent $1,200 and families up to $2,400 by the federal government in an attempt to relieve personal stress on households and re-stimulate the economy.

In the hustle to send out these payments, the Treasury Department and Internal Revenue Services bypassed standard protocol that would have caught the discrepancy, GAO reported. The U.S. government was only made aware of the issue after the initial three waves of payment, which total up to 72% of payments up to May 31, according to GAO. The error is now reportedly fixed and proper filters will be used.

According to Cox, he initially found the discrepancy to be “kind of funny.” He was shocked that the federal government could perform such an error, and he began to wonder if this problem was occurring on a national scale. The more he thought about it, the more Cox felt obligated to send the check back and inform his local representative of the mistake.

“If my uncle was getting one, that told me that I bet a bunch of other people were getting them,” Cox said.

On May 6, 2020, Cox sent the voided check and a letter of explanation to the office of Kentucky Representative James Comer. According to Cox, he felt compelled to contact Comer in particular because the congressman is a member of the U.S. Committee of Oversight and Reform as well as represents Madisonville in Kentucky’s First District.

“I just wanted my Congressman, who, in my opinion, has not provided much oversight about the way the administration has handled its coronavirus response and relief efforts, to know that at least one constituent expected him to do his job,” Cox said.

Cox has yet to receive a response from Comer’s office.

Multiple attempts to reach Comer for comment were unsuccessful.

As a former administrator in city government himself, Cox said members of the federal government should be held accountable by voters for the misuse of $1.4 billion in taxpayer money.

“I dislike wasteful spending as much as everyone else does,” Cox said.

The IRS has previously stated that citizens must return stimulus payments if they were sent in error. There are no current plans to further recoup the loss that have been released, according to a Washington Post article about the incident.

Cox said his conscience has been clear since he voided the check and sent the letter. He said he takes comfort in the fact that he handled the situation the way his uncle would have wanted him to.

“I sleep fine at night knowing the way I handled it,” Cox said. “As for how (the federal government) handled it, I think it speaks for itself.”

This week, President Donald Trump has advocated for another round of stimulus payments, and it is reportedly being considered by Congress.