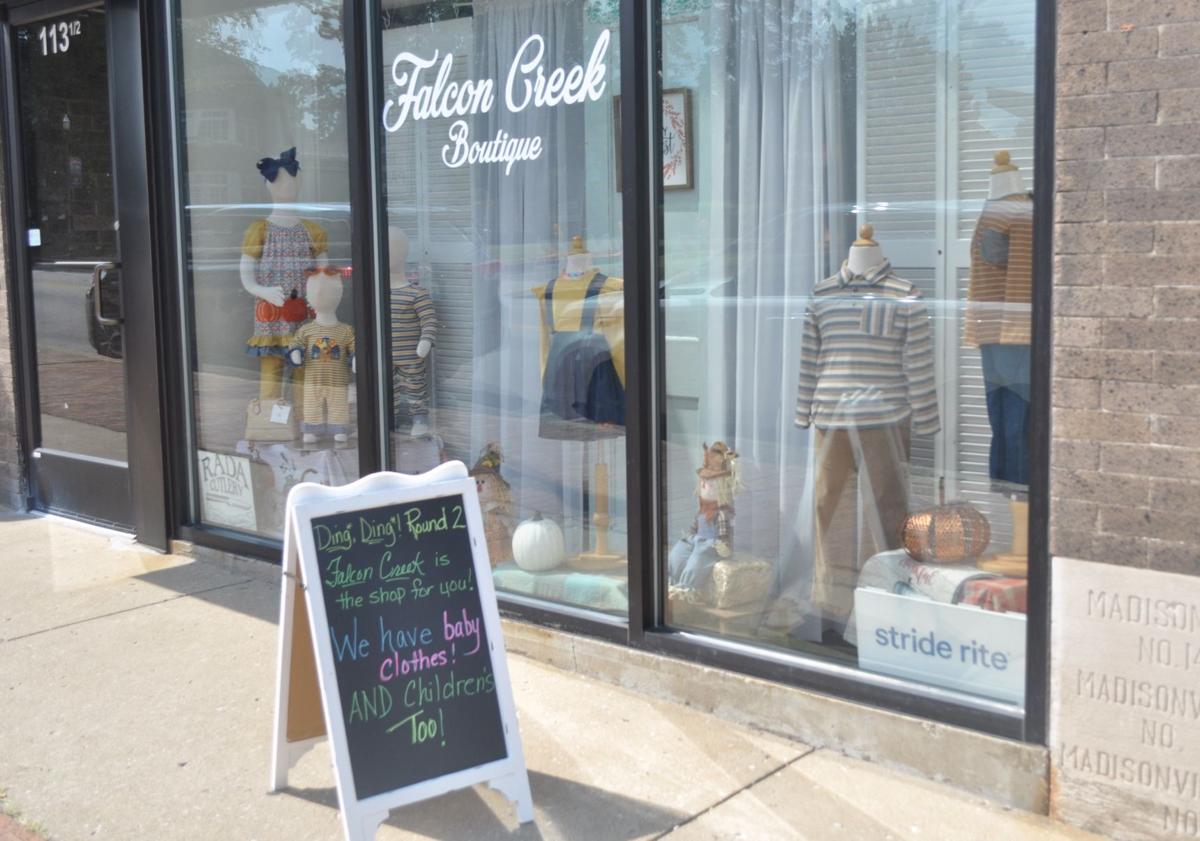 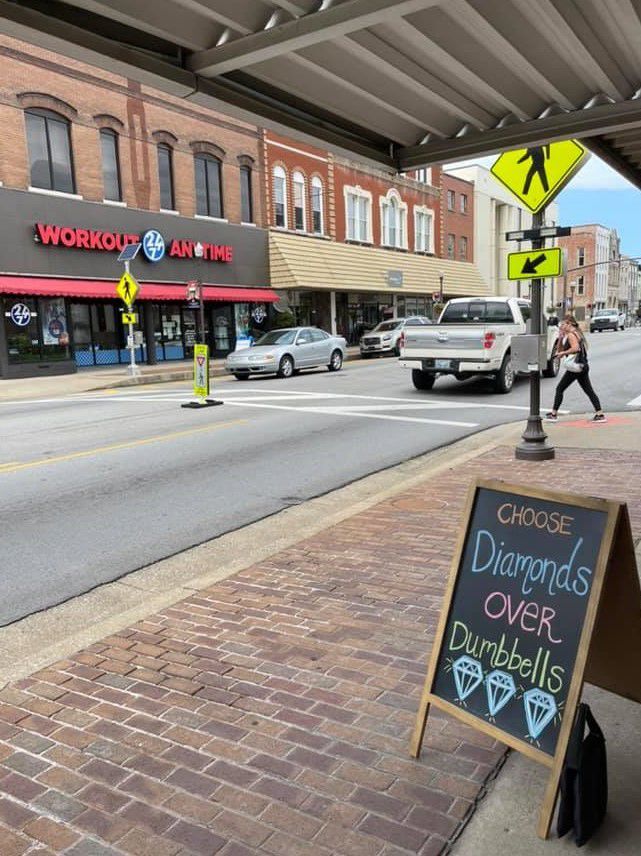 Clement’s Jewelry started off the sign wars among the Hopkins County businesses last week after going after Workout Anytime. 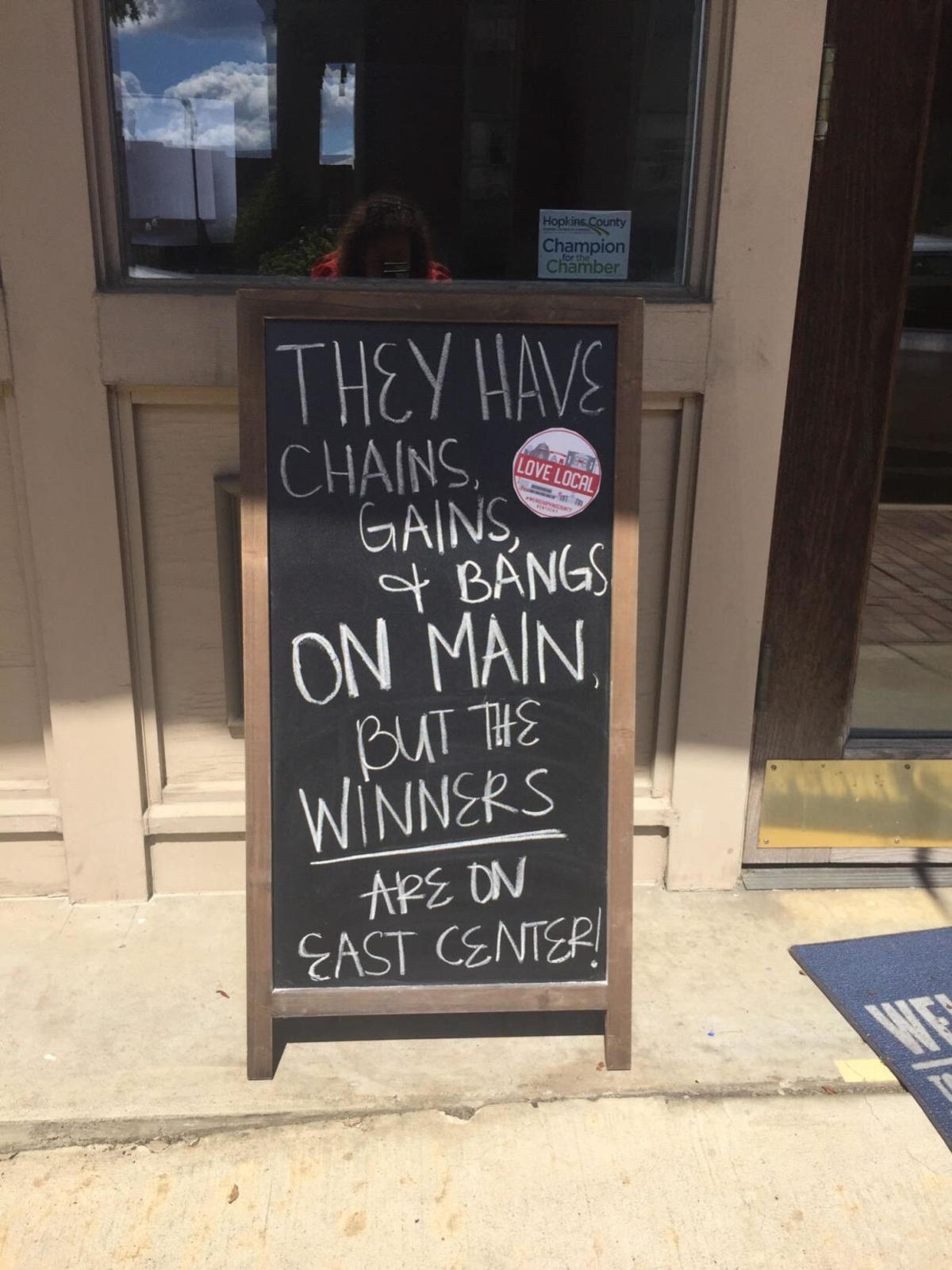 The Hopkins County Regional Chamber of Commerce got in on the sign wars by posting their own sign outside their offices and on social media.

Clement’s Jewelry started off the sign wars among the Hopkins County businesses last week after going after Workout Anytime.

The Hopkins County Regional Chamber of Commerce got in on the sign wars by posting their own sign outside their offices and on social media.

What started as one business poking fun at another on Wednesday turned into a full-out sign war among the more than 56 Hopkins County businesses.

Co-owner of Clements Jewelers Taylor James said her husband had the idea to poke fun at the gym across the street from them, Workout Anytime on Main Street.

“They always take up a bunch of parking, and we always mess with them,” she said. “He asked if it would be OK if we put it on Facebook, he didn’t want to rub anyone the wrong way, and we knew the owners, so I said ‘No, I think they would think it was funny.’ ”

The sign that started it all was “Choose Diamonds over Dumbbells.” She said Hadassah Hair Studio and Workout Anytime were the first businesses to clap back with a sign of their own.

“It has blown up, and it has been really good for the community,” said James. “It has been amazing watching every single business come up with something quirky and have their own little revelry.”

She said even businesses that may not have brick-and-mortar locations or businesses that don’t put out signs have gotten in on the war. They will make something on the computer and print it out to post in a window or on social media.

“We did not think it would become a whole sign war, we just thought it would be a little cute banter between small businesses,” said James.

Even the Hopkins County Regional Chamber of Commerce got in on the sign wars action by posting something to their social media last week.

Lisa Miller, director of membership for the chamber, said the sign war is doing a lot of good for the community and small businesses.

“We had some new businesses tell us that there were people who had no idea they had opened their business because they had opened during the pandemic,” she said. “We had others that said they felt like it had attracted some regional businesses because people were sharing to friends and people who may not live in the Madisonville area.”

Miller said there was such a diverse group of businesses contributing to the sign war, including gyms, churches, restaurants, recreation places and service businesses.

Falcon Creek Boutique, owned by Joanna Odum, even got into the sign war. She said her daughter-in-law heard about the war and told Odum what to post on their sign, which read “No bangs, no chains, no gains, but we do have lots of baby thangs.”

She said the sign was going after Clements Jewelry, Workout Anytime and Hadassah, which are all on Main Street with the boutique.

“There is so much negative going on with COVID and people sick and people dying and this is just something fun to go around town,” said Odum.

Miller said the sign war is bringing a little levity and laughter during this time.

“I had a nurse who deals with COVID daily tell me that it was the best thing going on for her right now with the sign wars,” said Miller. “It brought some laughter.”

“I don’t think everyone will do it for that long, but I definitely think downtown will keep it going for a while,” she said.