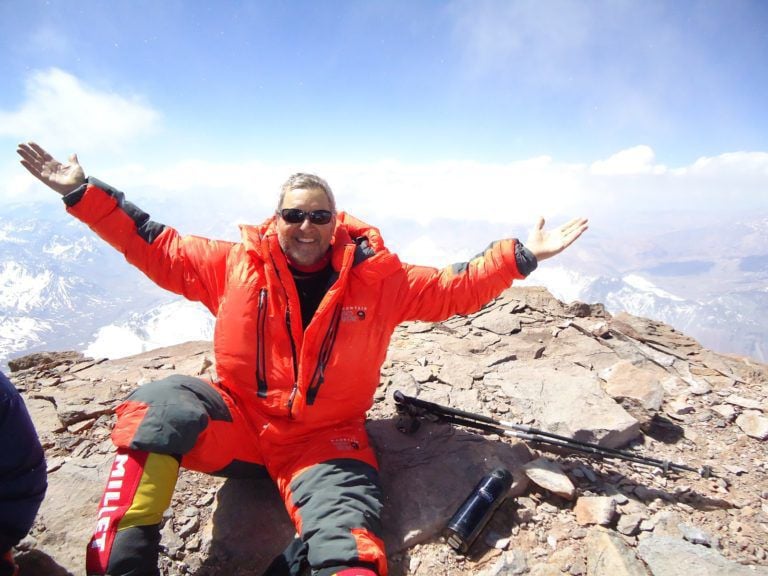 Alpinist Gary Ervin, of Union County, raised his hands after completing one of the seven major summits in the world. 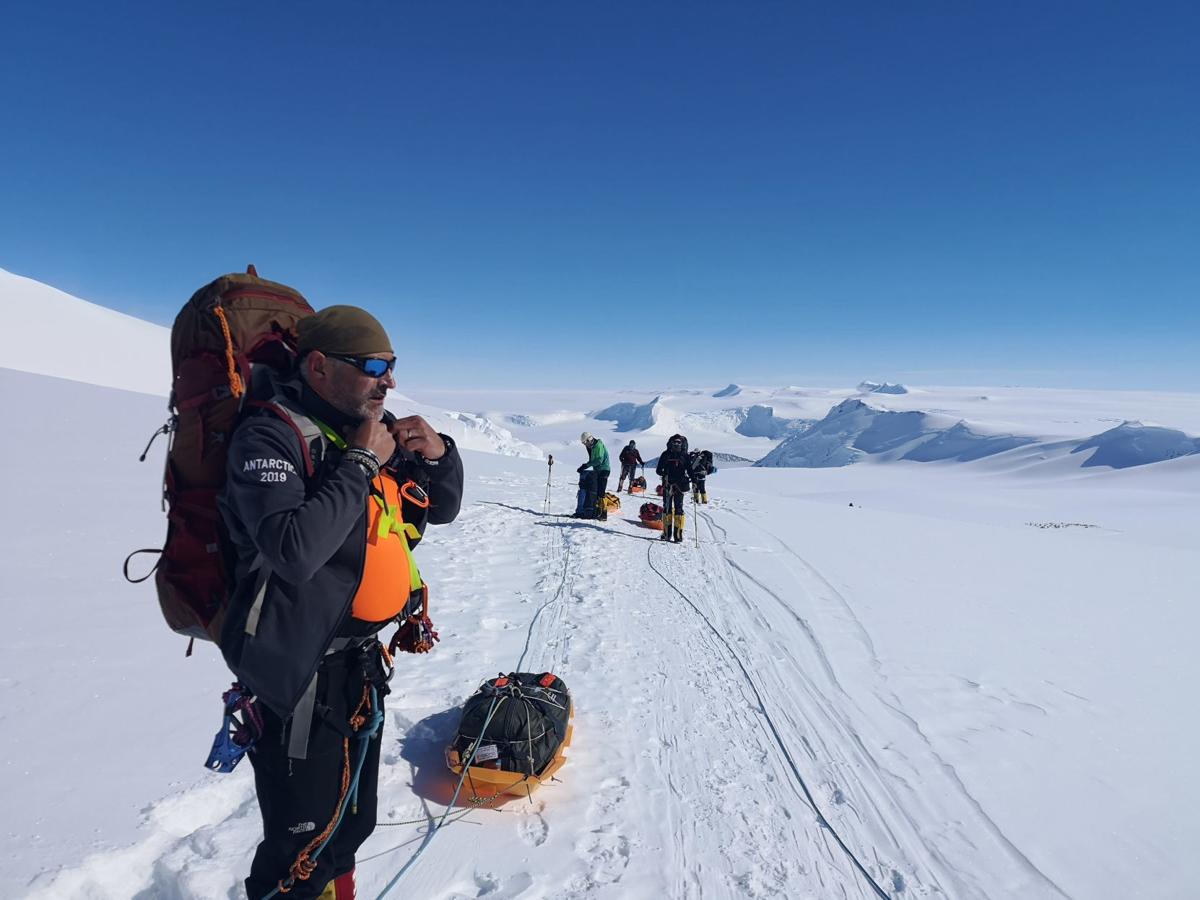 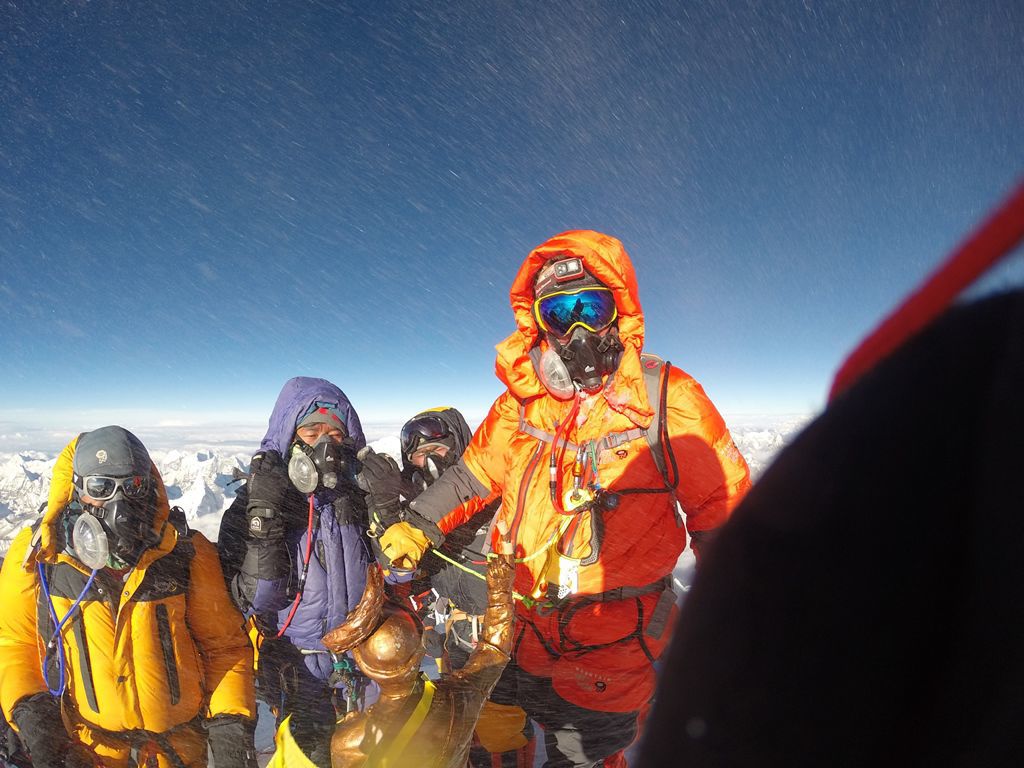 Gary Ervin, right, stood on the summit of Mount Everest in 2018.

Alpinist Gary Ervin, of Union County, raised his hands after completing one of the seven major summits in the world.

Gary Ervin, right, stood on the summit of Mount Everest in 2018.

For four months out of the year, alpinist Gary Ervin of Union County is on the side of a mountain somewhere in the world.

On Tuesday, Ervin will be the keynote speaker at the Hopkins County Genealogical Society’s monthly meeting.

“It all started six years ago in Africa, after my daughter and I did two seasons of the ‘Amazing Race’ on T.V.,” said Ervin. “I got to see a lot of the world that I wanted to go back and explore a little bit more in-depth. I started climbing mountains and have been on a mission to get all seven of the major summits completed.”

Ervin, 62, said he is about twice the age of most people trying to accomplish what he’s doing.

“Because of my age, I’ve got to have credentials and the experience to join these expeditions,” he said. “They’re not real crazy about getting a 62-year-old guy to climb with them, even though I do have a pretty good resume of big mountains.”

Training for these climbs is no easy feat. Ervin trains seven days a week, including three hours each day where Ervin carries heavy weights and a heavy pack on an incline treadmill.

“Most of it’s just long, boring trudges on a treadmill,” he said. “Once a month, I go to Colorado for six days, and I climb. This last time I was able to climb with my winter gear. That type of training is fun, and it’s not painful. The painful stuff is in my basement on the incline treadmill, watching three hours of T.V.”

This year, Ervin hopes to finish his pursuit of the 7th major summit. However, last April nearly stopped his journey. While training for his final summit, Denali, Ervin climbed Island Peak, a mountain adjacent to Everest, he had an aneurysm and almost bled to death.

“I spend eight days in an ICU in Katmandu. Four surgeries later, I finally got out,” he said. “I just recently returned from Papua New Guinea, where I climbed the highest peak in Oceana. I’m training now for Katmandu in February and then training again for my final of the seven summits, which will be Denali in May.”

For Ervin, one of the most rewarding components of his journey are the people he encounters.

“What comes with the mountains is a different continent, it’s a different part of the world. A different culture that surrounds it,” he said. “It’s probably as rewarding, just experiencing the people that I’ve met in these different cultures. I know there is a mountain top associated with this journey, but I know it’s also a new experience, a new set of people I’m going to meet when I go on to that mountaintop.”

When talking with groups about his experiences, his central message is for people to explore the world.

“There is nothing like sparking the interest in a person’s life to seek adventure,” said Ervin. “They don’t have to travel to Nepal to do it, they can do it there — they just have to be curious. I don’t know if it’s for everybody, but always challenge yourself and be curious about the world and your surroundings, and not just inside your cell phone or inside of a job — don’t let that control you.”

Ervin is the executive chairman of Ervin Cable Construction, LLC. A business that he started with two of his brothers. They build fiber-optic networks for companies, such as Google, and are deploying the first 5G network in the United States in Houston, Texas. They have over 30 locations in the United States, with their main headquarters located in Sturgis.

His presentation for the Hopkins County Genealogical Society will focus on the history of the seven summits and his personal experience along the way.

The genealogical society meets at 7 p.m. Tuesday, Jan. 28, at the Hopkins County Government Center on 56 N. Main Street in Madisonville.