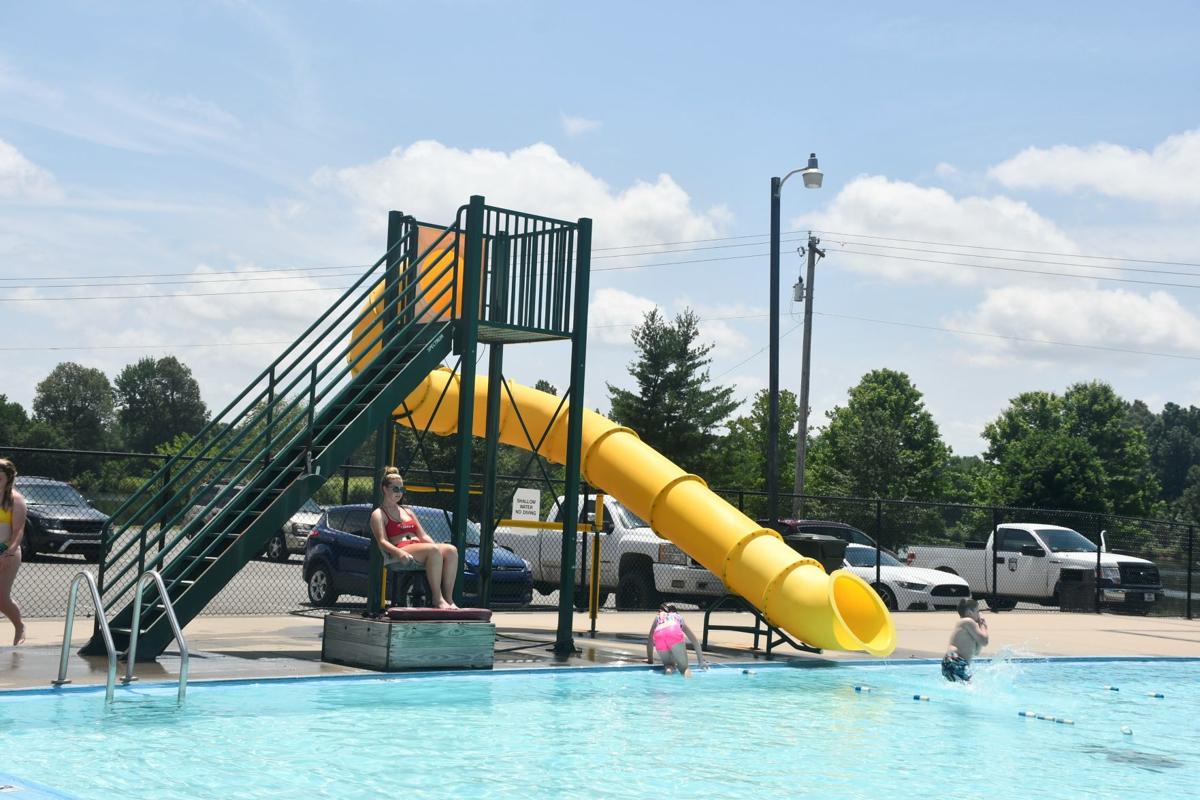 Lifeguard MaKenzie Marks, seated, was one of two lifeguards on duty at the pool on Monday. This is her second summer as a lifeguard for the city pool. 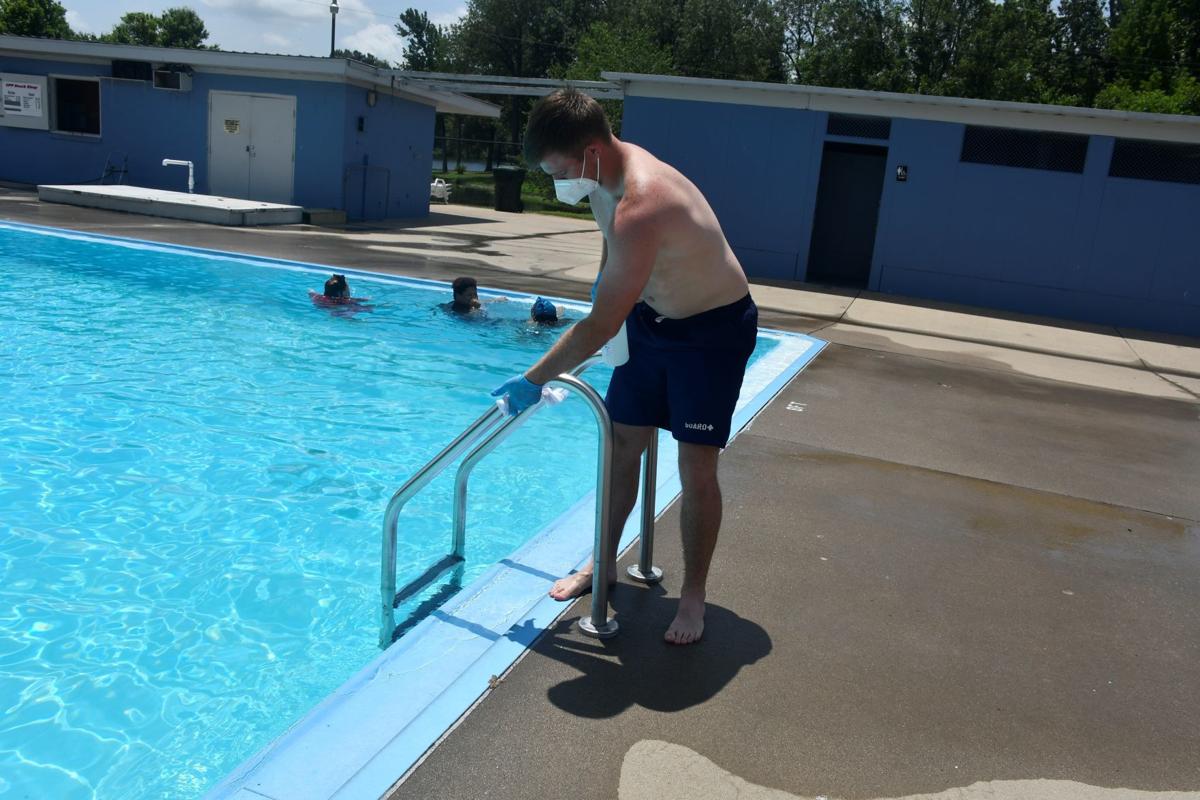 High-touch areas such as ladders and handrails are sanitized by staff personnel at least every hour, according to manager Dalen Gipson (pictured here). Lifeguards are required to wear masks and gloves during sanitation efforts.

Lifeguard MaKenzie Marks, seated, was one of two lifeguards on duty at the pool on Monday. This is her second summer as a lifeguard for the city pool.

High-touch areas such as ladders and handrails are sanitized by staff personnel at least every hour, according to manager Dalen Gipson (pictured here). Lifeguards are required to wear masks and gloves during sanitation efforts.

As Monday’s temperatures reached a boiling point of 90 degrees, citizens were eager to visit Madisonville’s public pool on its long-anticipated reopening for the summer.

The turnout for opening day was positive despite COVID-19 safety restrictions and minor weather restraints, according to pool employees.

The city pool is now open from 11 a.m. to 5 p.m with a maximum capacity of 89 patrons at one time, as mandated by state prerequisites. Staff are taking firm measures to ensure the safety of the city pool patrons and employees.

There was a minor delay Monday in patrons using the pool because thunder began rolling in, Lifeguard Justin Hallum said. For safety, staff personnel required visitors to remain outside the pool for 30 minutes. When the sky cleared up, visitors were able to resume swimming.

Hallum said the pool area remained at approximately 60 visitors at one time throughout the day, which adhered to capacity guidelines.

According to Pool Manager Dalen Gipson, while safety has always been a main priority for employees, they have stepped up efforts considerably such as frequently disinfecting items, limiting patron capacity and controlling equipment use.

High-touch areas like ladders and handrails are sanitized at least every hour during routine pool breaks, which is the brief amount of time when visitors are asked to refrain from using the pool. Bathroom facilities are also cleaned every three to four hours by members of the staff.

During previous summers, multiple chairs were stationed throughout the pool area for visitors to use. As an extra step of precaution, chairs are now stored outside the pool area, and patrons must sign them out individually to use for the duration of their visit. When the patron exits the pool area, employees thoroughly disinfect the chair and place it back in storage until it is signed out again.

Social distancing of at least six feet apart among visitors is strongly encouraged by staff.

“We recommend social distancing as soon as people come in and keep recommending it throughout the day,” Gipson said.

Gipson acknowledged that social distancing is difficult to achieve while visitors swim. To mitigate germ-spreading within the pool, the water has a higher concentration of chlorine than previous summers.

The state requires one lifeguard per 25 patrons at a time, but Madisonville has guaranteed one lifeguard per 10 patrons in a commitment to safety. The park has enough lifeguards to be stationed at the pool throughout the day in rotating shifts, but the pool area is working with a limited staff, Gipson said.

There are typically seven lifeguards at the pool in the summer, but due to classes of certification being unavailable up until recently, there are currently only four on staff.

Individuals must already be certified as a lifeguard before inquiring about a summer position. Hallum received his certification through an online course provided by the Red Cross, but individuals can also receive in-person training at The Hopkins County Family YMCA. The Y plans to host two classes in July, and registration for those classes are now open.

According to Gipson, lifeguards do not have to wear facial coverings while they are outside on duty, but they are required to wear masks and gloves when they work at the concession stand, operate the desk and sanitize equipment. Lifeguards also frequently use hand sanitizer throughout the day.

In addition to being open for public use, the city pool is open to rent for social gatherings of 50 people or less. The rental time must not be within operating hours, and two lifeguards will be stationed there for its entirety.

While this is Gipson’s fourth summer as a lifeguard at the city pool, this is Hallum’s first. Hallum described the experience as being enjoyable so far and appreciates the opportunity to help Madisonville citizens escape the summer heat and convene together as a community.

Gipson said he is optimistic that the turnout at the city pool will continue to increase as the summer continues. Regardless of the pool’s popularity, health and safety will remain the top priority for employees.

“There’s definitely still going to be people who won’t bring their kids out,” Gipson said. “But we are doing everything we can to keep it all as germ-free as possible.”