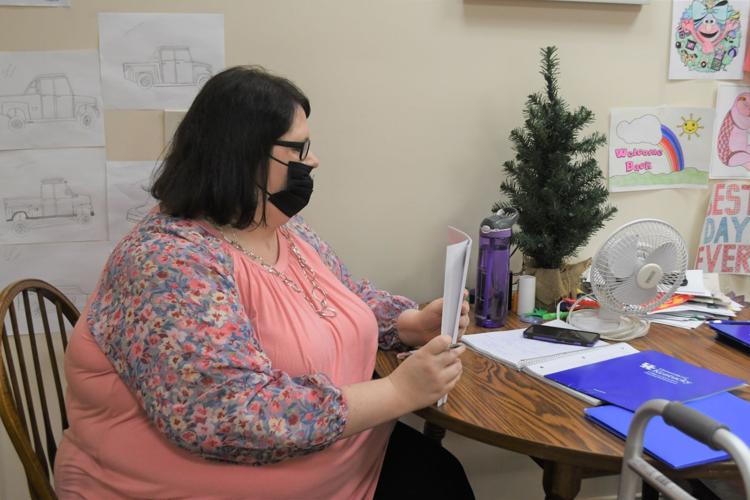 Kriston Cope fills out an application for Mountain Comprehensive on her last day of interning before she graduates with a Bachelors in Social Work from Campbellsville University. 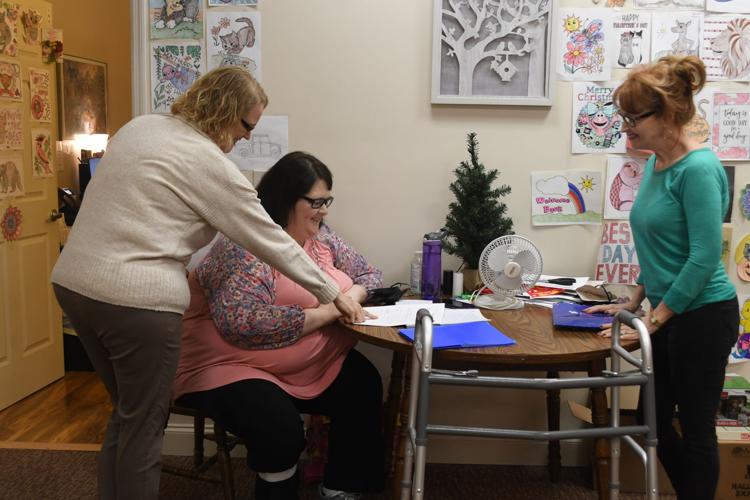 Kara Cardwell, left, and Karen Hober, right, both with Mountain Comprehensive, give their intern Kriston Cope advise on her last day as an intern.

Kriston Cope fills out an application for Mountain Comprehensive on her last day of interning before she graduates with a Bachelors in Social Work from Campbellsville University.

Kara Cardwell, left, and Karen Hober, right, both with Mountain Comprehensive, give their intern Kriston Cope advise on her last day as an intern.

Getting a college degree is difficult in itself, but doing it while suffering the long-term effects of COVID-19 adds an extra layer of difficulty.

This situation is all too real for Kriston Cope, who was working on a bachelor’s degree in social work from Campbellsville University when she was diagnosed with COVID-19.

In November 2020, Cope was admitted to the hospital the day before Thanksgiving and was on a ventilator for almost two months.

She had a tracheotomy, where they make an incision in the throat to make breathing easier, instead of intubating, where they put a tube down the throat. Cope said she has not heard of many people who have lived after being on a ventilator for so long.

“Most of the people I have heard of have passed away,” said Cope. “I am really lucky.”

She was at Baptist Health Deaconess Madisonville for the first month, but was transferred to a hospital in Evansville, Indiana for the second month, which is where she was taken off the ventilator.

Because Cope was on the ventilator for almost two months, she did have some after-effects that needed to be taken care of. She had to have a cardioversion done to correct a fast-beating heart, and she had to enter rehabilitation in February 2021 for some numbness in her left arm and right foot.

“I couldn’t use my left arm,” said Cope. “I didn’t know it was there for a while. I would tell my husband, ‘Look, I’m moving it.’ I thought I was. It wasn’t going anywhere.”

Her right foot is numb for the most part, and she can feel a little bit but has to wear a brace because her muscle is not built up from lack of use for over two months.

“I walk with a walker or a cane because I get off balance because I can’t feel my foot, obviously,” said Cope. “I do drive, but I use hand controls that are attached to my pedals.”

She just started being able to drive in the last eight months. She still coughs constantly, is tired most of the time, and it takes a lot of energy to do almost anything.

“It took me a while to get back to where I could even walk,” said Cope.

Once she started showing improvement in rehabilitation, she was able to come home to Madisonville in March 2021.

Cope was already working on a degree in social work when she got sick with COVID-19. She was supposed to have finished in spring 2021 but was still in the hospital, so she didn’t get to.

After showing improvement and moving back home, she decided she wanted to finish her degree, so she re-enrolled in her classes.

“The school worked with me,” said Cope. “They put my classes on hold so I could finish them when I got better. They would call my husband and check on me every month to see how I was doing.”

With only two semesters left to finish her degree, Cope said she was going to finish what she started because it is what she wants to do.

As part of her degree, she had to get an internship, so she asked around Madisonville and started in January 2022 at Mountain Comprehensive. She told her supervisors at Mountain Comp about her issues in dealing with long-COVID when she applied for the job.

“These ladies have been really sweet,” said Cope. “They are fine if I have to be out for appointments.”

Kara Cardwell, TRP supervisor at Mountain Comp, said despite the challenges Cope has faced, she has always been at work and had a positive attitude.

“She has just been a pleasure to have as an intern, and we have had interns every semester,” she said.

“A lot of people would have just stayed home and drawn disability and say forget it this is my life,” she said. “She didn’t do that. She wanted to get a degree, and she wants to have a career.”

Cope said what she has gone through, and is still going through trying to get back to her normal, it has changed the way she looks at life.

“Now I try to do things when I can. I won’t plan things to do later because you never know,” she said. “For school, I feel like I know more personally how things are and what people might need if they have issues like this.”

Hober said she feels what Cope has gone through will help her relate to others who are going through similar challenges.

“The challenges she has overcome have been extremely inspiring to us and the clients,” she said.

Cope said she does have bad days, but she tries not to dwell on them. She has a great support system at home from her husband and her family.

“I take it one day at a time. Everything is slow,” said Cope. “If I can get some improvement every so often, that makes me happy.”

Cope graduated with her Bachelor’s in Social Work on May 7. Despite all the challenges facing her, she still followed her path to being a social worker.

“It has been difficult but I have figured it out because I wanted to do it,” she said. “I think it is getting better, and me getting up and doing stuff and coming here and finishing school has helped a whole lot more than just sitting at home.”