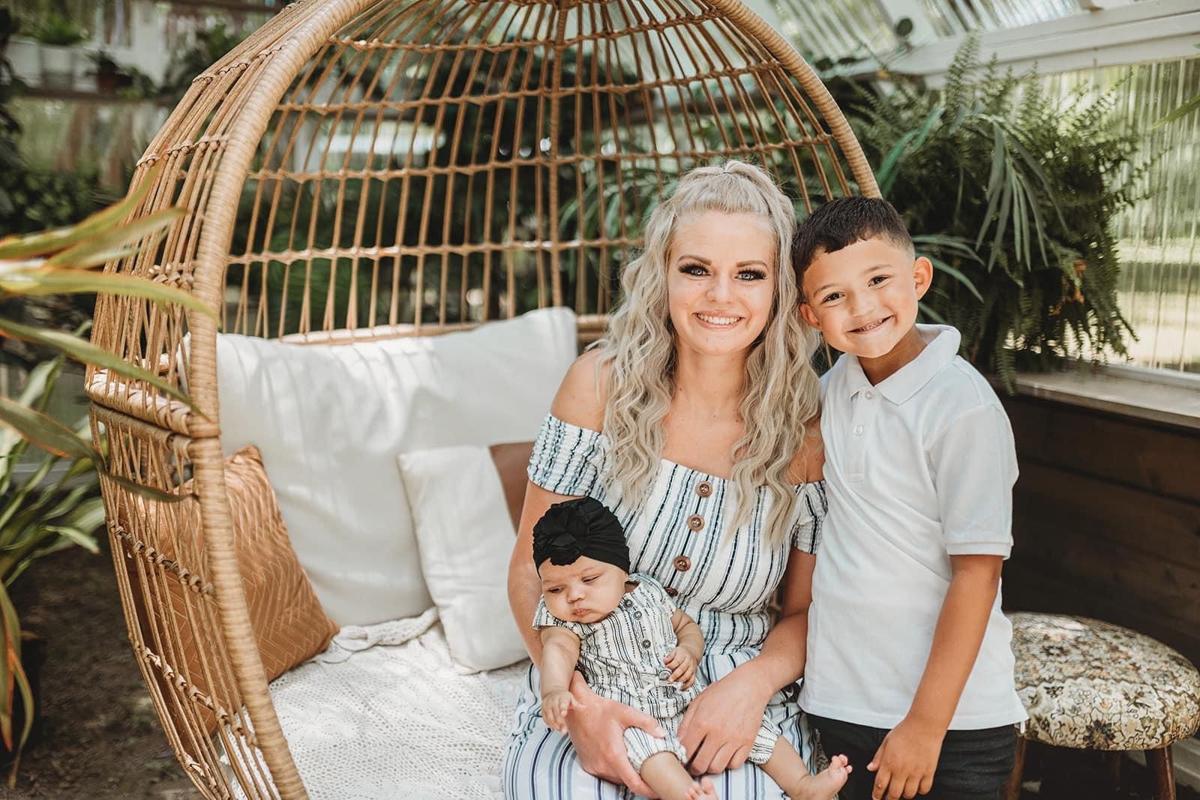 Aniya Brooke Johnson is held by her mother, Aubrianna Brown, in a family portrait with her brother, Jay’ston White, 5. Aniya has been diagnosed with retinoblastoma in both eyes and is the recipient of money from a fund established in the early 1990s by a family with Hopkins County ties. 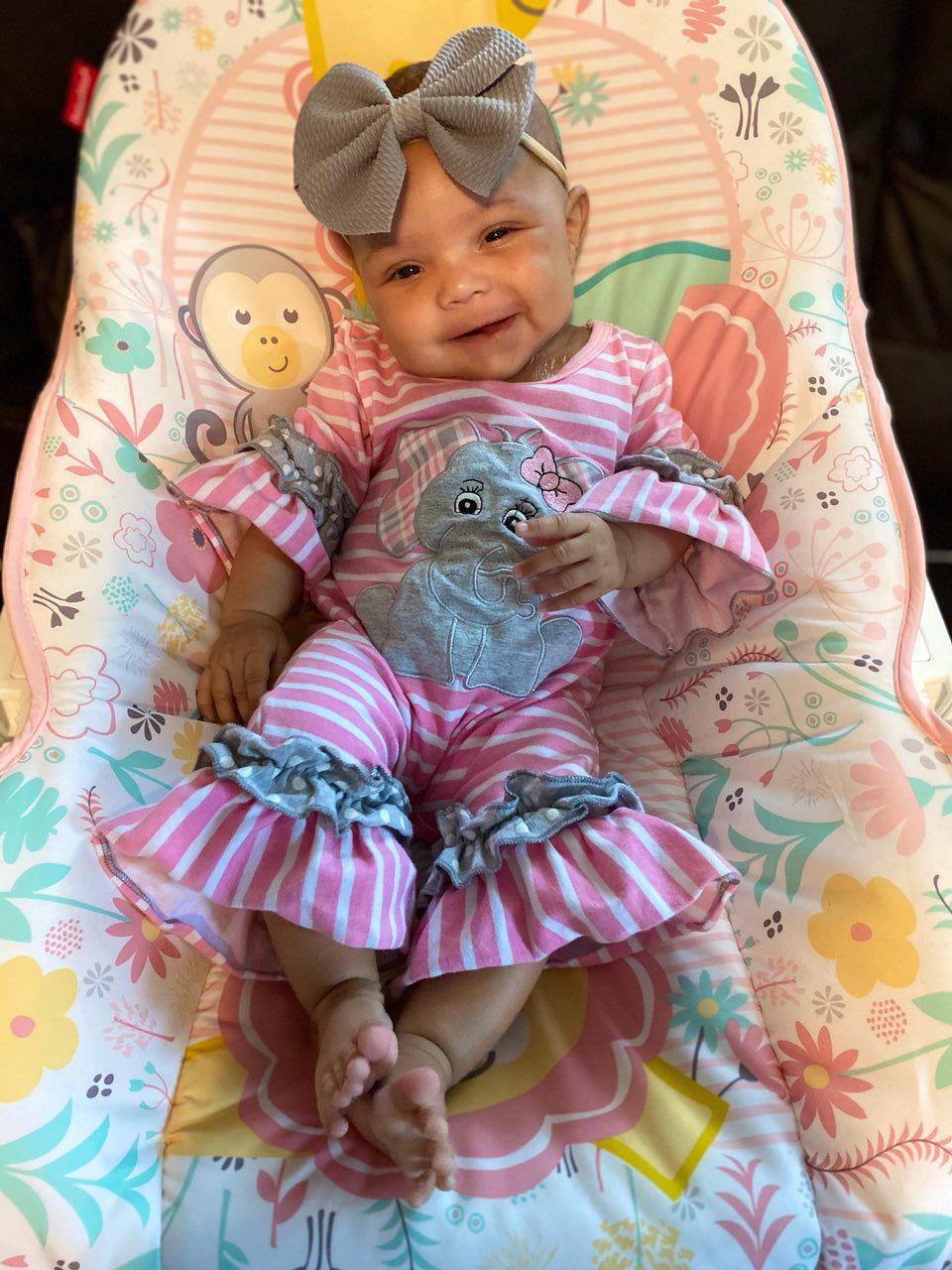 Aniya Brooke Johnson smiles for the camera. She will have to undergo cryotherapy and chemotherapy to fight the tumors behind her eyes.

Aniya Brooke Johnson is held by her mother, Aubrianna Brown, in a family portrait with her brother, Jay’ston White, 5. Aniya has been diagnosed with retinoblastoma in both eyes and is the recipient of money from a fund established in the early 1990s by a family with Hopkins County ties.

Aniya Brooke Johnson smiles for the camera. She will have to undergo cryotherapy and chemotherapy to fight the tumors behind her eyes.

In the blink of a camera’s flash, the world changed for Aniya Brooke Johnson and her family.

Aniya’s mother Aubrianna Brown, Madisonville, took a picture of her infant daughter with the flash on. Looking at the screen, Brown and her cousin noticed that one of Aniya’s eyes appeared to have “red eye” and the other was clear.

“I contacted her pediatrician the next morning and she gladly referred me to a pediatric ophthalmologist in Louisville,” Brown said. “Me and her father (Shaquille Johnson) were sure nothing was really wrong with her until we had to sit in the eye exam room for quite some time while they did some tests on her. I knew then something had to be up from how much time had passed with us being there.”

On May 1, Aniya was diagnosed with double retinoblastoma, a rare form of cancer in the retina of the eye. She has tumors behind both eyes. The mass in her right eye is larger than the one on the left side.

A week later, on the day Brown was supposed to graduate from Madisonville Community College with a degree in radiography, the duo were in Arizona awaiting Aniya’s first cryotherapy treatment.

The plan was that Aniya would undergo laser freezing treatments with a specialist in Arizona and chemotherapy once a month for five months in Louisville. The prognosis was that the tumors would be gone by the treatment’s end.

“We’re hoping for a full recovery by the end of the year,” Brown said.

Community members have stepped in to host fundraisers for Aniya and to show their support for the child. Brown is selling $5 bracelets that read “Aniya’s Army. Her fight is our fight.” A family friend started a GoFundMe page, which has raised $950 so far. Brown, who is also a mother to a 5-year-old boy, Jay’ston White, was surprised with a drive-by parade for Aniya. Her classmates and instructor hosted the parade and had a fundraiser as well. Aniya also has a 2-year-old brother and 9-year-old sister.

“There’s nothing we really are in need of,” Brown said. “We just ask for continued prayers for our girl. Even a word of advice from the parents that have been through this before have seemed to help out a lot.”

Thirty years ago, on Aug. 11, 1990, Kathy and Steve Moore, Hopkins County natives, had a baby girl named Amanda Jo Moore, according to articles in the archives of The Messenger.

Mandy was born early, diagnosed with necrotizing enterocolitis — an intestinal disease that typically affects premature babies — and needed a dual transplant of her intestines and kidneys.

At the time, the transplant was considered experimental and expensive.

With the Moores’ close ties to Hopkins County — Kathy is from White Plains and Steve is from Mortons Gap — Hopkins Countians stepped it up. Fundraisers were had and money was raised as part of the “Miracle for Mandy” campaign. A disclaimer was that if the money could not be used for the transplant, it would be used instead to help other children in Hopkins County and in Nashville, where the Moores live.

The community raised about $300,000, according to past articles. The money was put into a fund.

In addition, there is The Mandy Moore Foundation at St. Thomas Hospital in Nashville. That fund is strictly used to help those in the neonatal intensive care unit at the hospital. For example, Kathy Moore said the foundation purchased two kangaroo chairs to allow parents to bond with their children, who are hooked up to machines. She added that people she knows have used those chairs while their child was in the hospital. That foundation is an ongoing fund that will help patients and their parents for decades.

Mandy never received the transplant. She died on Aug. 2, 1992, a little more than a week before her 2nd birthday. She is buried in Old Salem Cemetery in Mortons Gap.

The fund with the money raised by Hopkins County in the early 1990s has been used over the years to pay for experimental treatments for a child with a rare form of asthma, travel expenses for the family of a White Plains cancer patient and a bone marrow and liver transplant for a young Nashville man. Pam Stone, who was the Nortonville correspondent for The Messenger in 2000, said she was the recipient of some of the money to help with her own medical bills.

The money is now being used to help Aniya fight her eye disease. Kathy Moore said she and her husband looked at a GoFundMe page for Aniya after hearing about the case from relatives in the area. The Moores decided the last of their fund would go to help Aniya.

“They were so generous to do what they did,” Brown said. “We were shocked and very grateful for their contribution. After learning a bit about the Mandy Moore Foundation, I thought it was such an amazing thing that 30 years later her legacy is still going on, helping other kids that are sick. It’s almost like she’s in spirit helping heal and bless others.”

Mandy didn’t get the miracle she needed, but maybe Aniya will.