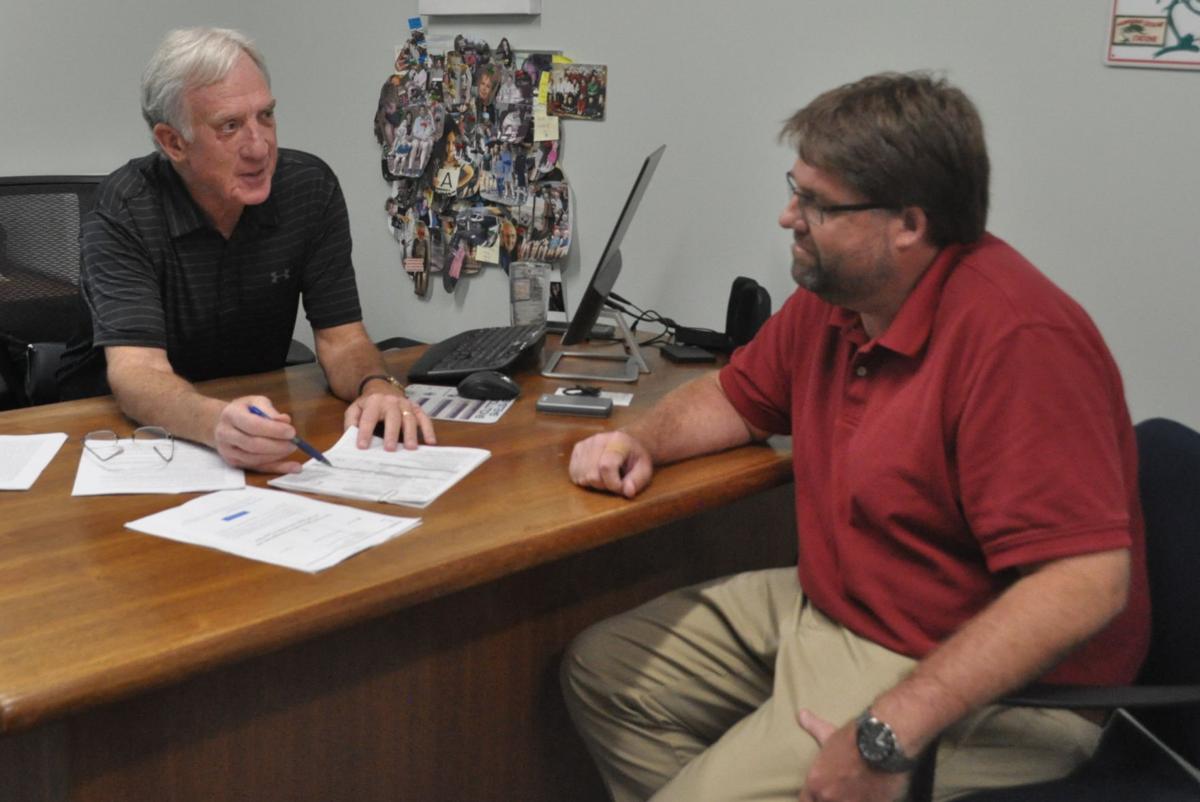 Barry Eveland, left, goes over some documents with his son and business partner, Tom Eveland, at the desk Barry’s grandfather used at his petroleum company. 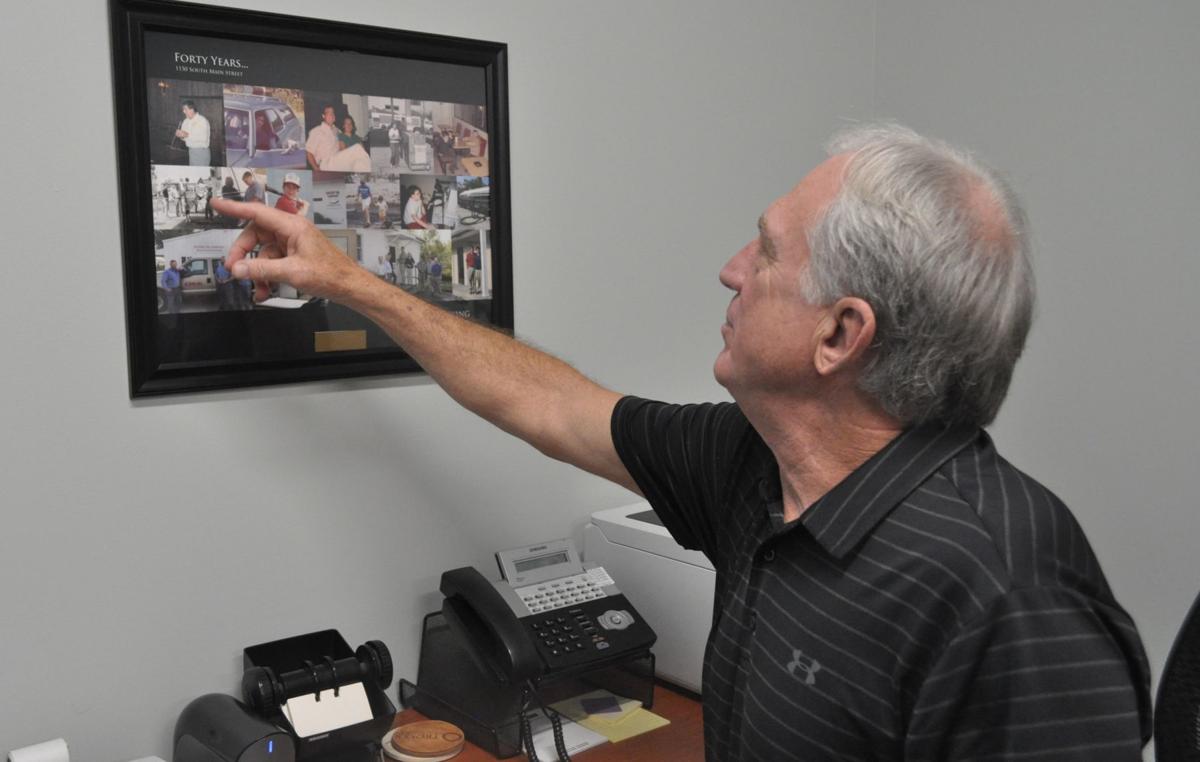 Barry Eveland looks back at photos from his years running Rocket Oil Company, which started in 1974. 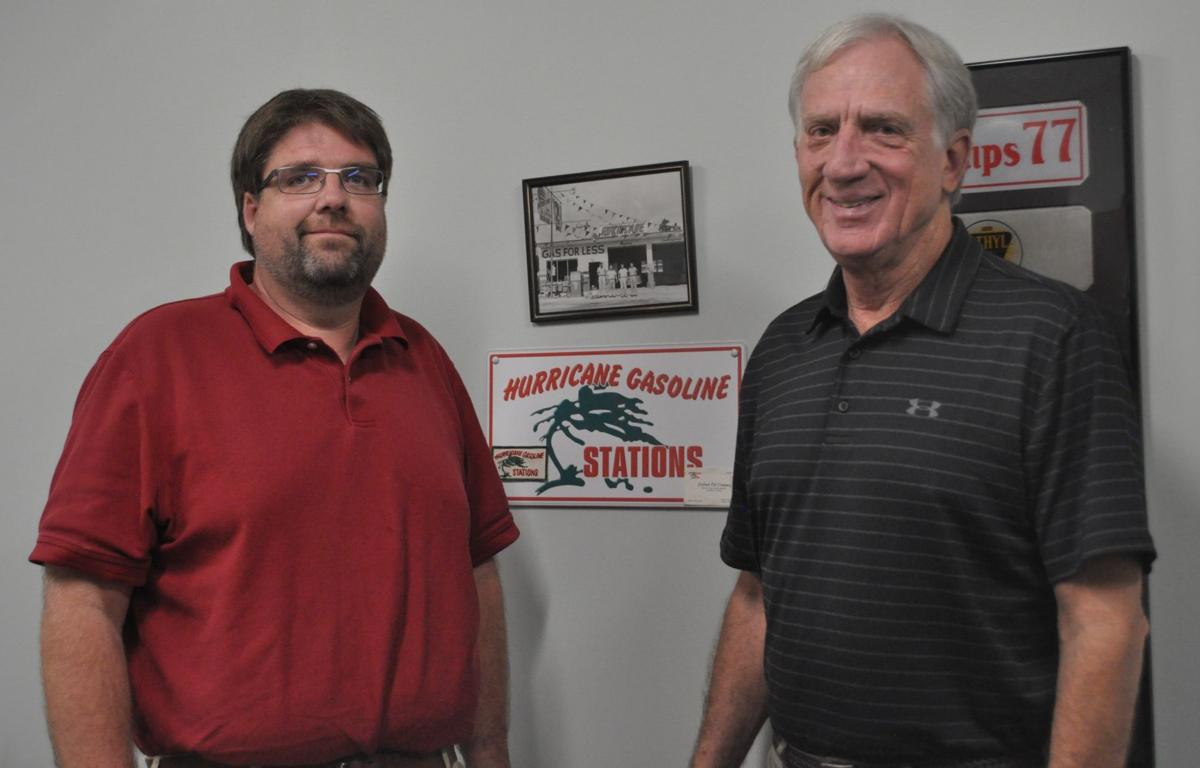 Tom Eveland, left, stands next to his father and business partner, Barry Eveland, by the logo and business Barry’s father had in Florida.

Barry Eveland, left, goes over some documents with his son and business partner, Tom Eveland, at the desk Barry’s grandfather used at his petroleum company.

Barry Eveland looks back at photos from his years running Rocket Oil Company, which started in 1974.

Tom Eveland, left, stands next to his father and business partner, Barry Eveland, by the logo and business Barry’s father had in Florida.

Fathers play an important role when children are growing up, and that relationship can grow into a working relationship when family businesses are brought into the mix.

Tom Eveland and his father, Barry Eveland, both grew up in the petroleum industry, but they had different experiences working with their fathers.

While Barry’s father lived in another state and only came to visit every couple of weeks, Tom and Barry have offices across the hall from each other.

“He has been awesome,” said Tom. “Every day is fun. Every day has been a treat to work with my father.”

Barry said his father, Vern Eveland, actually married the daughter of a Phillips Petroleum executive in Orlando, Florida, which is how Vern got into the gas station business.

Vern eventually started his own business, Hurricane Gasoline Stations, in Orlando, and in 1972, he bought a chain of gas stations in Madisonville from Curtis McCoy. In 1974, Barry moved to Madisonville to run the Rocket Oil Company gas stations.

Barry said his father offered him the chance to run the gas stations after he graduated from Florida State.

“I was a recent graduate, and I didn’t have anything particular on my mind until he offered me the job,” he said. “I didn’t know that I was going to do it.”

Barry said shortly after moving to Madisonville, he met a girl with who he would later marry and have four children.

Tom said his entrance into the business was similar to his father’s. While Tom and his siblings grew up working at the office, he never really considered it a career until after he had graduated college and his father brought it up.

“He said, ‘What do you think about moving back?’ ” said Tom. “It was in the back of my mind. It was intriguing to me, but the offer hadn’t been made, and I wasn’t eager to jump and say I’m coming back.”

Tom said he grew up being the office janitor or would pump gas for customers.

“All through high school, middle school and elementary school I worked here,” he said.

Barry said his father never moved to Kentucky, but stayed in Florida in the house Barry grew up in. He would visit every few weeks to check in on things, but after a while, he didn’t visit as much.

“I was here working without him,” said Barry. “We never did work side-by-side. I did not have that sort of experience, and as time went by he came up less and less.”

Tom’s experience working in the company has been completely different.

“Dad has been hands-on,” he said. “He is always present, always helpful, and always available.”

Barry said before Tom became involved in the company to the extent he is now, Barry would eat lunch at his desk usually. Now, if Tom goes out to lunch Barry is right there with him.

“Occasionally, Tom will go out to lunch, and I will hop in the front seat with him and go,” said Barry. “I am trying to do more and more of that because I know it is a precious time.”

While Tom is a partner in the business, he and his father try not to let it interfere with the rest of their family, especially when they are all together and having fun.

“I think we probably try to avoid spending hours in the corner while the family is playing,” said Barry.

When Tom did start working at Rocket Oil Company, Barry said they set some ground rules, so they would not talk business when Tom came to visit.

“That lasted for a brief period of time,” he said. “If you are a small business owner, you are immersed in it, you think about it all the time.”

While he has tried not to let the business affect his home life, especially when his sons were growing up, Barry said he knows it still got in the way sometimes.

He said a family story that gets told is when they would go on vacations as a family, they would have to stop at every payphone so he could check-in.

“When we went on vacation, we would drive from one payphone to the next,” said Barry.

He also said that his children’s first cars were worn-out company cars that he brought home.

Even though Barry’s wife, Gail, has never worked at the company, she is still an integral part of the business.

“She is a very good sounding board. I don’t make any decisions without talking to her because she has such good common sense and knowledge,” he said.

Barry said family has always been important to him, and he wanted his children to follow their dreams, even if it meant that dream was not Rocket Oil.

“My thought as I was coming up and raising children was I want them to feel like this is their calling,” he said.

Tom agreed to say that if his two children want to someday work in the business, then that would be great, but he will not force them.

“It is what I enjoy doing right now, but my kids may not,” he said.