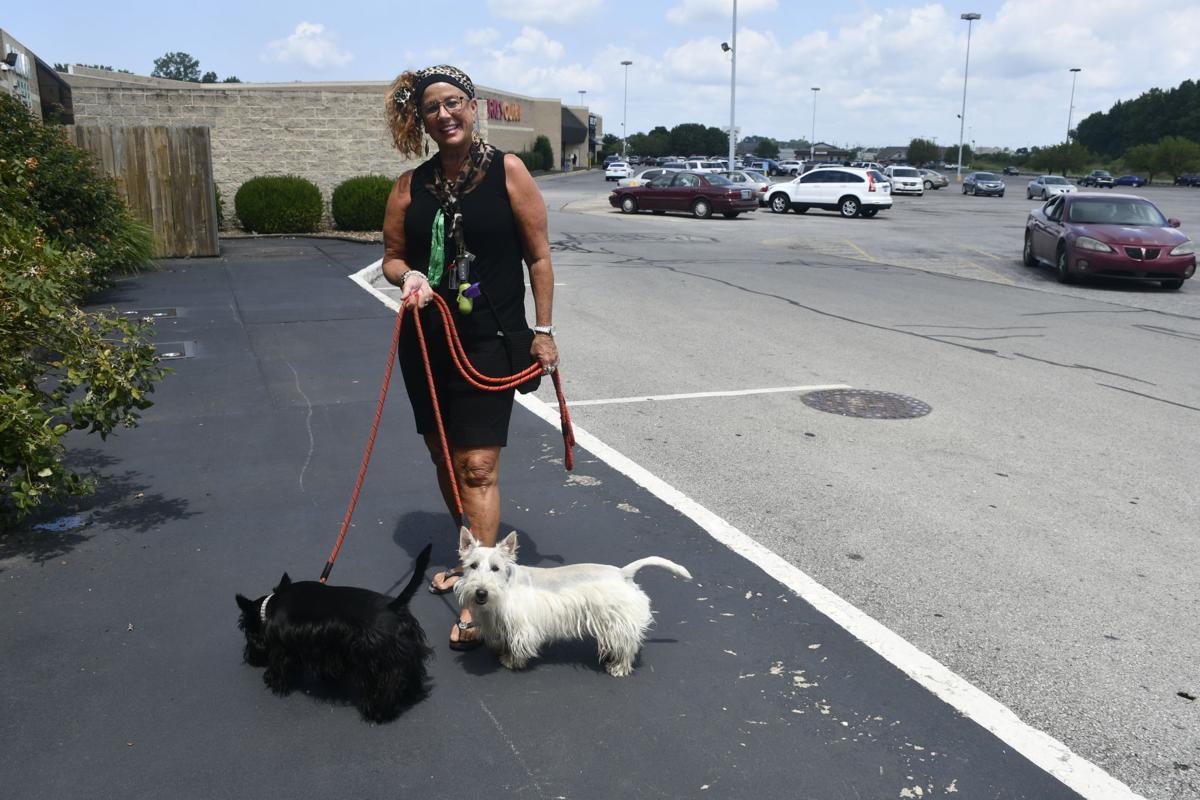 Susan Clapp, a frequent jogger, has walked around the mall’s exterior in her daily exercise routine for three years now. Many residents use the mall area for exercise routes — both inside and outside. 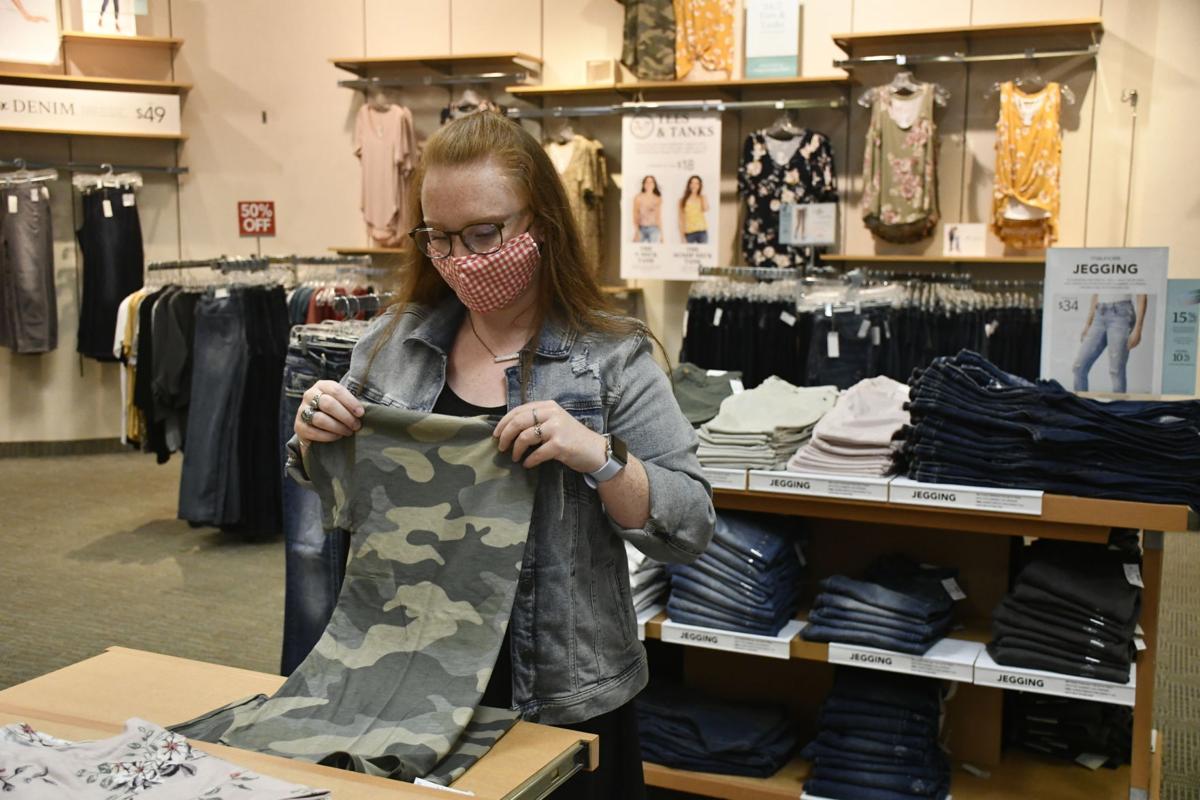 Kaeli Gilkey has worked at Maurices for approximately one year. All staff are required to wear a face mask in the store during and outside of operating hours, Gilkey said. 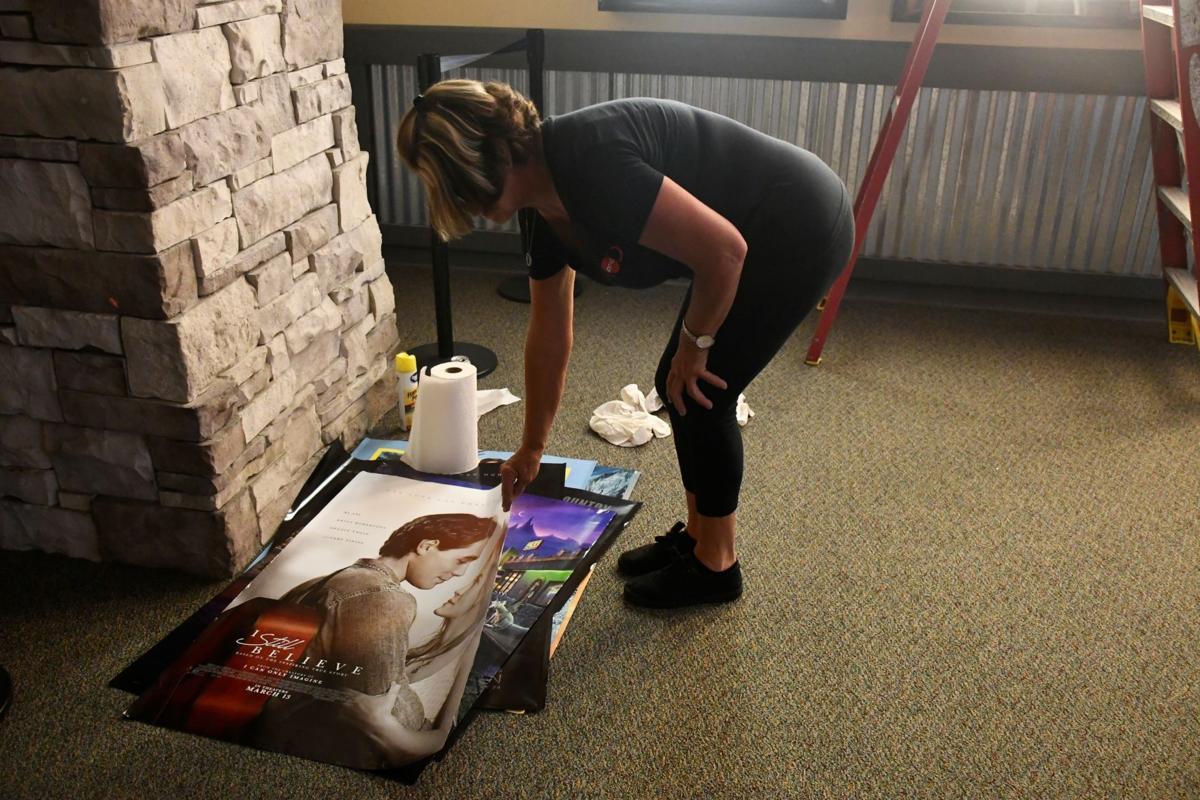 AMC General Manager Carla Thomas takes down movie posters hanging on the wall outside the theater. According to AMC’s website, the date of reopening is still yet to be determined.

Susan Clapp, a frequent jogger, has walked around the mall’s exterior in her daily exercise routine for three years now. Many residents use the mall area for exercise routes — both inside and outside.

Kaeli Gilkey has worked at Maurices for approximately one year. All staff are required to wear a face mask in the store during and outside of operating hours, Gilkey said.

AMC General Manager Carla Thomas takes down movie posters hanging on the wall outside the theater. According to AMC’s website, the date of reopening is still yet to be determined.

Local vendors are leaning on community support as Madisonville tries to return to business as usual amidst the COVID-19 pandemic.

Various stores and patrons report steady foot traffic at the Parkway Plaza Mall, but the turnout has lessened considerably since several stores reopened in May.

“When the mall was shut down, there were zero cars here,” Susan Clapp, a frequent jogger around the mall area, said. “Now shops are back open, there’s been some traffic. It’s been building up, but it’s nowhere near what it was.”

While many stores have reopened, some have closed completely or their reopening dates are still in limbo.

During Gov. Andy Beshear’s mandatory non-essential business closures during the COVID-19 pandemic, Tumbleweed’s location inside the mall closed permanently. The arcade section of the mall is also closed for now and remains restricted from use.

The AMC Theatres location is also still closed, and its reopening date is to be determined. Tommy D’z Classic Diner reopens today at noon, according to signage posted at the storefront.

Despite several closures still in place at the outlet mall, many retail stores, such as Bath & Body Works, Gordmans and Maurices, have reopened at the location.

According to staff at Maurices, the initial turnout for the mall’s reopening was overwhelmingly positive, but traffic has slowed as time continues.

“When we first reopened, people were excited to see us and come here. Now it’s been kind of slow because people are going back to work and starting their lives back up again,” Maurices employee Kaeli Gilkey said.

According to Gilkey, her store is also at a disadvantage because businesses such as AMC Theater and Tumbleweed, which typically draw patrons inside the building, have been closed.

Salon 222 has also experienced a slight decrease since the outlet store reopened, according to co-owner Meisha Jackson.

“We were really busy then, and now it’s steady,” Jackson said.

According to Jackson, one reason behind the slower traffic is the salon now only accepts patrons on an appointment-only basis rather than also servicing walk-ins.

Stores in the outlet mall continue to prioritize the safety of its patrons following their reopenings, according to several employees.

According to Gilkey, Maurices has taken several steps to ensure safety for its patrons. Disposable masks are available at the door, and all high-touch areas are consistently sanitized throughout the day.

Maurices dressing rooms are also open, which is uncommon for many other retail stores, Gilkey said. After each use by a patron, employees thoroughly disinfect the area. Restrooms are also sanitized after each use.

To ensure patron safety, Salon 222’s clients must complete a COVID-19 form and have their temperatures taken prior to entering the store.

Clapp, who visits the mall’s exterior daily to exercise, said she has felt no worries for her own health in the area. She said she and the other joggers always remain a safe distance from each other during their routines.

According to Clapp, the mall’s reopening has even helped several elderly citizens who use the area for exercise. Now that the building’s interior is open, many senior citizens are able to walk more comfortably inside rather than braving weather conditions in the exterior.

As Madisonville’s local economy attempts to bounce back following several challenges posed by COVID-19, the Hopkins County Regional Chamber of Commerce has created some initiatives aimed to strengthen the relationship between local consumers and vendors, according to President Libby Spencer.

One initiative that several outlet stores in the mall are a part of, such as Gordmans and Rogers Jewelers, is the Chamber Check Program.

The program works like a gift card to any local business that is a member of the chamber of commerce, Spencer said. Citizens can purchase a chamber check for any amount at the county’s chamber of commerce in order to spend the check, in place of cash, at several businesses in the community.

“I think it’s a great way just to keep (spending) local. If you have pocket change, you could potentially use that in a business that’s not in Madisonville,” Spencer said. “But with the chamber check, it truly keeps all of that money in Hopkins County and flowing through our economy.”

According to Spencer, the Chamber has sold approximately $35,000 worth of chamber checks during the COVID-19 pandemic.

The chamber will also soon host a small business roundtable to expand on how vendors can support each other during this time of uncertainty.

The pandemic has also exposed minor issues within the Chamber’s membership program, which organizers are quick to rectify.

“We had been working on our strategic plan, and I think this has really given us an opportunity to look at what we do well and also look at things that we can improve upon,” Spencer said. “I think COVID-19 certainly is helping us reevaluate and to provide better benefits to our members.”

For example, the Chamber intends to help solve issues with health and unemployment insurance for their members, Spencer said.

While vendors continue to find new ways to support one another, community support is still necessary to re-stimulate the economy, Spencer said.

According to Spencer, patrons should respect the health and safety regulations of each business if they wish “to keep the doors open of our small businesses.”

If a local business does not have face masks or related PPE at this disposal, the Chamber can provide them for a nominal price. Chamber members will receive a discount, but all vendors are able to make the purchase.