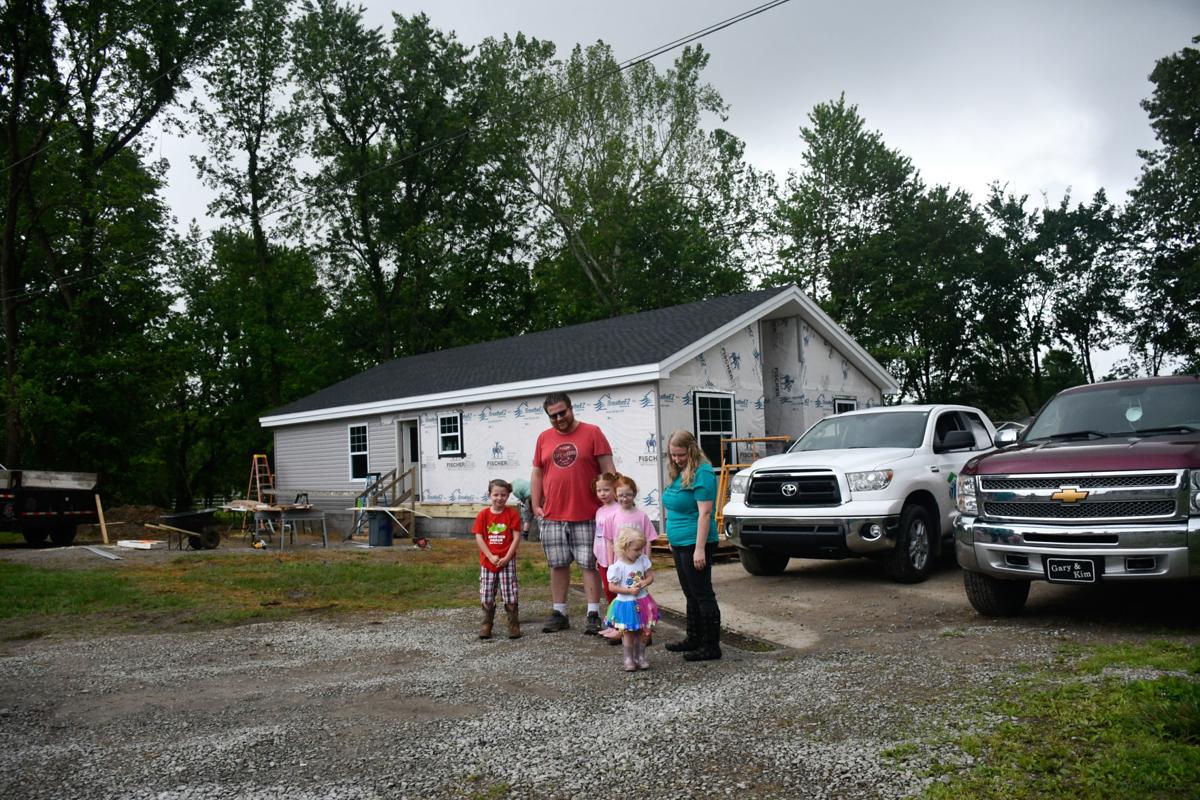 The Burrow family, from left, Noah, Anthony, Oliviah, Mary Hannah, Judah and Kara, huddled together for a photo outside their new home. Construction at the Mortons Gap home is currently on schedule and should be completed by the end of June. 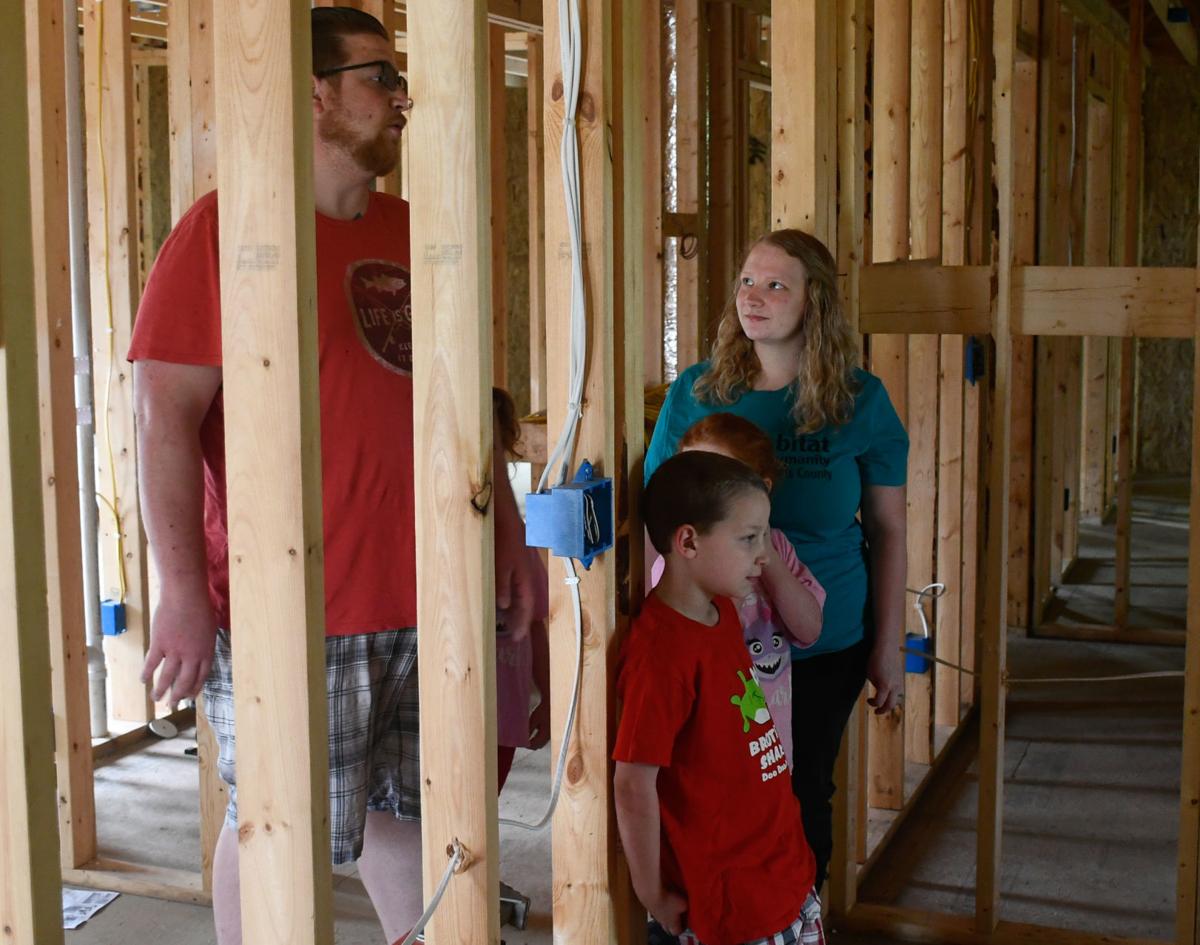 Anthony Burrow, left, along with his wife, Kara, and their children, stood in their house Wednesday. The Burrow house will be the first completion after Habitat’s merger with Webster and Christian counties under its new name, Habitat for Humanity Pennyrile Region.

The Burrow family, from left, Noah, Anthony, Oliviah, Mary Hannah, Judah and Kara, huddled together for a photo outside their new home. Construction at the Mortons Gap home is currently on schedule and should be completed by the end of June.

Anthony Burrow, left, along with his wife, Kara, and their children, stood in their house Wednesday. The Burrow house will be the first completion after Habitat’s merger with Webster and Christian counties under its new name, Habitat for Humanity Pennyrile Region.

In a deal that has taken a year to finalize, Executive Director Heath Duncan said this merger is a testament to the hard work and support the organization has had in Hopkins County.

“We’ve made a name for ourselves, and that is in large part due to the citizens of Hopkins County,” he said. “We’ve had a wonderful amount of community support, and that hasn’t gone unnoticed. That makes us poised to be a regional force in the affordable housing world.”

Typically, Habitat is set up by county in different service areas. As organizations grow, they experience growing pains.

“In an effort to be more efficient, so we can serve more families, merging makes sense,” said Duncan. “Sometimes, service areas aren’t able to meet the minimum standards set forth by Habitat International, and in this case, this merger is both a merger and an expansion.”

Webster County doesn’t have a Habitat affiliate so they are expanding to that service area, while Christian County does have a branch, but was having a hard time growing their ministry, according to Duncan.

“They were all volunteers, and they had done a lot of really good things but wanted to be able to grow their ministry there,” he said. “In order to do that, they needed some admin help, and that’s where we came in. They came to us and asked if we would be willing to merge with them and help them grow.”

Hopkins County’s Habitat has been around for the last 30 years and averages building four to six homes a year. With the merger, Duncan said they hope to expand to build eight to 10 houses a year.

Duncan said the merger began last year, and because each Habitat affiliate also acts as a bank that holds mortgage and real estate assets, they have taken the time to merge all of the data.

“Merging all of that stuff and doing our due diligence first to make sure it makes sense, and that both organizations are healthy was important,” he said. “At the tail end of the merger came the pandemic. It allowed us an opportunity to focus on the final details of the merger — consolidating assets, we’ve got a lot of mortgage transfers, and in some ways, the pandemic helped us. We were able to have some focused energy on getting across the finish line.”

Right now, the company is limited to using professional contractors who were deemed essential workers.

“The work that we have had done has been without volunteers, and we hope to open it back up, we postponed all of our spring activity,” Duncan said. “I hope to get it back in the fall, but we just have to wait and see how this all plays out.”

The first home to be built under the new moniker is under construction in Mortons Gap. The Burrow family is excited about their new home. Anthony Burrow, a veteran, said after living on military bases for years along with paying rent, he is looking forward to being able to have a place to watch his kids grow.

“The eight years that I was married in the army, we spent over $100,000 on housing, on renting, and we have nothing to show for it, it’s gone,” he said. “Owing my own house was definitely the way to go, and that’s where this comes in for me. My kids will have their space, my son will have his own room, the two younger daughters will share a room, and then my two older daughters will have their own rooms.”

Burrow said owning the home through Habitat is affordable.

Duncan said the Burrow’s house is different, not just because it’s being built without volunteers, but because of some of the partnerships that are taking place within the home.

“We’re partnering with Kentucky Habitat for Humanity, which is a support organization for all the affiliates in the state, the Kentucky Department of Energy, provided through grants training on SIP, which is Structurally Insulated Panels,” he said. “We are building the first SIP house in the state.”

Not only is the house energy efficient with SIP, but Habitat has invested through donations in LG&E and KU, which has a solar farm. Duncan likens the farm to a field of solar panels. Eventually, KU will put a smart meter on the Burrow’s house and connect them to the solar farm.

“They’re going to have solar power on their house for free, basically, because they’re not going to have to pay for the credits, Kentucky Habitat did that for us,” he said.

Kentucky Habitat was also able to acquire $15,000 from the Home Depot Foundation, which set aside money for veterans which will be used on the new construction.

Another partnership Duncan said the house has is with Green River Correctional Complex, which has inmates build storage shed’s for each Habitat home. Mortons Gap has been helpful with water and sewer hookups, said Duncan. The Vineyard Worship Center has also been kind in letting the construction crews park on their lot next to the Burrow’s home.

Burrow, who works at the Hopkins County Jail, said he’s been talking about owning a Habitat Home with his coworkers.

“At my work, I’m trying to tell people who think it’s like a pop-up house; they have to come and see, and when looking at it, they’re all interested,” he said.

Habitat is looking for applicants from the Pennyrile region that qualify for their affordable housing. If interested in applying, visit their website or facebook page for more information.

“We’re eager to get back to work,” Duncan said.