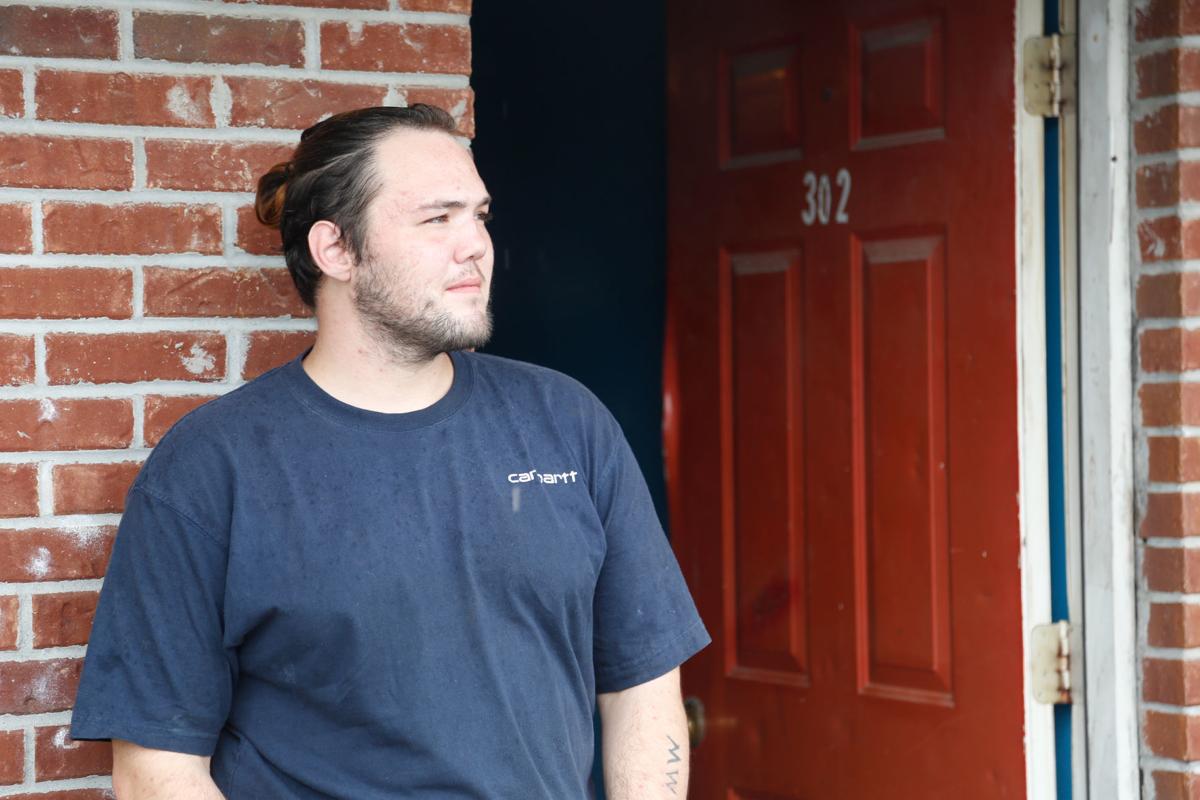 Red Cardinal Inn resident Jeffrey Westby stood outside the apartment he may be forced to leave in the next couple of weeks as Madisonville city officials have begun the condemnation process for the Hanson Road property.

Madisonville city officials condemned the Red Cardinal Inn near Hanson earlier this week. Building inspector Frank Wallace has deemed the structure unsafe for occupancy. According to a letter posted on the front of the building, the inn has 30 days to submit plans for the renovations and repairs needed to bring it up to code.

Red Cardinal Inn resident Jeffrey Westby stood outside the apartment he may be forced to leave in the next couple of weeks as Madisonville city officials have begun the condemnation process for the Hanson Road property.

Madisonville city officials condemned the Red Cardinal Inn near Hanson earlier this week. Building inspector Frank Wallace has deemed the structure unsafe for occupancy. According to a letter posted on the front of the building, the inn has 30 days to submit plans for the renovations and repairs needed to bring it up to code.

The Red Cardinal Inn has been condemned by the city of Madisonville because the building is “unfit for occupancy,” according to city officials.

Approximately 40 tenants of the motel — at 4765 Hanson Road — are expected to be displaced while the city works with management to host an inspection of the building for possible repair efforts.

There are no immediate plans of demolition or permanent closure at this time, Madisonville Building Inspector Frank Wallace said. In addition, Wallace said the city is willing to work with management of the property to ensure enough time is given to find residents other living arrangements. He said the 14-day notice is a starting point to begin the process of much-needed repairs to the property.

On June 23, the inn’s management and tenants were given the notice of evacuation of the building. According to Wallace, vacancy of the building is required for a proper inspection.

If the building is deemed repairable, management will be given an itemized list of repairs to be completed and tenants will be able to move back in once those issues are addressed. If the building is found to be insecure, city officials will take further action by either obtaining an order of demolition or going through the court system, Wallace said.

The timeline of the inspection has not yet been determined.

According to a Red Cardinal Inn manager, the condemnation was unexpected and has placed several tenants at an economic disadvantage.

The manager, who wished to remain anonymous, said the motel — which serves mostly as a long-term place of residence — has always been cooperative with health and safety inspections.

In mid-2019, the Madisonville Fire Department sent an itemized list of repairs that needed to be completed after an inspection. Management said those repairs were completed soon after, and the fire department confirmed the repairs had taken place in July 2019. A health inspection was also conducted in December 2019 where the inn received a 94 out of 100.

“We have never not complied with any inspection that we’ve had. We’ve always corrected the problem(s),” the manager said.

In the manager’s 15 years of work experience at the inn, this is the first time that an inspection has warranted tenants being forced to vacate the property. The manager said she was not given specific details on why the condemnation had taken place, but she was informed that there had been complaints to the city.

According to the manager, the only main complaint she has received was an incorrect assertion that tenants were without water for two months. The tenants were really only without hot water for 10 days, which was soon corrected. Additional tenants have confirmed this was the case.

The manager has also heard a complaint that the swimming pool should be drained of rainwater, which she has committed to do.

When the manager received the 14-day notice, she said she cried. She immediately contacted Wallace to understand what repairs needed to be completed. The manager felt assured by Wallace that the city was willing to work with management until she watched a report about the condemnation on a local news station.

Since the vacancy notice and news, employees and tenants have felt heartbroken, confused and terrified, said the manager.

If the vacancy date is not pushed back, many tenants expect to become homeless.

“Most of these families have nowhere to go,” the manager said. “There are people with children here. Not only that, some of them are out of work because of COVID-19. I don’t see how (the city) can only give them 14 days to leave.”

When tenants April and Jeffrey Westby saw the 14-day vacancy notice posted on their door, the mother and son broke down into tears.

Westby and his mother have lived at the Red Cardinal Inn for a little over a year. According to Westby, the inn has provided a safe and affordable place to live.

Efforts to find another place of residency — either temporarily or permanently — in 14 days is not possible based on their family’s income, he said. Like many other tenants, Westby’s mother was briefly laid off following the COVID-19 shutdown. While both Jeffrey and April Westby are working nearly every single day, their mutual income is not enough to cover other apartment complex’s necessities such as a deposit and utilities payment.

“We barely have enough money for rent,” Westby said. “Most places around town are asking for first and last month’s deposit.”

If Westby and his mother become homeless, it will have a rippling effect on their lives.

Since both of the Westbys work at a restaurant, their employment could be placed in danger if they don’t have access to bathing facilities for sanitary needs, they said. April also has medication that needs to be taken everyday with food, which is also placed at risk if their employment is terminated.

Tenant Patricia Noeth, who is on disability and partially wheelchair-bound, has lived at the Red Cardinal Inn since January 2020. According to Noeth, she does not have the financial security to find another place of residency in the 14 days allotted to her.

“Me and several others around here, we’re going to be homeless — just out on the streets,” Noeth said.

According to Noeth, there are tenants that do not have access to even a vehicle for temporary refuge. One resident is on an oxygen tank and can barely walk without assistance.

Many feel the situation is exacerbated by the COVID-19 pandemic, which has impacted the economic security of several tenants.

“There’s some people out here that just started back to work,” Noeth said. “And they haven’t really had a chance to save any money towards getting another place.”

Westby expressed fears over the health and safety of the community.

“If we have nowhere to go, then that’s putting us at risk,” Westby said. “That’s putting our health at risk because of COVID-19 — not only us but to other people in the community.”

Multiple calls about an extension have been made to the city, according to Westby, Noeth, and the inn’s manager. No calls have been returned, they said.

According to Wallace, the city is willing to work with management for an extension on the tenant vacancy date. City officials encourage tenants to reach out to management if they are not able to find additional housing by the date of vacancy. Red Cardinal Inn management can then contact the city directly about an extension.

The Red Cardinal Inn’s manager has also expressed disturbance at the social media reaction to the condemnation.

“People think this is a bad place but it’s not what it used to be,” the manager said. “There are families living here now with their children.”

Westby said he hopes displaced families will have community support at this time.

“We are not bad people. We are a family. We’re friends and we help each other out as best we can,” Westby said. “For anyone to help (or) lend a hand, it would be very, very much appreciated.”