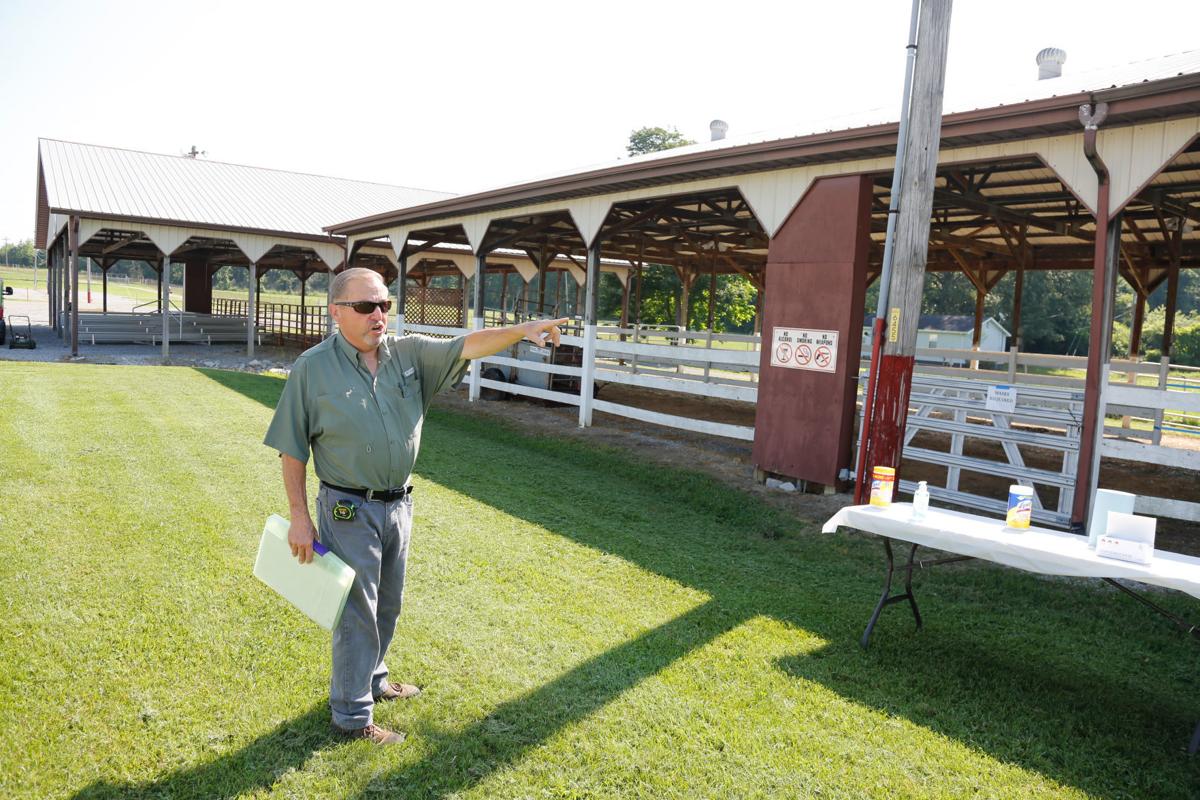 On Thursday, Hopkins County Fair Board Vice President Byron Pruitt showed off the livestock show area for this year’s fair. The fair will not be open to the public, but only livestock and the people who show the animals. 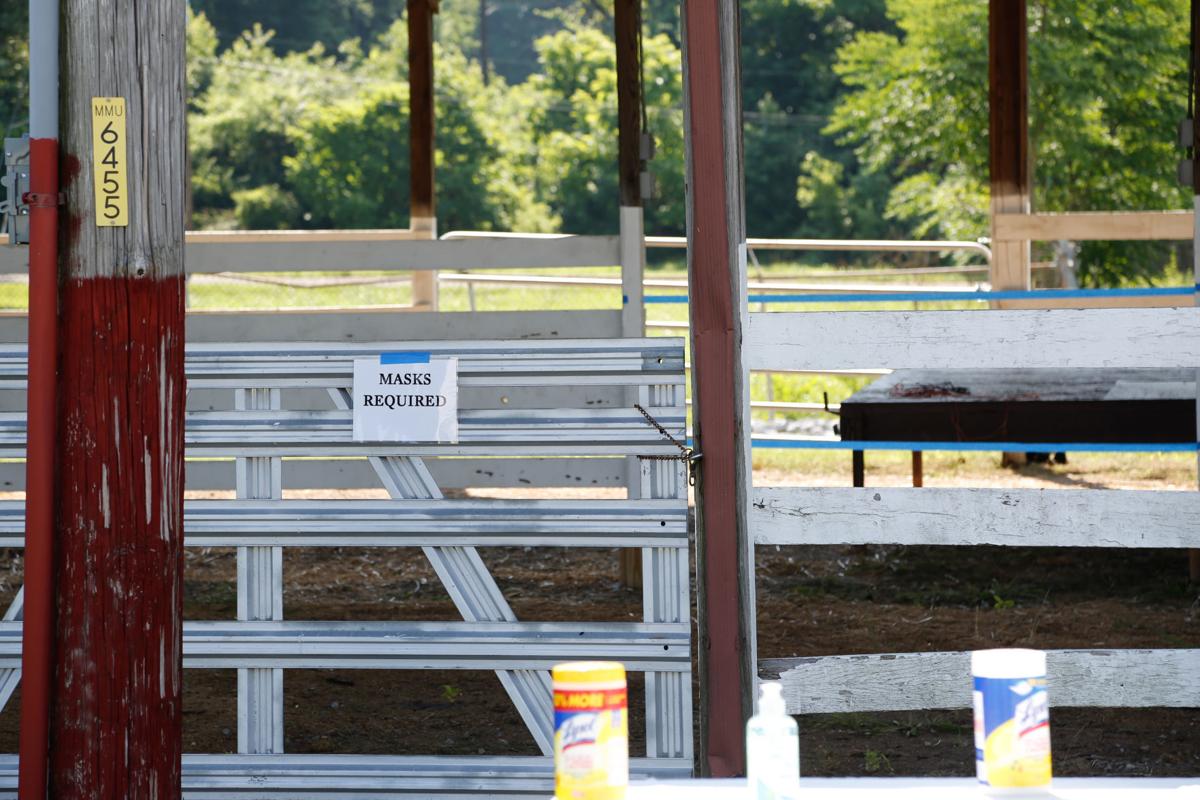 Around the Hopkins County Fairgrounds are new signs that say “Masks Required.” Each participant is required to wear a mask. There is also a hand sanitation station near a show area.

On Thursday, Hopkins County Fair Board Vice President Byron Pruitt showed off the livestock show area for this year’s fair. The fair will not be open to the public, but only livestock and the people who show the animals.

Around the Hopkins County Fairgrounds are new signs that say “Masks Required.” Each participant is required to wear a mask. There is also a hand sanitation station near a show area.

The Hopkins County-Madisonville Fair has been modified into a three-day agricultural exhibit from July 28 to 30 in response to the COVID-19 pandemic, fair officials confirmed.

The event is not open to the general public, and only those competing in the livestock and horticulture exhibits are allowed admittance. New competition procedures and health guidelines will be followed to ensure a safe environment for all staff members and attendees, according to fair officials.

According to Fair Board Vice President Byron Pruitt, the three-day celebration will give those who have been training to compete in the showcase recognition for their efforts.

“They put in so much work throughout the year towards the fair,” Pruitt said. “There’s so much more than getting a blue ribbon. They learn responsibility. They learn how to respect others. They get a rounded education.”

Preparation prior to competition entry, especially in the livestock shows, is often a lengthy and rigorous process, Pruitt said.

“This isn’t something that you go out and grab an animal, and you say, ‘Well I’m taking this thing to the fair,’ ” said Pruitt.

For example, participants in the cattle exhibit spend years in training prior to entering the competition circuit.

The fair board wanted to provide Hopkins County citizens an opportunity of exhibition, according to Pruitt.

Youth involved with 4-H and FFA are encouraged to compete. There is no cost of entry or admittance for any participants, Pruitt said.

The fair will follow guidelines provided by the Kentucky Department of Agriculture and U.S. Centers for Disease Control and Prevention. In addition, the fair board has also been in contact with Mayor Kevin Cotton’s office and the Hopkins County Health Department about further implementation of best health and safety practices.

“We’ll make every effort that is possible to follow those guidelines for our county fair,” Pruitt said.

In adherence to health recommendations, there have been procedural changes to the exhibitions, Pruitt said.

Livestock will have to be washed by the individual prior to entering the fairgrounds. The wash rack will be closed.

“They will not be able to tie their animals in the tie barns and things like that,” Pruitt said. “Basically, they’ll be showing off in their trailers in an effort to keep people socially distanced.”

Youth participants are to wear facial covering at all times except when they are competing in the show ring, Pruitt said.

“It’s quite demanding of the youth that’s showing the animal because they get pretty hot this time of year,” Pruitt said. “It’d be awfully intense for them to have to wear a mask while they were trying to show their animals.”

There will be signs posted throughout the fairgrounds that inform participants when to wear facial covering, according to Pruitt.

The livestock will be lined up in an open-air show area and participants will be spaced at least six feet apart. Only one family member or helper will be allowed to accompany the youth participant in the show area.

Fair employees will also weigh the livestock on scales by themselves with no additional contact from the handlers.

“We’re going to eliminate them having to touch anything other than their animal as much as we can,” Pruitt said.

The 4-H and FFA exhibit hall will not be open for public viewing this year, according to Pruitt. Home and garden entries will be dropped off and checked in on Tuesday, July 28, at the usual destination.

“At this time we’re not planning on anybody going past the area where we’ll be checking those in at,” Pruitt said.

Participants will be able to pick up their projects on Wednesday afternoon.

Participants for the livestock and horticulture events will have to bring their own refreshments, Pruitt said. Restroom facilities will be available but most areas inside the Ballard Center will be sectioned off to avoid non-sanctioned access. Hand sanitizer will be stationed throughout the fairgrounds for frequent usage.

Pageantry events will be held at a later date. More information will be forthcoming.

The fair is sponsored by the Hopkins County Farm Bureau Federation with State Representative Melinda Gibbons Prunty, Land Of Frost and Rural King sponsoring the awards.

The itinerary for the fair is as follows:

All animals will be released at the conclusion of their respective show.

Market lambs: Weigh-in will be on Tuesday, July 28 at 5:30 p.m. Show time will immediately follow the goat showing.