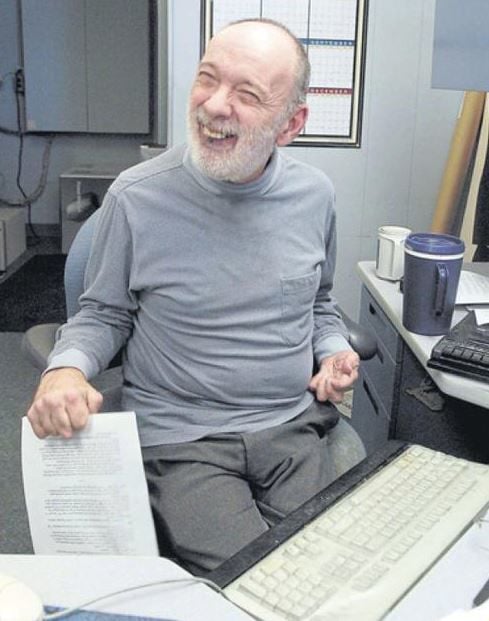 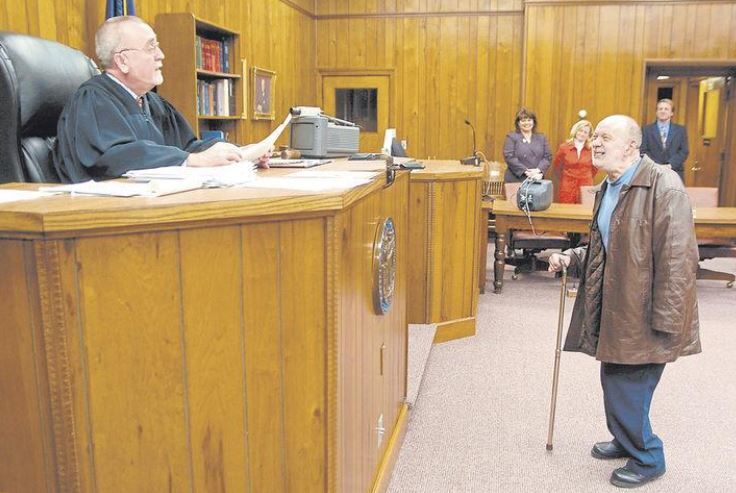 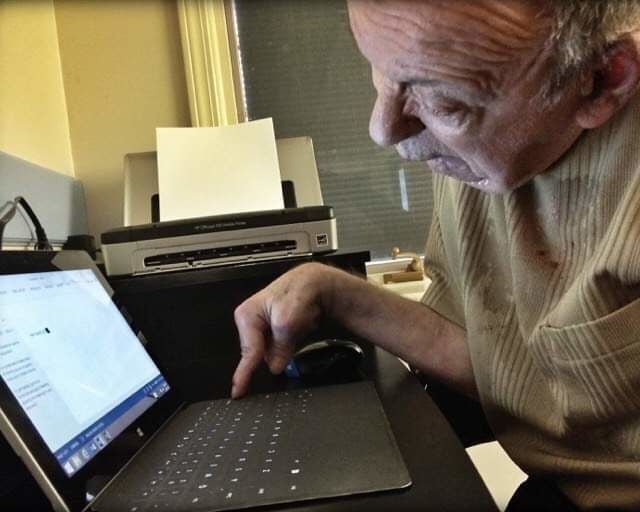 Garth Gamblin spent 82 years defying odds, choosing to find “opportunities” in what most of us would call “handicaps.”

Like the bumblebee that flies, even though its wings are far too small to support its body, Garth accomplished what most might deem impossible.

All who knew him, especially his colleagues in The Messenger newsroom, were privileged to witness feats that might rightly be called miraculous. His body, but not his keen intellect, was ravaged by the effects of cerebral palsy.

With an acute speech impediment, legs that for most of his life caused him to move in a sort of “running stumble,” virtually no use of his left arm and only limited use of his right, Garth’s long life defied multiple odds against him until his passing on Wednesday, June 2.

His career as a professional journalist earned him multiple writing and reporting awards in competition judged by people who knew him only by his work, having never met

There is a tendency to stereotype people with various disabilities, and Garth put aside those erroneous conclusions by living his life doing what might seem impossible.

Garth attended the old Immaculate Conception grade school in Earlington, a few blocks from the home he shared with his parents. When it came time for high school, the public system refused him admittance, suggesting he would not be able to climb the steps.

Garth enrolled in a famous writers correspondence course and yearned for a career in journalism. For many years, he worked as a correspondent for The Messenger, though not as a full-fledged staff member.

In 1981, Garth was hired on a temporary basis to fill in for a reporter on maternity leave. His first week in the office, Garth produced more copy than the rest of the staff combined. He stayed on for two decades, often quipping, “I sure wish that baby would hurry up and be born.”

During his Messenger career, Garth covered virtually every news beat the paper had available. His first love was the court system, where he spent long hours in hearings, trials and meetings with lawyers and judges. All had praise for his understanding of the law and fairness in reporting.

In early days, his notes were scrawled on yellow legal pads in ways that only he could read; but, his accuracy was beyond question. “My ambition is to have the FBI confiscate my notes someday,” he once noted.

At some point he began typing on a laptop computer, using only one slowly guided finger. Because of his speech impediment, he often would type out questions on the laptop for those being interviewed.

Working with Garth, his colleagues learned how often the world misjudges or misunderstands those with physical limitations. Often people who encountered his speech impediment assumed he could not hear well. Those folks would yell their greetings and responses to him. He could hear just fine.

His business card included an inscription on the back that read, “I have a speech impediment. Patience will yield new knowledge for both of us.” That was one of the many ways Garth inspired those close to him.

For several years, The Messenger carried a daily front page article labeled “County Journal.” Garth believed everyone had a story worth telling through this unique feature. Most of those featured were everyday people whom Garth was meeting for the first time. In short order, despite his perceived limitations, Garth became the conduit for their stories.

In the latter part of his career, Garth began writing a signed column for the Opinion page from the mythical town of “Huh.” It was an award winner, generally set in the imaginary “Huh Bar and Grill,” where he took to task people and issues in the news. An avowed “Yellow Dog Democrat,” Garth frequently poked fun at Republicans, who became “Crying Elephants.”

Modest to a fault, Garth would not boast of his accomplishments. He asked for no sympathy and rarely sought assistance. Those who worked with him learned that patience and a relaxed attitude made communication with him easier. They soon learned that if someone on the phone was having difficulty understanding him, they could come to his aid without offending him.

Before joining The Messenger, Garth ran a barely-profitable bookstore in Earlington. One day a notice appeared on a bulletin board advertising a car for sale. A customer, likely in jest, told Garth he would buy the car for Garth if he would learn to drive it. With the help of a few friends, Garth learned to drive. Then, through sheer determination and persistence, he took and passed a driving test.

Getting that license, Garth said, was one of the most significant accomplishments of his life. His only accessory was a steering knob (which I acquired after buying his car when he was no longer able to drive). When age and physical infirmity forced him to stop driving, it was one of the few times I ever felt Garth was discouraged.

In 1983, Garth was recognized as the Kentucky Handicapped Employee of the year. When an Evansville TV station requested an interview with him, he said, “OK, but it might take two days if they want me to talk.” They interviewed me instead. (On a personal note, that interview led to discovery of my birth family. One of the many ways God worked though this remarkable man.)

His quick wit was always at the ready. I once sent him out to interview a 100-year-old woman. “This ought to be good,” he said. “She can’t hear and I can’t talk.” Of course he got the story.

A devout Catholic, he attended both Immaculate Conception in Earlington and Christ The King in Madisonville, where he was a member of the Knights of Columbus. He brought wisdom and insight to many spiritual activities at the church and in the community.

His long-time ambition was to write a published novel. While none of those efforts ever saw print, he did publish a book of personal reflections entitled “God, CP and Me”.

Following his retirement, The Messenger established a scholarship in his name at Madisonville Community College to assist students with physical disabilities. Proceeds from the book went toward that scholarship.

The bumblebee cannot fly, and neither could Garth Gamblin.

Tom Clinton is retired after 32 years as executive editor of The Messenger.