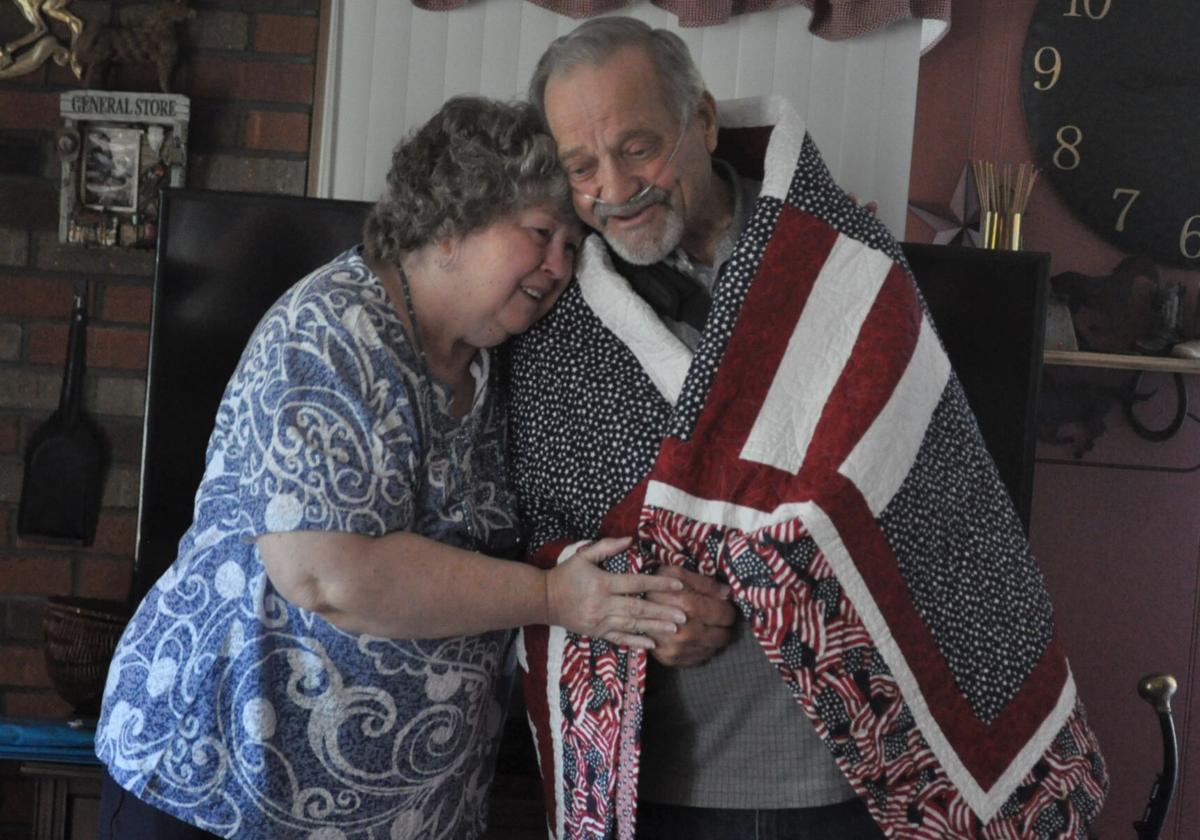 Vicky Ayer, left, a volunteer with Quilts of Valor, hugs Army veteran Chesley Rodgers after he receives his handmade quilt called the Stars and Stripes. 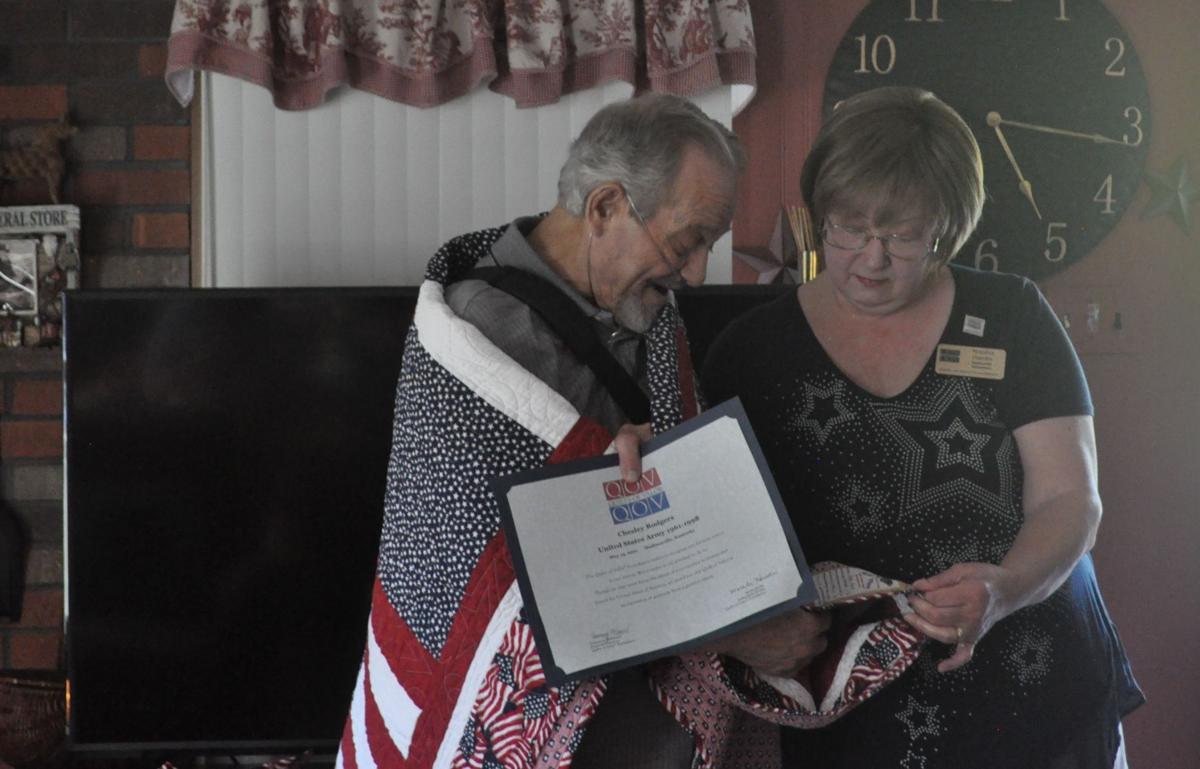 Army veteran Chesley Rodgers and Quilts of Valor volunteer Marsha Hardin look at Rodgers’ name stitched onto the tag of his quilt.

Vicky Ayer, left, a volunteer with Quilts of Valor, hugs Army veteran Chesley Rodgers after he receives his handmade quilt called the Stars and Stripes.

Army veteran Chesley Rodgers and Quilts of Valor volunteer Marsha Hardin look at Rodgers’ name stitched onto the tag of his quilt.

Those who join the military are often called to service because they want to protect the United States and those they love.

Army veteran Chesley Rodgers is one of those men.

“I served the country because I wanted to, and I would do it again,” he said. “I would still be there if I could pass the health exams.”

On Friday, May 14 Rodgers was honored by the Quilts of Valor Foundation with a quilt of his own as an expression of gratitude for his service and sacrifice.

“I don’t have words to express how I feel about it,” he said. “I count it a great honor.”

Rodgers served in the National Guard, the U.S. Army and the Army Reserves for a total of 24 years and four months before retiring in 1998. He was stationed at Fort Knox before going to Korea at the 40th parallel on a peace-keeping assignment. Later he went to Fort Riley in Kansas to serve with the 4th Calvary Unit.

While in Korea, Rodgers said his unit called themselves the “Frozen Chosen” because it was so cold.

“That was the coldest place I have ever been in the wintertime,” he said.

Rodgers was stationed in Germany for three years before transferring to Fort Campbell to help train soldiers who would later be sent to Vietnam.

“My regular Army — I had six years total, and then I was in the reserves all over the south,” said Rodgers.

He said he enjoyed his time in the service as a platoon sergeant and mess hall steward.

Rodgers said he is not sure he deserves the quilt, but he is very thankful he was nominated by his granddaughter, Raven Newton.

Newton said she requested to have Rodgers receive a Quilt of Valor because she is proud of him.

“I am honored that he is my grandpa,” she said.

Marsha Hardin and Vicky Ayer — volunteers with the Quits of Valor Foundation out of Trenton — presented the quilt to Rodgers.

“I just feel it is important to recognize our veterans and what they have done for us,” said Hardin. “This is a very small way for us to do that.”

Hardin said the Quilts of Valor Foundation was started in 2003 by Blue Star mom, Catherine Roberts, who made the first quilt and gave it to a veteran at Walter Reed Hospital.

“Our mission is to honor our service members and veterans who have been touched by war,” said Hardin.

Each quilt is an expression of gratitude and a way to say thank you, she said. The quilts are awarded, they are not gifted or handed out.

Each quilt is given a name by the person who made it to signify its individuality, she said. Rodgers’ quilt was named “Stars and Stripes.” She said his name is also on the label of the quilt “so future generations will know about the service and sacrifice you made for your country,” said Hardin.

Rodgers said he will put the quilt to good use because he is very cold- natured.

“I can wrap up in the quilt and be warm,” he said.