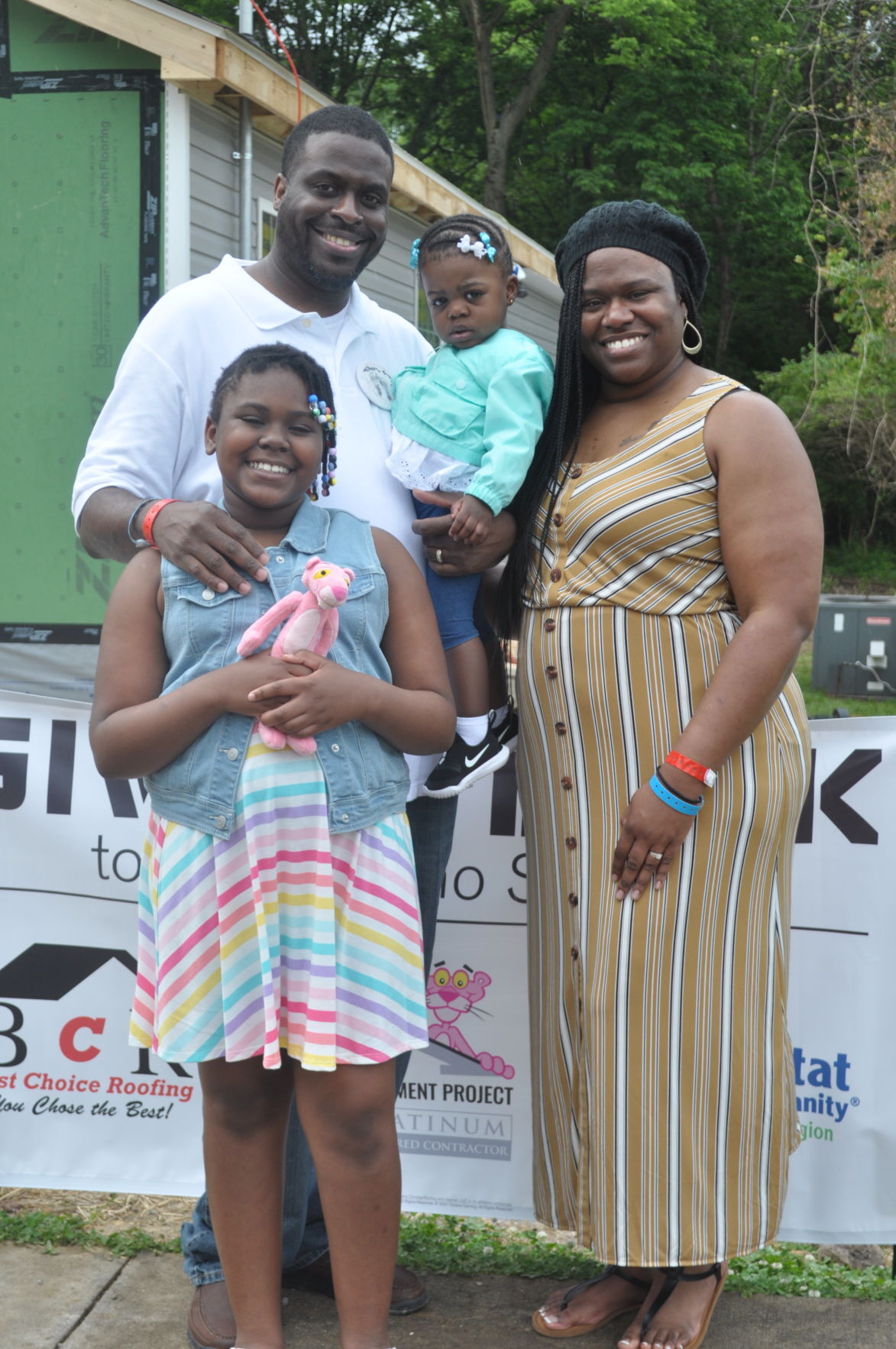 Jermonte Rushing holds daughter, Lynn, as his wife, Erica, and their daughter, Yasmine, stand in front of their soon to be new home. The Rushings have five children in all, including a 2-month-old in a Louisville hospital. 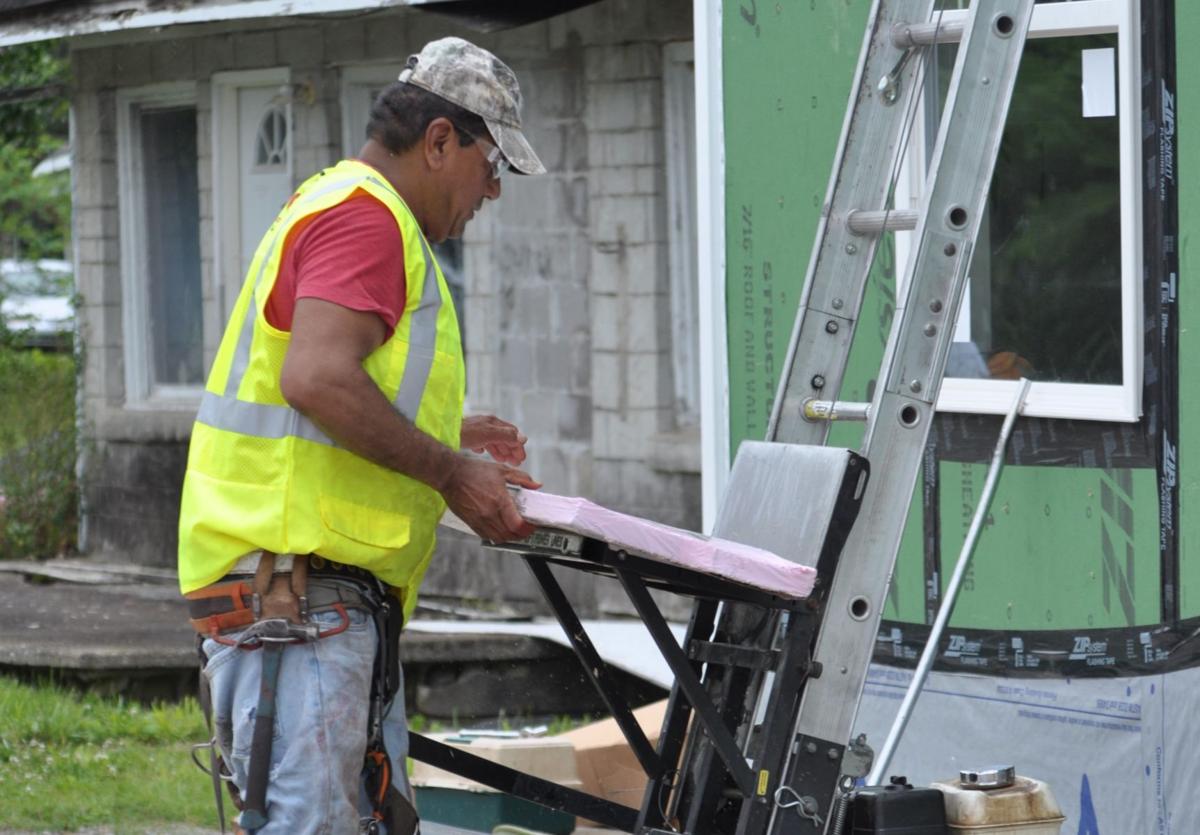 Jorge Campos, an employee with Best Choice Roofing, sends the roofing shingles up to the guys Tuesday morning. 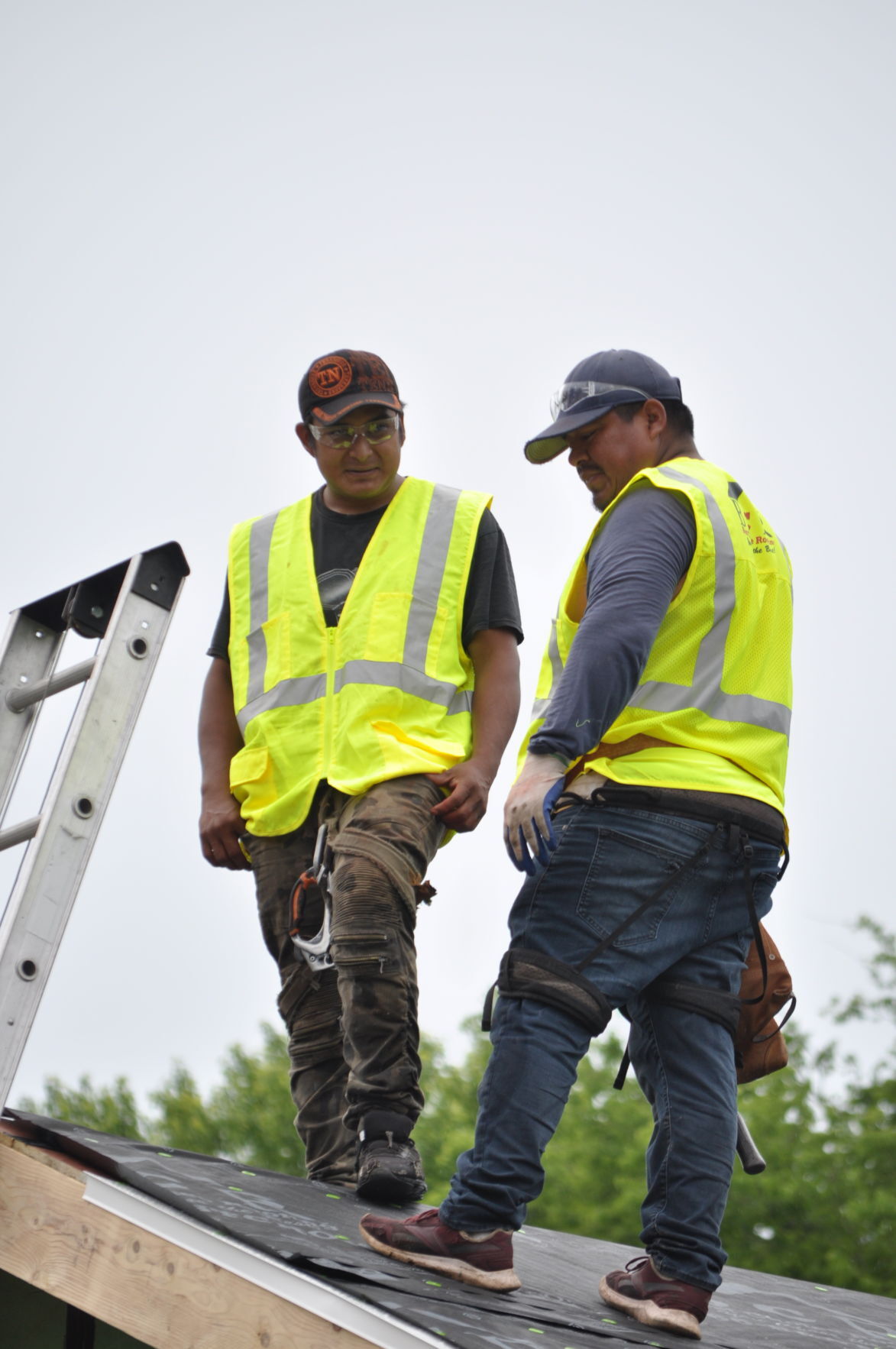 Jermonte Rushing holds daughter, Lynn, as his wife, Erica, and their daughter, Yasmine, stand in front of their soon to be new home. The Rushings have five children in all, including a 2-month-old in a Louisville hospital.

Jorge Campos, an employee with Best Choice Roofing, sends the roofing shingles up to the guys Tuesday morning.

With a 2-month-old daughter in a Louisville hospital and four more children to care for, Jermonte Rushing and his wife, Erica, fully realize just how important having a home to call their own will be as they work to raise a family in Madisonville.

Allison was born at 23 weeks and weighed just one pound and three ounces at birth. She has lived her entire life in the NICU at Norton’s Hospital. Getting stronger and putting on weight, Allison will hopefully be coming home soon — and home will be getting much better for the Rushings in the coming weeks as completion nears on their house that is a combined effort of the Habitat for Humanity of the Pennyrile Region and the Hopkins County Home Builders Association.

Rushing refers to the home as a “blessing.”

“Just seeing everything come together, it is a blessing for me, my wife and our children,” he said.

Rushing served seven years in the United States Air Force before being honorably discharged. In addition to Allison, the Rushings’ children include — Omar, 15; Zhea, 11; Yasmine, 10; and Lynn, 18 months.

The Rushings have a projected date to move in around late June or early July, which will hopefully coincide with bringing their daughter home from the hospital.

“From the time she was born, she’s a fighter,” said Jermonte. “While we had a miracle being born, we have a miracle happening here.”

For Erica, the house — located at 454 East Noel Avenue — has been a long time coming and they have been thankful for everyone who has helped them along the journey.

“I am in awe from the foundation to the roofing,” she said.

Rushing said the contractors have worked hard to get their house ready for his family.

“We are grateful, and we are blessed because of them,” he said.

Habitat Executive Director Heath Duncan said the build is a partnership with the Hopkins County Home Builders Association and is designated as a veteran build by Habitat International.

“Because of that, we have access to some extra building supplies,” he said.

Since Rushing is a veteran, the house qualifies for the Owens Corning National Roof Deployment Project, where they supply the roof shingles and labor at no cost with the help of Best Choice Roofing.

“They do that for veterans only,” said Duncan.

Brandy Cook, general manager for Best Choice Roofing in Bowling Green, said this was her branch’s first time participating in the program to provide a new roof.

“Some of our other branches have done some projects with Owens Corning and the roof deployment, but this is our first one here in Kentucky,” she said.

When she first heard about the program, she said she thought it was awesome and something she look forward to being a part of.

“What they have done for this country, this is a small drop in the bucket for what they deserve,” said Cook, who explained while Best Choice is donating the labor, the materials were donated by Owens Corning.

“We are just happy to be here, happy to partner with Owens Corning,” said Cook. “Roofing is our business, but we care about our community.”