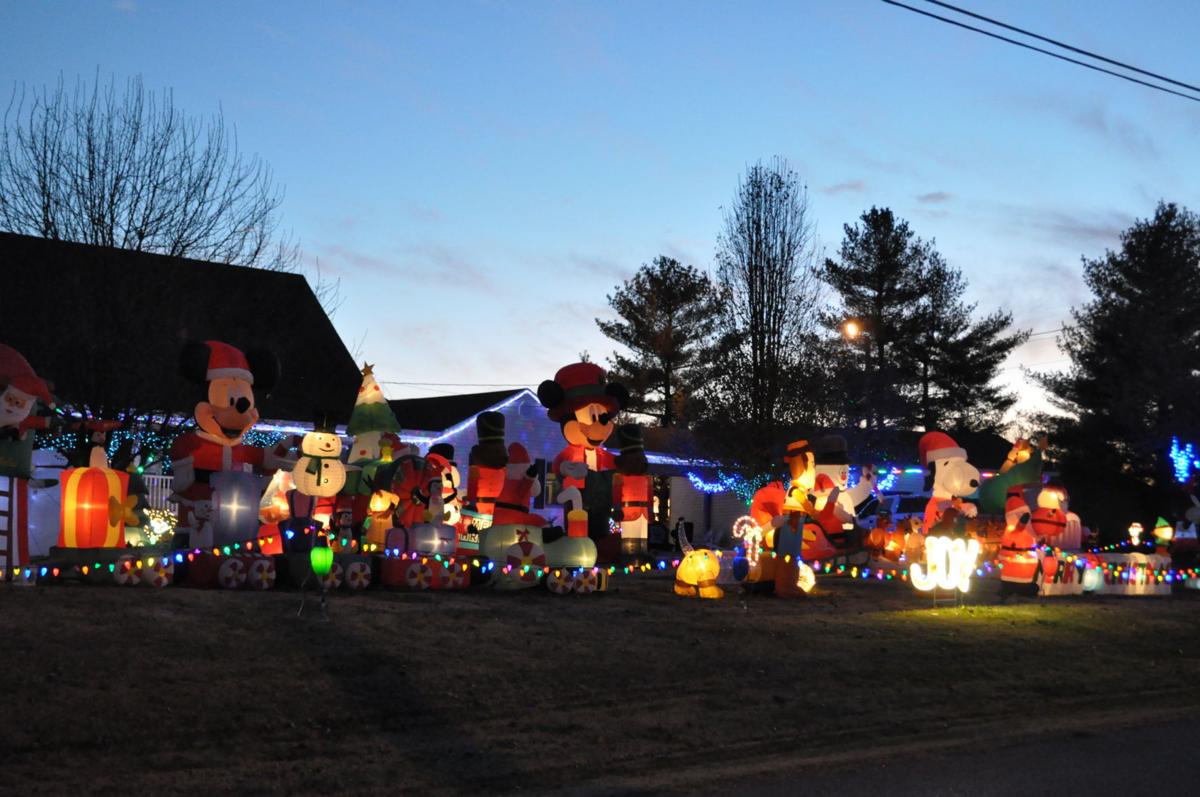 The Utley house on Pleasant View Road in Madisonville has become a must-see due to the many Christmas decorations that fill the yard this time of the year. 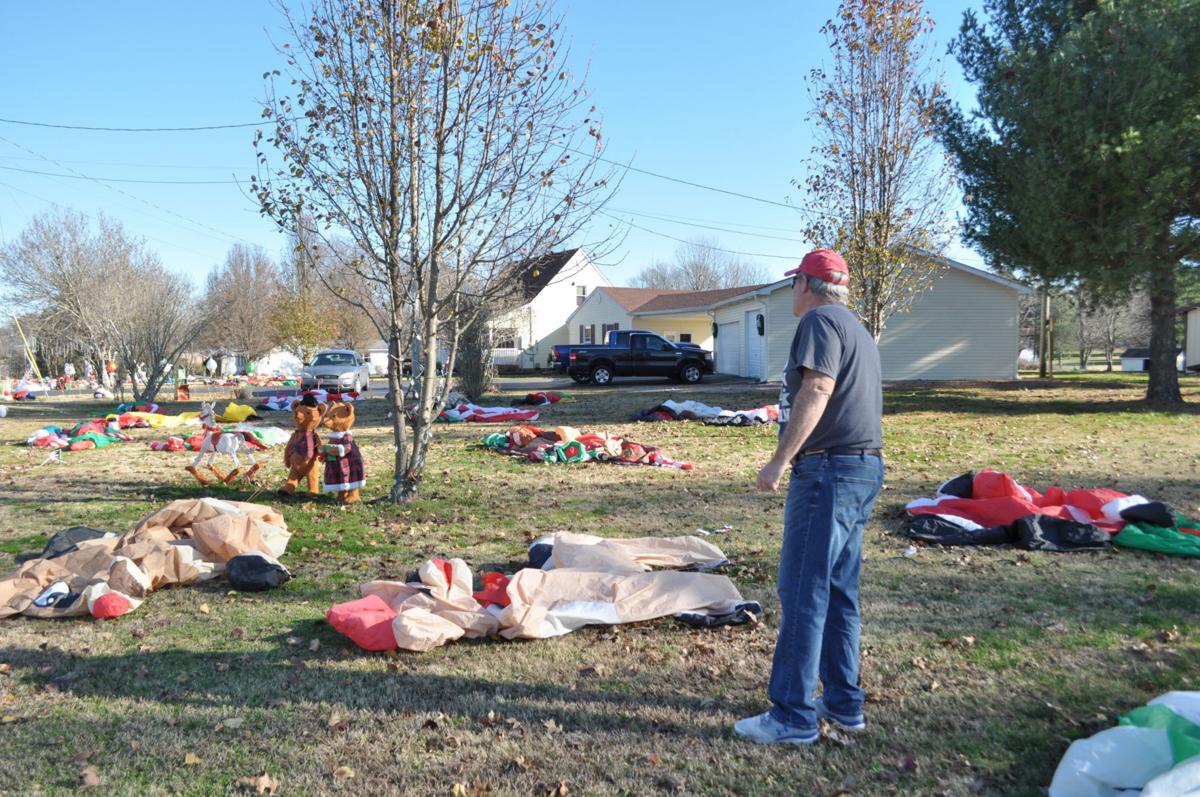 Perry Utley looks out at the large amount of Christmas decorations on the front of his lawn. Over the years, the decorations have expanded into part of his neighbor’s front lawn.

The Utley house on Pleasant View Road in Madisonville has become a must-see due to the many Christmas decorations that fill the yard this time of the year.

Perry Utley looks out at the large amount of Christmas decorations on the front of his lawn. Over the years, the decorations have expanded into part of his neighbor’s front lawn.

Perry and Shannon Utley wanted to bring some joy to children during the holiday season so they started decorating their house in Christmas lights about eight years ago.

And what started as a gesture for the kids has turned into a tradition that families look forward to every year as the holidays approach.

“There are a lot of kids that don’t have anything, and if it brings them a little joy, that is what it is about,” said Perry.

Chances are you are familiar with the house on Pleasant View Road owned by the Utleys that has become a must-see for locals this time of year.

Perry said driving around and looking at the Christmas lights was a family tradition when he was growing up. After he got married and had kids, he continued that tradition with his kids but quickly realized not many people were decorating like in past years.

“People had just stopped doing it, and it broke my heart because it was something I had always done as a child and it was like nobody cared anymore,” said Perry.

After retiring from Kentucky Utilities, Perry realized he wanted to stay busy and thought going all out for Christmas would be something kids would enjoy.

What started with lights on the house and bushes, grew to include inflatable characters. The first ones he bought were a 15-foot Santa Claus and a Frosty the Snowman. Both were retired this year due to wear and tear.

“It just kept getting bigger because people kept talking about how much they loved it and how much their kids enjoyed it,” said Perry.

Things really took off when the couple purchased Bumble from Rudolf the Red Nosed Reindeer, he said. They found the island of misfit toys to go with Bumble and they decided to make themes.

The Utleys now feature a Mickey Mouse theme, a Minion theme, some inflatables from National Lampoon’s Christmas Vacation and a lot more.

“It is just different stuff that we put together,” he said. “The hardest part is trying to figure out where everything is going to go.”

Over the years some of the inflatables have stopped working for one reason or another and the couple has had to purchase new ones. Things are moved around to make room for new additions and to keep things interesting.

As far as expanding decorations, Perry said they are at the maximum capacity for displaying the inflatable characters. The only option left is to change up the lights and add more. The decorations have grown so much that they take up the three lots they own and Perry had to ask a neighbor to use part of his front yard for needed space.

Utley said a lot of the inflatables displayed are because of his wife who will purchase them after Christmas when the sales hit.

“She is always looking for new ones,” he said. “She loves it.”

For awhile, Perry had all the decorations set up on the same power source so everything would come on at the same time. Changes to that plan had to occur when the inflatables were added because he doesn’t activate those when high winds are forecasted.

“That wasn’t working because so many people were coming by when the wind was blowing 20 miles an hour,” said Utley.

So Perry sat down this year and rewired everything so now the inflatable characters have a different on switch than the rest of the decorations. When the wind picks up he can turn on the lights without worrying about damaging the inflatables.

Perry said they start working on the decorations around the first of October because they need to evaluate the inflatable characters tp determine what is working and what needs to be replaced.

“There is a whole lot more that goes into this than people realize,” he said.

The first decorations the Utleys put out are the lights because they are the easiest. He said they wait until the leaves fall off the trees before putting out the inflatable characters because the leaves can get in the motors and cause problems.

The goal is to have all the decorations up by Thanksgiving or at least Dec. 1 because that is his birthday. When they first started, they would wait until after Thanksgiving to start setting up decorations, but it became more time consuming as the layout grew.

“If you wait, you will never get it done,” said Utley. “It is just overwhelming.”

The Utleys leave the lights and decorations up until after New Year so people and families can still enjoy them. Once Jan. 2 comes around, they spend around two weeks taking everything down and putting it away.

Perry said they probably have around 90 to 100 inflatable characters and has around $8,000 to $10,000 put into Christmas decorations. He said a lot of it has been accumulated over the years.

“We love watching people drive by and look at it because we know they are enjoying it,” he said. “That is the whole reason for doing it, if it wasn’t then I sure wouldn’t do it because it is a whole lot of work.”