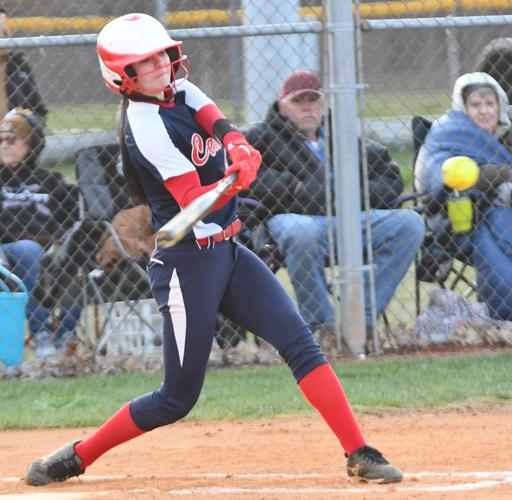 Keira Bryan pitched four hitless innings against McLean County on Monday night, while having a perfect night from the plate. She finished 5-for-5 with two doubles and four RBIs. 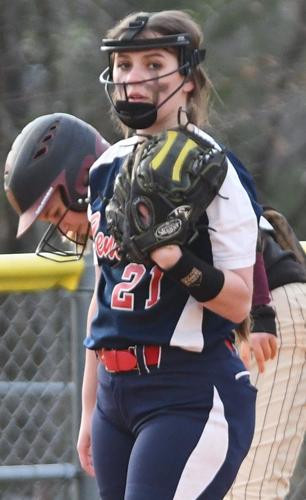 Keira Bryan pitched four hitless innings against McLean County on Monday night, while having a perfect night from the plate. She finished 5-for-5 with two doubles and four RBIs.

Hopkins County Central rolled into McLean County on Monday looking to break a three game losing streak. They did just that as sophomore Keira Bryan showed herself to be a threat on both sides of the ball, throwing four hitless innings from the circle while having a perfect night from the plate, scoring four RBIs for the Lady Storm.

Multiple times the Lady Cougars managed to get the Lady Storm backed into a corner with runners in scoring position, but Central managed to escape while holding onto the lead. In a contest that saw a total of 21 hits, the Lady Storm held on to take their first win of the season at 14-7.

Aly McCord took a walk to open the game. Amelia Johnson was hit by a pitch, moving McCord to second and setting the field for Keira Bryan to get the first RBI of the night by sending a hard ground ball down the third base line. Despite loading the bases in the bottom half, the Lady Cougars were unable follow through and the period ended with Central up 1-0.

In the top of the second, Julie Harris was hit by a pitch, Caroline Wilson knocked a line drive to center and Johnson was hit by her second pitch of the night to load the bases. A double by Bryan would score Harris and Johnson, giving the Lady Storm a 3-0 lead. Johnson would then score on a wild pitch to make it 4-0.

In the bottom of the second, the Lady Cougars rallied, posting three runs to pull within one at 4-3.

Alyssa Blanchard was hit by a pitch in the top of the third. Emily Ballard popped out, but moved the runner to second. Harris picked up an RBI on a fly ball single to right. McCord was then hit by a pitch, but the Lady Storm were unable to convert and the inning ended with Central up 5-3.

McLean County loaded the bases in the bottom of the third with just one out on the board. They managed to get four runs across the plate before the Lady Maroons get get out of the inning, going up 7-5 five heading into the fourth.

Johnson was hit by a pitch to start the top of the fourth inning. the seventh time a member of the Lady Maroon squad was hit on the night. Bryan then singled to put two runners on. Brinkley Armstrong then grounded out to third, allowing Johnson to score, and Bryan scored on a steal of home. The Lady Cougars held on to get out of the half with a 7-7 tie, but the Maroons held them to three-up and three-down in the bottom half of the inning thanks to fielding.

Harris led-off the Lady Storm line-up in the top of the fifth with a walk. She then stole second and third to get within scoring position. A single by Johnson sent her home, giving the lead back to Hopkins Central at 8-7. Johnson then stole second and third before getting driven home on a single by Bryan to make it 9-7. Armstrong sent a pop fly to right field, moving the Lady Storm to 10-7 before the Lady Cougars could grab the third out of the box.

Despite allowing two runners on during the bottom half, the Lady Storm managed to get out of the fifth without letting McLean county score.

Not your dad's bod: J.J. Watt flaunts his physique as he prepares for fatherhood

LASHOF Class of 2022 took a village to build to success

Blanchard singled to start the top of the sixth. Ballard hit a ground ball and reached on an error, then McCord hit a hard fly ball to left, scoring both runners and extending the Lady Storm lead to 13-7.

The Lady Cougars again loaded the bases in the bottom of the sixth, and again the Lady Storm managed to escape without allowing a run.

In Central’s final at bat, Armstrong reached on a double to center field, then scored on a wild pitch to make it 14-7, giving her team a little bigger buffer headed into the bottom half, where the Lady Cougars went three-up, three-down to give the Lady Storm their first win of the short season at 14-7.

They advance to 1-3 on the season.

Bryan also had a big night at the plate. The sophomore went 5-for-5 with a pair of double as four RBIs.